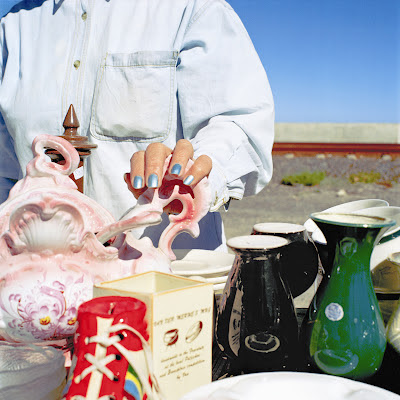 In Vladislavic’s essay, On Flea Markets and other objects, in which he juxtaposes the display characteristics employed in formalised retail settings with those in informal ones such as at a market, he draws attention to the ways in which the trade of second-hand goods presents an alternative to mall culture.
As there are fewer manipulative strategies at work to encourage consumption, he implies that the market is a more honest, authentic environment.

The fact that traders at Milnerton must battle with the elements further underscores the way this brand of trading is less artificial and enjoys a closer relationship to nature. This environment shapes  the nature of  the transactions that take place at a market like Milnerton, which Vladislavic says encourage conservation rather than consumption.

He suggests that encountering objects at the end of their lifespan mocks “the fantasy of ownership” and serves as a reminder of mortality. The photographs in Dudley’s book demonstrate that  disused objects do sometimes enjoy another life (as décor in a restaurant) that intersects with patterns of consumption, though under the guise of being an alternative to it. This doesn’t detract from Vladislavic’s observation – certainly in the market setting these old objects are at a point between owners and the terms of their use is temporarily undefined. It is interesting to ponder what might be lost in the recontextualisation of old objects. Loss, or as Southwood puts it, “patterns of redundancy”, is the underlying theme in this book.
Continuing in the vein of privileging the dated over the new, Vladislavic is nostalgic about out-of-date objects, as he details the ways in which these items evoke both personal and collective histories.

As such an oversized silver fork recalls family meals at his aunt’s during his childhood but also a time when “silverware was for people with servants”. In this way we are reminded of the mnemonic power attached to these disused goods, which draws customers, searching to reclaim what they have lost. The traders at the Milnerton Market are mostly impoverished whites, former employees of once white-dominated parastatals, who are literally trading their memories and histories to sustain themselves – it is proposed that the market provides their only source of income.

From this perspective Southwood’s study of the market evokes a narrative underpinned by political and social defeat. Undoubtedly, his subjects’ redundancy echoes in the apparent uselessness of the products they sell. Powell is bemused to discover an M-Net decoder from the Nineties for sale. Given this object would have little use to anyone, he concludes that it was never intended for sale but rather to affirm the trader’s status as an owner. With their lined faces and dated outfits, Southwood’s subjects appear as out-of-date as the objects they flog, substantiating their status as living artefacts.

This phenomenon works at playing tricks on the mind; because the colours  and styles of the clothing and objects evoke different eras you are unable to identify the decade/year the photos were taken. The date in the caption almost always feels incongruent with the scene. Much attention has been paid to the book’s format. Southwood bucks the trend in art photography books by allowing for generous white borders around photographs and presenting some smaller ones. This is in line with Southwood’s desire to downplay the work as art and affirm his assertion that photography is “everyman’s pursuit”.
This is motivated by his wish for the book to become an artefact of the market. The recycled cardboard cover and stencilled lettering recalls the handmade signboards used at the market.

In this way his mode of documentation and display is so closely aligned to its subject that it doesn’t appear like a representation of it - the boundaries between the two have collapsed. This links up with this notion that the outdated is more valuable than something current.

In a sense, Southwood wishes to insert his work into the past, though one doubts he would be happy if it was a discarded, redundant object. This is an unlikely outcome for some time; his work couldn’t be more in tune with the present. - published in The Sunday Independent, April 22, 2012.
Posted by Mary Corrigall at 9:27 AM