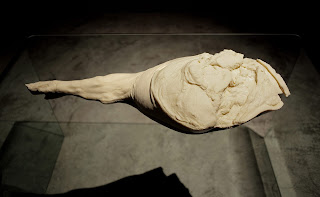 
4. Fools Gold by Stephen Hobbs at David Krut:
After decades of producing art, this was Hobbs’s first exhibition since committing to a formal relationship with a commercial dealer. It was expected to constrain his work, particularly given that Hobbs has a penchant for ephemeral work, installations and public performance. Nevertheless, the limitations of the gallery context were the catalyst for a well-conceived show that played with the notion of scale and practical constraints, particularly in the realm of architecture – a sphere of production that Hobbs has been concerned with for some time. Hobbs’s solution to the physical limitations was to present small replicas of larger grand-scale works that could never actually materialise as they involved remodelling famous American skyscrapers such as the Empire State Building. This exhibition was very much centred on translating ideas into objects and the politics and realities that shaped the final products. Ultimately Hobbs implied that the objects he presented were a residue of ideas and that the purest artistic visions could only ever be intangible.

5. Asymptote, choreographed and created by Vincent Truter: the 2010 Dance Umbrella:
This was a truly interdisciplinary affair with the same level of attention paid to the animation, costume, and music all designed to complement a Butoh dance, an avant garde Japanese dance form.
Performed by Frauke (Caroline Lundblad), a Swedish Butoh practitioner, the performance was a multisensory experience which set new standards for dance by demonstrating how contemporary dancers/choreographers can exploit every dimension of performance.
Butoh is a mesmerising form of dance characterised by subtle and nuanced kinetics.
The slow movements and inertness of the postures is almost the antithesis of what we expect of dance.
Nevertheless, the level of stillness and the obvious control required to enact these gestures brought into focus the power of inactivity and the way in which dance can allow for the letting go of the self through increased awareness of the body.
It’s a fascinating form of dance and this presence of it on local stages can only invigorate contemporary practice here, where the focus has been centred on concepts rather than forms.

6. Girl in the Yellow Dress: written by Craig Higginson and directed by Malcolm Purkey – Baxter and Market theatres: This tightly written play revolved on the dynamics between perpetrators/victims, whites/blacks, Africans/Europeans – a staple South African trope. However, Higginson transposed it to a European context so that this theme was posited as a universal one. This impulse very much chimes with shifts in all spheres of the arts where there has been a move away from navel gazing, or at least finding ways in which self-reflection could play out in less obvious ways.
By setting the conflict between an African and a European on European soil, Higginson also creates an objective distance from which South Africans are able to observe the set patterns of relationships.
Ultimately Higginson’s play mapped an encounter between the self and other during a time at which those roles have become totally muddled: who is the self, who is the other?
Higginson suggested that not only do we need to look beyond stereotypes, but that we have to stop being complicit in adopting them in order to meet others expectations.

7. X-Homes, curated by Christopher Gurk and funded by the Goethe Institute at Hillbrow/|Kliptown:
Site-specific performance is nothing new to Joburgers. In particular artists such as Hobbs, Marcus Neustetter and Anthea Moys have created work for sites around the city, which have served as pertinent settings to address issues tied to this divided urban landscape governed by invisible boundaries.
However, what made this particular project unique was the manner in which it used a multi-prong approach to unpacking the politics of no-go areas in the city.
Not only were audiences – which were made up of very small groups – treated to a number of different performances that related to a different aspect of the setting but because the acts played out in the intimate settings of people’s homes, they were able to come to grips with other people’s realities.
Travelling between these homes also offered rich insights into either the township setting (Kliptown) or Hillbrow. The types of performance works were quite diverse too; from musical, to theatrical, to performance art and certainly the boundaries between these disciplines was quite blurred as was the relationship between fact and fiction.
It was an enthralling artistic project that has advanced new possibilities for presenting work.

8. AZA Architecture Biennale 2010:
Though the hefty registration fee kept most of Joburg’s creative intelligentsia away from this conference, this architectural themed biennale was jam-packed with a fascinating array of talks centred mostly on Joburg.
Though most of the speakers were local, luminaries in the architectural fraternity such as the theorist Michael Sorkin contributed to the discussions. Interestingly the debates weren’t centred on unpacking the marvels of grand sophisticated edifices that typically mark the achievements of this discipline but rather the interdisciplinary slant that informed the conference directed attention towards engaging with overlooked architectural and social oddities that form part of Joburg’s diverse urban landscape. Photographers, musicians, artists, art historians and writers participated, all using tools specific to their craft to engage with the politics of urbanisation in a shifting socio-political context.

9. 1910-2010: Pierneef to Gugulective, curated by Riason Naidoo at the Iziko South African National Gallery:
Naidoo had just taken over as director of the gallery, and usurping funds designated for a football-themed exhibition to tie in with the World Cup, he curated a mega-exhibition that charted the narrative of South African art over a century. The idea was to give tourists an overview of not only the history of art in this country but its political history – given that the two are not mutually exclusive. Because the exhibition covered such diverse periods, Naidoo resisted presenting it under the banner of a single theme, choosing rather to allow many different (and sometimes opposing) discrete narratives and tropes to emerge from the positioning of the eclectic range of artworks. Though the exhibition was chronologically arranged Naidoo inserted a few irreverent contemporary works that engaged with history or juxtaposed famous works with works by little-known artists that engendered new readings or broadened the scope of particular periods.

10. THIS IS YOUR WORLD IN WHICH WE GROW, AND WE WILL GROW TO HATE YOU by Michael MacGarry at Brodie-Stevenson Gallery:
This exhibition of work by the Standard Bank Visual Artist for 2010 presented his strongest work to date.
South Africa has a long history of artists engaging with the political conditions of their time but typically they embrace either a didactic stance or probe the more abstract and psychological consequences.
MacGarry is concerned with the mechanics of power, the systems that maintain it. With this show he settled on a visual language that addressed the ideological and economic systems that underpin political machinations.
MacGarry didn’t proffer glib or predictable insights into our political landscape; after engaging in extensive research and taking inspiration from Moeletsi Mbeki’s 2009 book Architects of Poverty: Why Africa’s Capitalism needs Changing, he exposed instances of neo-colonialism, showing how African governments are perpetuating the plunder of natural resources in the manner of their colonial predecessors.
MacGarry didn’t simply illustrate his findings but produced a series of haunting sculptures that evoked the vocabulary of traditional African material culture while hitting at the heart of a contemporary phenomenon.
This was a sophisticated exhibition that boasted some unforgettable visual statements. - published in The Sunday Independent, January 2, 2011.
Posted by Mary Corrigall at 1:12 AM

The task you have set yourself here seems a tad bit ambitious don't you think? And by which criteria do you judge which showcases are worthy of being described as the crowning moments of all 2010 cultural events...?

So few critics reflect on production across various disciplines; the idea here was to round up and juxtapose diverse works. There is no set criteria - how can there be? This is why an explanation contextualising the significance accompanies each choice. It may well be a flawed project but what is the alternative? No acknowledgement at all?