When history is broken 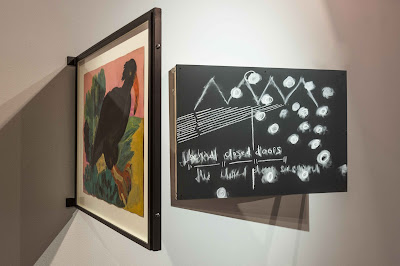 As with all the new works created by the recipients of the Standard Bank Young Artist Award (SBYAA) who make their debut at the National Arts Festival, the visual arts winner’s exhibition is always subjected to intense scrutiny. It is the source of such focus for the visual arts community mostly due to the fact that the festival continues to sideline this sector. The organisers say it is due to a lack of appropriate venues for art and down to the fact that exhibitions don’t fit into their business model: they can’t charge tickets for people to view them – only for walkabouts – and those are limited.

And so it is that the winner of the Standard Bank Young Artist award carries the burden of presenting the ‘highlight’ for the visual arts for the festival. It sucks because they also have to present their work in one of the worst venues for visual arts, the Monument Gallery, which reminds me a bit of my dreary office in Sauer Street. Please god may an artist who wins the prize in the future make some sort of architectonic intervention in this space. In truth the SBYAA winner usually grows the exhibition over time as it moves from venue to venue, finally landing up at the Standard Bank Gallery, where it exists in its optimal state. Unfortunately, by then everyone has stopped writing and analysing their show – the story has gone cold, so to speak.

The Grahamstown showing presents the moment in which the artist must prove they are worthy of the accolade they have received.  Kemang Wa Lehulere found the ideal solution to this custom; in History Will Break Your Heart he mostly presents the work and life of other artists, thereby cunningly shifting attention away from himself. This was clearly articulated in the publicity material available at the exhibition, where his biography is preceded by that of artists Gladys “Nomfanekiso” Mgudlandlu and Ernest Mancoba.  In this way he sort of also inserts himself into history – joins them.
In presenting the works of Mgudlandlu and dated footage of Mancoba narrating his life story, Wa Lehulere has seemingly found an expedient way to avoid risk and fill a room with art (in a short amount of time) that is above criticism.

Fortunately, this novel solution is clever in other ways too – he appears to have found a way to reinsert (art) history into the present/the now – this exhibition is always viewed as being an expression of what’s hot in contemporary art. In so doing he also poses the question that art perennially asks: what is art? Is curating works, making documentaries, art? Might a curator or art historian get a bash at winning this award in future, stretching the definition of artist a little further?

You could argue that Mikhail Subotzky posed these same questions a few years ago when he took the prize and also ‘curated’ existing work (drawn from his own photo collection) and footage, though he too made a new documentary.
Not that Wa Lehulere limits his talents to curating. Each Mgudlandlu work he presents is pared with angled blackboards bearing crude drawings in white chalk, drawing attention to gaps, absent works. This refers to not only works that are missing from the archive but were never made – the times in which Mgudlandlu made her art limited what it could be. These also function as ‘mirrors’ as alluded to in the title, Does this mirror have a memory, though they do not reflect the image which they face but rather operate as a site of retrieval, where memories of her work, both real or fictional can be re-imagined, reconstructed and erased – it’s a never-ending process, as is the act of remembrance and digging into history, beyond art history.

There is an installation too – Another Homeless Song (for RRR Dhlomo), an arrangement of salvaged school desks at the centre of the gallery, further driving home this school, instructional theme. We are in the process of relearning the narratives about people who were erased from the history books and reclaiming those “firsts” – was R.R.R. Dhlomo’s first novella, An African Tragedy, the first work of fiction by a black South African to appear in book form? Mgulandlu was also supposedly the “first” black woman to stage an exhibition – a fact that Nontobeko Ntombela, the curator of A Fragile Archive, challenged in an exhibition of her work, in which she made clear the gaps in this artist’s ‘narrative’ via blank spaces on the walls of the Joburg Art Gallery, where it was staged in 2012. Wa Lehulere’s exhibition is impossible to imagine without Ntombela’s – in a way it is an extension of it, if not with more expressive interventions. Does Wa Lehulere take it far enough? How does he extend the discourse? We have to ask this because he has entered into the space of art history, where these questions become pertinent in assessing the ‘value’ of the show. He could take it further not only conceptually, but visually too and he probably intends to as the show travels.

Wa Lehulere brings these legendary ‘firsts’ together in a room without challenging those titles – which Ntombela showed in a Fragile Archive to be not only inaccurate but as such they act as a foil for the messier histories they conceal. The blackboards facing Mgulandlu’s works which are angled to face them could be an instructive way to reveal what they conceal, or they function as this blank space upon which anything can be projected. In this way the act of retrieval is as corrupt as the narratives that they are meant to displace and the art object functions as this silent witness to history that appears to ‘reveal’ so much – it is a visual manifestation of a time and place – yet speaks in a vocabulary that is vulnerable to reinterpretation.

Ntombela made this point – the only way Wa Lehulere takes it forward is via inserting his own abstract response to the work – which is his “work”  - in this way he continues in the tradition of western art where he responds to a history that preceded him to take him forwards – except he ends up in this no-mans land, because his ‘anchors’ are seemingly unstable and he appears interested in returning and recouping a place in the past rather than moving forward.

History hasn’t ‘broken his heart’, history is broken, and the chronology is disrupted because of this desire to recuperate that which is lost.  In the film, The Bird Lady, in nine layers of time, Wa Lehulere documents a process of trying to uncover an artwork Mgudlandlu created in a home in which she had lived. It cannot be reclaimed – there are too many layers concealing it. This is an obvious metaphor for the difficulties entailed in cultural recuperation in the post-apartheid era.
Art historians, curators, theorists and writers have long focused on the incompleteness of archival records, which prevent reconstructing history. Wa Lehulere follows this line, but also seems to direct our attention to the ways in which the narrative is immovable. In the stop-motion footage of recreating a Mancoba work, it seems obvious that every one of Mancoba’s strokes was informed by the moment – his background in South Africa, the racism in France and the inability for anyone to see him and his work beyond his racial identity. This is the tragedy of his existence; he tried to outrun his identity when he moved to France, but was immured to white supremacist societies and no re-reading of history, no act of recuperation can set him free. Even in this exhibition, which is not bound to art historical conventions as such, Wa Lehulere himself is trapped within this well-worn narrative of failed retrieval as the conceptual pivot rather than the art itself. In other words Mancoba isn’t  represented in this show because of his art or contribution towards it but due to his inability to ‘contribute’ – this becomes the marker of his place in history. – an edited version of this was first published in The Star, Cape Argus July 10, 2015.

Posted by Mary Corrigall at 5:40 AM