Been there, done that but left with a different T-shirt. 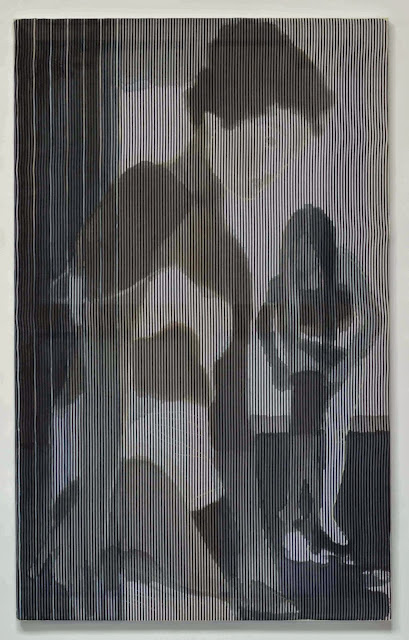 Painting is a bit like art criticism. Well, not really. But it is a good opening line, and I wish it were true because while both art criticism and painting have survived several well-publicised deaths, painting’s renewal seems to be well within reach. Particularly, these days when despite the fact that we thought its life had come to an abrupt end when abstract modernists worked themselves into a lifeless black hole and pop, found objects and appropriation become the mode du jour, burying the notion of the new under the rubble of a well, weighty history, contemporary painters do appear to be reaching towards invention. Note: ‘reaching’; much of these efforts have relied on superficial gimmicks – painting with toothpaste and detergent, emulating digital renderings of painted lines with paint (so very-very meta-meta) and appropriating other canvases or compositions from famous paintings as in the work of Cullen Washington Jnr and Paul Bloodgood, two artists who showed at Saatchi’s Abstract America Today exhibition last year. Or making a thing out of the oil stains. No names. Have painters ever been so up their own…?

A renewed interest in abstraction, which that Saatchi exhibition signals, has paved the way for novelty and invention to be part of the painter’s vocabulary again, though at times these gestures seem so empty. The title of Lisa Brice’s show at the Goodman Gallery, Joburg , Well Worn, denies the notion of the new, or renewal, and indeed it shows her returning to the gender themes she has mined before and a societal condition that appears inescapable. Her subjects are ‘well-worn’ too – they appear like fifties models in their cross-your-heart bras.

Nevertheless the work feels fresh and clever. This is mostly down to a sort of gimmick: striped fabric that serves as her canvas. It allows for a rewarding trompe l'oeil that seduces you into believing you are viewing her subjects through a set of blinds or filter.  This creates the impression that the female subjects – usually half-dressed women with ideal bodies – are obscured by the thick black lines that run uniformly horizontally and vertically through the artworks. These invasive lines carve up their bodies as much as they obscure them, further enhancing this voyeuristic gaze that the allusion to blinds evokes.

This visual device is more than a gimmick to refresh painting, or her practice; it is incredibly powerful because it acts as a screen that can be thought of as independent to the subjects or inextricably fused to them. As such the art begins and ends with the canvas – which of course, is always the case but is overstated in this context – despite the illusion of ‘separation’ it generates (as if we are looking through a small window into a larger world that exists beyond the frame.) In this way the striped canvas works at eroding and supporting the visual illusion inherent to painting. This all has ramifications for the ontological condition of painting but also, significantly for the gendered theme.

This striped ‘screen’ also speaks of the act of seeing via digitised lenses and screens. In this way these lined paintings suggest a number of ‘filters’ and layers of gazing and modes of consumption of female bodies. Significantly, most of these figures are looking at themselves, in mirrors, or are posing as if they are being watched or will be watched. The only time or space that they are freed from this is in this state of undressing or dressing up - before they have put on their clothing. An act that interestingly holds little interest because they are not posing - they are not active 'subjects', engaging or assessing their subjectivity.

As such even if they are alone  – they are never ‘alone.’ In this context the black lines are a metaphor for the noise, the visual and psychic noise that interrupts, shapes conceptions of the self but also prevents individuals from ever truly existing without the pervasive expectations of how to behave, look. Of course, these are not new issues or ideas, and certainly, they are not new to Brice, whose work since the Sex Kitten series in the early nineties has been concerned with how women perform for men and derive status and visibility socially, culturally through doing so.

What makes this series interesting or takes this discourse further is her interest in this state between being undressed and dressed, a space where the female body exists between the public and the private. Or is it? This intimate act demands our voyeuristic gaze yet doesn't pander to it. The subjects don't scrutinise themselves while dressing or undressing - they are absorbed in an act that doesn't require their gaze.

The visual filter also adds interest and develops the discourse.  Embedded in the image – as the base medium for a painting it cannot be removed or manipulated – the body must “fit’ in between but also suggests the manner in which clothing or dress in relation to the body cannot be detached. This draws attention to the inescapability of the societal pressures that are imposed on women – how the gaze is shaped and remains constant in private settings. In this way the filter makes clear that the space in between the private and the public does not exist - as it embodies the pervasive 'public' eye and the ramifications for women that it presents - particularly in this era where those boundaries have been eroded via social media.  Even when female subjects are alone, their guilty pleasure is to assess and scrutinise their bodies more closely and critically then would be done in public. Are they thus more free in clothing, dressed, in public? Or does clothing impose different sets of limits on the body?

As such while women are celebrated for “looking after themselves” this act of preservation is also one of self-destruction and a painful form of denial of the self, the body. This is articulated by depicting female subjects alone in bathrooms, in front of mirrors – the settings where they confront their bodies unadorned by clothing. Not that they appear to be tortured souls. In her use of the painterly trope of women gazing at themselves, she shows how even the act of scrutinising has been aestheticised and romanticised thus disallowing women to even claim this space for what it is and setting up the performance that must inevitably occur. In this age, Selfies enhance this performance of the self in private.

The striped canvas and the title of the exhibition obviously refers to clothing, which seems to be in contradiction to the images where the subjects are either naked or are posing in their underwear or are about to be dressed or undressed. This places them in such ambigious space; without their clothing on we cannot locate them in time, place or their social status. In this way they are both free, but also vulnerable to whatever we wish to impose on them.

This is where the paradoxical illusion of separation and inescapability comes into play again; the ‘garment’ denoted by the striped fabric is depicted at a remove and facilitates the gaze (at a remove) as well as embodying it as this screen through which the body is analysed and cannot exist independently from. Clothing, embodied in the stripe canvas, only partially obscures or conceals the body and also operates as this lens through which the body must ‘perform’.

Well worn, the title, refers not only to the female body as a stereotypical subject for painting, art, but the way in which women cannot avoid scrutinising their bodies over and over in the mirror and from this ‘remove’ as they imagine others observing them as they observe themselves – these two positions from which their existence is concretised and cannot be escaped. This art historical trope is like this embedded stripe in that it is internalised by women, ensuring they are always ‘posing’ for an anonymous sitter that never appears (or is depicted.) This celebration of the ideal female form through art and other media is thus turned into a twisted culture facilitating a never-ending performance that ‘erodes’ the subject, who gradually loses visibility as their body ages and no longer can be enjoyed by a ‘sitter’ or confronted in the mirror.

Brice never depicts this condition or the 'imperfect' subject. I’m not sure if this is a flaw or through this absence she directs us to it, her, this subject that cannot be depicted as the act of doing so ‘unwrites’ her agency, identity etcetera. None of the ‘bodies’ Brice depicts are ‘real’ – they are illustrative renditions; most probably copies of other images. We are thus spying through these blinds on products of the imagination or media projections. As such this act of viewing from a distance and being privy to these private moments is just a game, an empty set-up engineered to appease our desire to see what cannot be seen or in this context given the gendered baggage, watch a familiar scene, set up to obscure what is actually taking place – a body prepared or preparing (through dressing or undressing) to be seen and a subject who is always trapped by this ‘well worn’ dynamic.

Ultimately, therefore, the gimmick Brice adopts isn’t artificially adopted to generate attention. In the title and the repetitive subject-matter, you sense she wishes she could reach towards a new topic, a non-painterly one even. But instead of fighting to break free from the ‘well worn’ she digs in, she aestheticises the process of aetheticising she wishes to challenge as a way of harnessing the multiple gazes that dissect the female subject, including the subjects who are captivated and imprisoned by their  fixation with their bodies and the viewers, who are positioned as voyeurs and implicated in the imprisonment of the subjects due to their fixation with her and her body.

Brice's adept execution and manipulation of her medium also contributes to the show’s strength and subject-matter. You find yourself standing right up against the canvas to scrutinise what is seemingly obscured, while standing back to marvel at this visual device she has adopted. In some works the bodies of her subjects are distorted by this screen and partially melt into abstract shapes. This occurs not because they are placed at a distance but are too close. This is a sophisticated show despite the well-worn themes.
Posted by Mary Corrigall at 1:05 AM