Has Brett Murray censored himself? 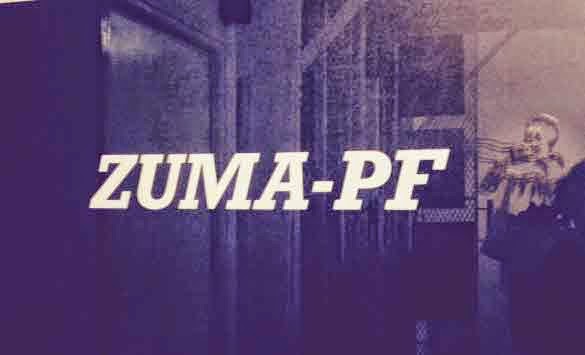 During the backlash Brett Murray’s derisive portrait of president Jacob Zuma, the infamous Spear, provoked many wondered whether Murray would continue producing art or art with a political bent. Would he presume to depict the president in an artwork again? This question is cheekily referred to in the title of his first solo exhibition since The Spear debacle titled Again, Again, which opened at the Goodman Gallery in Cape Town, on Saturday. The notion of repetition permeates this show; not only in reference to the pressing questions about Murray’s persistent pursuit of political content, but in a form of leadership or twisting of ideological values that is replayed over and over. This evokes how one corrupt state is replaced by another, or even how one mirrors another, such as in a scripto-visual work that presents the phrase “Zuma-PF”.

The art on the exhibition made clear that Murray will remain active and will persist in satirising and critiquing the president and the political status quo. There was also a bitter if not angry edge to the show, perhaps born from the manner in which the government may have bullied him and the gallery representing his work in 2012 when The Spear caused a national furore. His impudent and wry manner has not been extinguished but there were no artworks on this new show that directly depicted the president, barring one hidden in the loo. In this way Again, Again, sees Murray fighting but he keeps his gloves on.

Murray’s ire and persistent sense of humour in relation to The Spear debacle is best encapsulated in a very cheeky but defiant work titled Call and Response. This bold scripto-visual work presents two statements, which are juxtaposed. The one reads: “I must not make political art,” which is duplicated to fill the expanse of a block, while the other bears a contradictory phrase: “You are a corrupt fuck.” Okey-dokey, hashtag awkward. It’s as if Murray has decided to go for the jugular in such a straight-line that his sentiments could not be misinterpreted.

As if in anticipation that the Call and Response series will prove popular, due to the defiant and subversive sentiment underpinning it, it is rendered in different mediums and materials, giving buyers at both the top and bottom ends of the market a chance to purchase it. Is he cashing in on his reputation? The price of his work has not become inflated, according to Tony East, the manager of the Goodman Gallery Cape Town.
“I think he wants to keep his art accessible,” he said.

It is the Call and Response etching rendered on the hard Somerset black material that has the most impact as it resembles both a black board or a grave headstone. This evokes the recurring sequence from The Simpson’s where Bart is depicted scrawling statements as punishment on a chalkboard – it was often the vehicle for the American creators of the series to insert political commentary. The allusion to a gravestone might refer to the risk or negative outcome from making political art, or the manner in which censorship and the punishment of artists, “kills” art. This artwork directly references the president’s response to The Spear without actually doing so. In this way Murray exploits the debacle, which at the time must have been hard for the artist weather.

Aside from Zuma’s office denouncing the work, the ruling party took Murray to court and organised a rally outside the Goodman Gallery were the work was on display. The government even mobilised the Film and Publications Board (FPB), who declared that it would be illegal for the work to be viewed by anyone under the age of 16. This ruling was subsequently overturned and it was found the FPB had overstepped their authority, nevertheless, in almost every way possible the government put pressure on the artist and the gallery representing him to remove his artwork from public view, creating the impression that there was no place for his brand of satire. During the debacle, Murray’s family were subject to death threats. The ruling party and the president’s office argued that it was not the political content of the artwork, which depicted Zuma in a Lenin-esque pose, which caused offence but the undignified manner in which his likeness was represented – Zuma’s penis was hanging out his trousers.

In this new show, Murray has not presented any direct depictions of Zuma. There is only one work, Joker in the Pack, that features his first name and it is displayed quite discreetly in the toilet and is therefore “not part of the exhibition. It’s loo art,” according to East. The joker card motif is also present in the work Mr Charmer (He He He) where Murray references the president’s predilection for laughter in the face of criticism – as was the case during the recent State of the Nation Address.

You could view Murray’s choice not to represent the president and placing works with direct references to him in out of the way places – the Zuma-pf work is shown in an adjoining room, which is usually only open to select people - as acts of self-censorship. Ironically, however, because the ruling party and the president responded so aggressively to The Spear, Murray need no longer make work directly representing Zuma, as most people might assume now that any of the artist’s visual-scripto works presenting statements, sculptures or paintings will invariably refer to the president whether that was the artist’s intention or not. As a result a sculpture dubbed Liar, Liar, depicting a short figure with a long nose that reads like a phallic symbol, will be associated with Zuma.

Once again Murray declined to give interviews to the press. No doubt he wishes to leave it up to viewers to make their own minds up, which is a brave move, given that when he did so before, he became the target of abuse and slurs.

Edited versions of this text were first published in the Weekend Argus and Sunday Independent on April 19, 2015. The exhibition will show at the Goodman Gallery Cape Town until May 16
Posted by Mary Corrigall at 5:23 AM