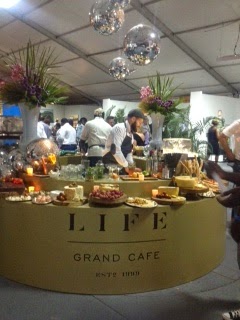 It could be a Roman banquet. Huge rounds of exotic cheeses are arranged on wooden boards among breads of different shapes and sizes, grapes, patés, olives, macarons and strawberries. Among the spread are shiny disco balls, and flower arrangements spring from the top of elongated vases.
A discreet rope surrounds this epicurean fantasy. A sign hangs near a gap indicating that this is only accessible to Sanlam's VIP guests, some of whom are seated at small tables dotted along the almost invisible perimeter as if they are ensconced in some exclusive eatery in Paris. In fact they are sitting in a parking lot at the rooftop of the Hyde Park shopping mall in Joburg.

Of course, it doesn't look anything like a parking lot - that would interfere with the experience of the Sanlam Handmade Contemporary Fair, which is a few steps above a pedestrian rooftop market.
This is a deluxe, designer one, which is elevated by the temporary setting - a gargantuan tent with makeshift floors, walls, lights - and the provenance and style of the merchandise that is on offer.
There are no cheap Chinese imports, bargain sunglasses, designer knock-offs, wooden African curio items or second-hand books. As the slightly (new) pretentious title of this annual event implies the goods for sale are "contemporary and handmade", or at least aspire to be.

Contemporary is a term that it is bandied about far too generously in the art world, and by Art Logic, the organisers, who incidentally also run the Joburg Art Fair, believing that this term has cultural currency.
In the context of this fair and probably the art one too, it's a euphemism for fashionable.
The Sanlam Handmade Contemporary Fair is hipster heaven; it is brimming with leather bags and cases that would look fabulous tied to the back of a bicycle - preferred hipster transport - and there is a frightening abundance of triangle motifs that come in the form of jewellery, prints for throws, blankets and pillows and there is even a coffee table at a furniture stand with triangle cut-outs.
Never before has the triangle enjoyed so much attention.
An outsider, unaccustomed to hipster culture or the design world's vacuous aggregation of high modernist abstraction into its vocabulary, might take this obsession with this symbol to be the not-so-secret emblem of some new cult. 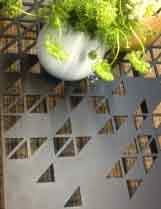 In some regards that is precisely what it is, given that an abundance of triangle motifs tend to predominate in contexts where this whole handmade, artisanal "local is better" malarkey flourishes, such as in urban hipster hangouts in these pop-up markets in Braamfontein, and Maboneng, or in newly gentrified hipster pockets which are growing tentacles not only in the inner city but in the suburbs too, usually near coffee shops where you sit at communal wooden tables.
This is a culture that is more or less a counterculture, one in response to the soullessness, exploitation and banality of mass production and large chains. A cultural manifestation of post-industrialisation that presents consumers with the option to engage in "ethical consumption" and thus challenge the status quo that we are seemingly locked into.
The Sanlam Handmade Contemporary might boast the symbols and products that we associate with this movement but it doesn't squarely conform to it. For starters its location jars. You have to walk through a mall to get to it.

And although the temporary architecture, which is clean, pleasing and designery - lots of wood panels and fashionable fonts everywhere - immediately announcing you have entered another world, it remains tethered to the mall. Ultimately, and ironically, this draws attention to the major flaw in hipster/artisanal/green culture itself, which not only remains and relies on consumerism to announce itself, but in so doing perpetuates a culture where identity and status are largely defined by what you buy or where you shop.
"Ethical shopping" is the new elitism, which sort of undercuts its moralistic thrust. The affluent Hyde Park corner setting drives this home as do the pricey goods.
Even browsing at this fair comes with a price tag - you have to pay an entrance fee unless you are a VIP or have a media pass. Then within the fair itself different levels of status are secured via these VIP areas where waiters with small trays weave among the guests.
In this way Art Logic isn't only setting up new contexts to sell commodities, but is selling a unique shopping experience.

Joburgers are hungry for this commodity because it is an intangible one, the city is replete with malls with identical shops and shopping here isn't a necessity but rather a pastime.
The new hipster markets in Braamfontein and Maboneng have provided an alternative, and in this fair Art Logic offers a more affluent or sophisticated version, with furniture, crockery, leather goods as well as the food and wine complement. It is like a fancy neighbourhood goods market for an older population group.
All of these realities make the fair sound like an abominable self-consciously middle-class pursuit riddled with ethical dilemmas, which it is.

But somehow this doesn't interfere with one's enjoyment of it. It is hard to resist a frisson of delight as you move through the stands, marvelling at all the fantastic homemade South African products. That South Africans can be inventive is a novelty that has not quite worn off yet.
South African designers are making all kinds of brilliant desirable things from plates, linen, face-creams, silk scarves with prints created by artists, to tables, and lamps, shoes, hats and necklaces. This fair titillates anyone interested in décor, fashion or food.
I left with a Pichiluk necklace, a triangle of French goat's cheese (from France - so much for the carbon footprint) from Fromage de France, and an expensive room spray by Malee, a company that has crafted three unique African scents. Your consumption of products at this fair tends to be guided by how much wine you consume.

Almost everyone I know complained how they spent a fortune at the last one because they were tipsy.
There were fewer wine stands this year compared with previous ones, presumably this intended to shift the focus from it being a wine and food event and rather a design-oriented one. They were also probably tired of having to herd the last drunk stragglers at the end of each evening.
The cuisine element remains a feature. Mostly stands run by restaurants and caterers offer sophisticated street food that is a little posher than you would expect to get at a suburban good's fair. We tucked into wild boar tortillas from Coobs and the most magnificent black squid ink paella by Tutto Food Co.
Interestingly, about every stand I visited promoted their online facilities. So perhaps this kind of market is a platform for the virtual shopping world to temporarily make itself "real".

The increase in online shopping has ironically contributed to the excitement and interest in a fair like this? it presents a kind of hyper-consumerist encounter with its temporariness heightening the urgency to shop, although you know where to go and buy the goods online or at other shops.
There is also the social aspect. Art Logic has cunningly turned the opening nights of its events into social ones, ensuring that people patronise them so as to be part of the scene.
In this way you are not only able to pursue quasi-ethical shopping, which will contribute toward job creation in the country, but can also share the experience with friends and acquaintances with similar values. This is incredible, given it all transpires in an empty-parking lot. Like the travelling circuses of yesteryear, part of the attraction of the fair is that it is fleeting and offers a glimpse into a world that doesn't quite exist. In this case it is not one where women and men perform physical feats but where everything is "contemporary". - first published in The Sunday Independent, November 16, 2014.
Posted by Mary Corrigall at 1:27 AM