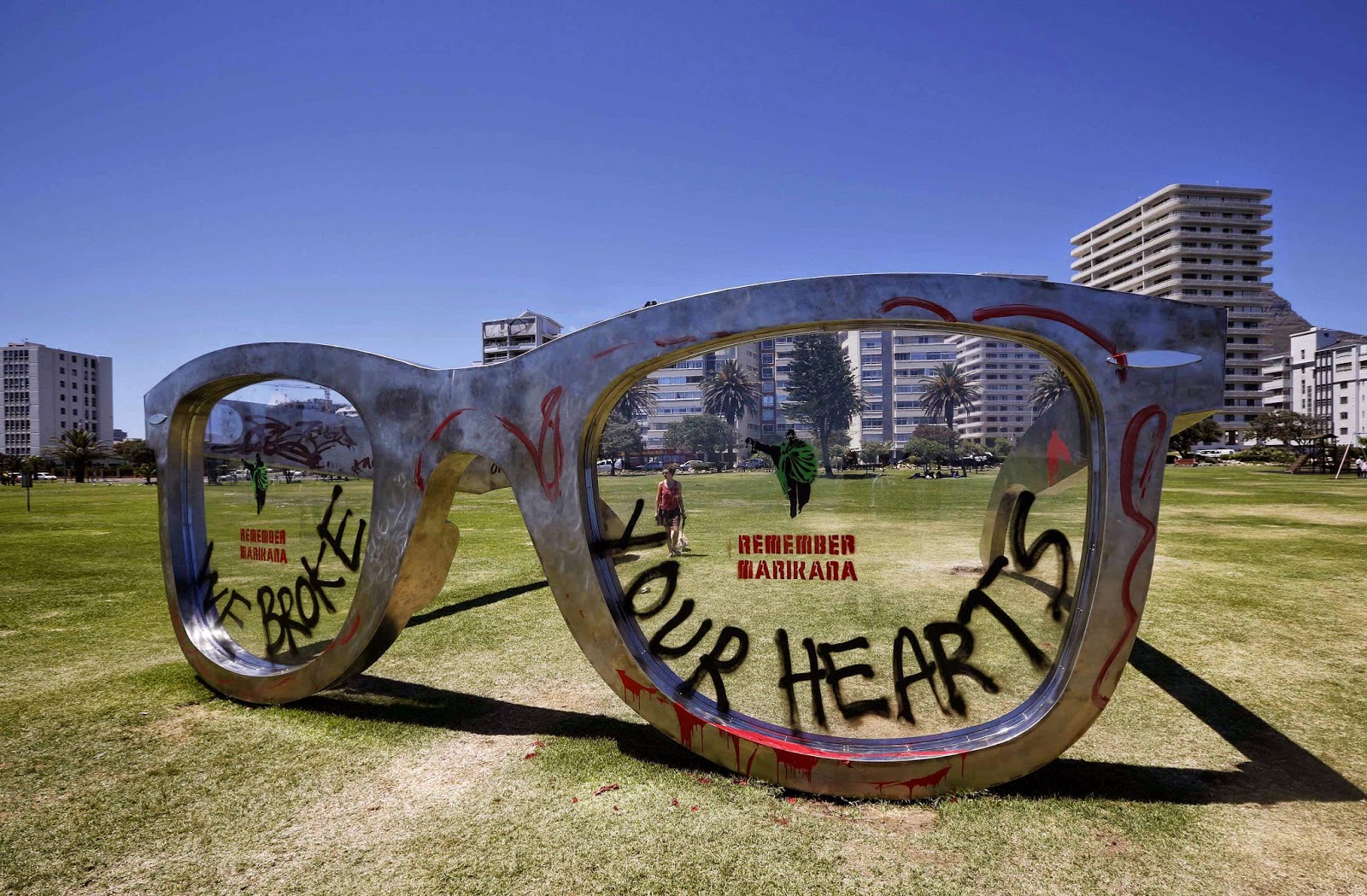 Ray-Ban Wayfarers were coveted in the ’80s. Worn by Tom Cruise in Risky Business and Matthew Broderick in Ferris Bueller’s Day Off – both films that charted the shenanigans of young men who break free from parental constraints for a couple of crazy days, running a brothel from home and sinking an expensive sports car in a river – these sunglasses were the ultimate expression of coolness and rebellion.
They embodied that moment when someone is willing to contravene societal pressures, rules and responsibilities and say “fuck it, fuck everything”.

This characteristic or association appeared to remain intact as a new generation, gripped by an ’80s revival took up this symbol, adopting it as a signature item that any hipster with street cred should have in their homemade organic leather bag or hovering above a bushy beard. Those who lived through the Wayfarer’s rise in the ’80s were more than keen to sport them once again in an effort to reclaim their youth and hide those creeping crow’s feet. An English lecturer I knew used a pair of the glasses to seduce all the young men in his class. He never took them off, even at night and probably in bed too. The glasses were his source of seduction and concealed his age and the increasing cynicism which marked his gaze.

In the last couple of weeks since Michael Elion’s giant pair of Wayfarers took up position in Cape Town’s idyllic promenade in Sea Point as a public artwork dubbed Perceiving Freedom, the classic pair of sunnies have not only lost their street cred, but some of the more outspoken detractors of this contentious public artwork, such as the Berlin-based artist Candice Breitz, have called on South Africans to abandon their Ray-Bans in protest, forcing locals to weigh up their outrage against this public artwork with their vanity.
Aside from the artwork, Elion has made many mistakes, including directing misogynist barbs towards Breitz and laying a charge of incitement of violence against Breitz, Stephen Hobbs and Hermann Niebuhr. Perhaps his worst error was linking his giant glasses to Mandela and a political notion of “freedom” and rebellion within the context of South Africa’s apartheid past.

From all accounts it appears  this link was only made when the giant glasses were to be installed on the promenade. According to Farzanah Badsha, a member of the selection committee for art54 (the agency tasked with implementing temporary public art in the city), the artwork they had approved was a pair of giant sunglasses that would be installed in Camps Bay with a network of sprinklers that would create rainbows on the beach. As Badsha confesses, the change of location had real implications. She claims Elion took advantage of the change of location and the seeming ineptitude of the City’s muddled processes around the commissioning and implementation of public art and added a political layer to a work that had up until that point  been viewed by the selection committee as a “fun and popular work” that would be interactive and aimed at children.

As the new location now faced Robben Island, Elion began to embroil a narrative linked to Mandela, which was inspired by a famous photograph of Madiba posing in a pair of sunglasses and leaning on a spade. The picture was taken during a visit by journalists in 1977.
The image was not a reflection of the actual circumstances for Madiba on the Island – it was staged for the journalists. Mandela typically worked on a lime quarry and not in a garden.
Ironically, this staging would detract from Madiba’s standing as a professional and a political leader and cast him as a gardener |– a lowly status that the apartheid state designated for black people. In this way, this image and by proxy this portrait of Madiba in these sunglasses, which are apparently not Ray-Bans or Wayfarers, obfuscated not only the truth about the conditions on Robben Island, but also attempted to belittle the status of this great leader.

In this context the sunglasses could only be seen to operate as a symbol of obfuscation of the truth and a means of denying the agency of the subject in the image to assert his “truth”. Presumably, Elion was keen to link his giant sunglasses to Madiba in an effort to secure funding and sponsorship from Ray-Ban.
In the absence of a budget for public art, it seems the works that would be implemented are those that had secured funding from elsewhere. Who wouldn’t want to sponsor an artwork that pays tribute to Mandela?
The connection, which the photograph appeared to substantiate would also allow Elion to elevate this vacuous work and transform it from a work for children to something with serious political intent, something he seems ill-equipped to do. Interestingly, he kept the lenses of his giant glasses clear, so as to counter the notion of obsfucation that they engender and enhance this idea of lenses colouring perceptions.

Ray-Ban, the City of Cape Town, Art54 (who have thrown Elion under the bus) and even the Mandela Foundation itself, seem to have paid little attention to how Elion was evoking Madiba and his legacy.
Not that this is unusual; the Nelson Mandela statue in the eponymous square adjacent to Sandton City is perhaps testament to not only the abominable art that is made in Mandela’s name, but also how his legacy is exploited for commercial ends and, in this setting, has become associated with consumerism. I suppose this is what happens to the legacies of all great figures – their likeness will eventually adorn coffee mugs.
What is interesting about Elion’s artwork is the way in which a middle-class sense of freedom as the Ray-Ban Wayfarers evoke is collapsed with political freedom during a repressive era.

In those cult ’80s movies, which no doubt increased the sales of Ray-Bans substantially, the sense of freedom that is evoked is of the sort that only the privileged might enjoy – like renting out your parents double-storey home so that your friends can break their virginity with prostitutes and destroy an expensive sports car.
There is also the fact that RayBans are not cheap, hence they are the preserve of the moneyed classes. And while Mandela was undeniably middle class, this status had been completely denied to him in the image with the sunglasses and during his incarceration. In other words, it is an image where freedom has been suppressed..

Elion’s crass exploitation of history to secure sponsorship isn’t just indicative of an artist with little artistic integrity or conceptual nous but also of the attitudes in the corporate arena, where companies try to align itself with political works to leverage credibility. But this phenomenon is not limited to public art or corporate sponsorship programmes, but to our broader political landscape, where leaders exploit their struggle credentials to remain in power.

This subversion of political ideals for self-serving motives fittingly marked the final – or will it be? – act in this public art drama, the act of vandalism committed by the group dubbed the Tokolos-Stencils. They also evoke the notion of freedom on their tumblr site, implying that it guides their acts of vandalism. Though graffiti has lost its subversive character and is used by property developers to gentrify suburbs, they believe it play a significant role in fighting for social justice. On their site, they recount how one of their members spray-painted the "Remember Marikana" slogan around a shanty town near where the tragedy occurred, as if the community needed reminding, and in English - the language of the "master" they claim to be their enemy. They arrogantly or patronisingly presume that this act worked at unifying the community.  This slogan might have had more impact had they placed it outside Nathi Mthethwa's (former Minister of Safety and Security) home or Riah Phiyega’s office, or perhaps that might have disrupted they objective to challenge "white supremacy."

Just as Elion exploited Madiba's legacy, so too did Tokolos-Stencil, take advantage of the attention his contentious public artwork generated. In an interview with the ConMag they express annoyance that their seemingly "subversive" graffiti or interventions had gone unnoticed by the press. So, it appeared as if their act was designed to draw attention to themselves.

Despite the group make observations about the poor conceptual content of Elion’s work, their own, was a seemingly empty gesture too (they did not engage with the flaws of the work) which also involved riding on the coat tails of political issues in an effort to shore up the “content” of their work. - first published in The Sunday Independent, 23 November 2014.

Posted by Mary Corrigall at 2:13 AM

I was puzzled by what the Tokolos stencils slogan meant-

We broke your hearts