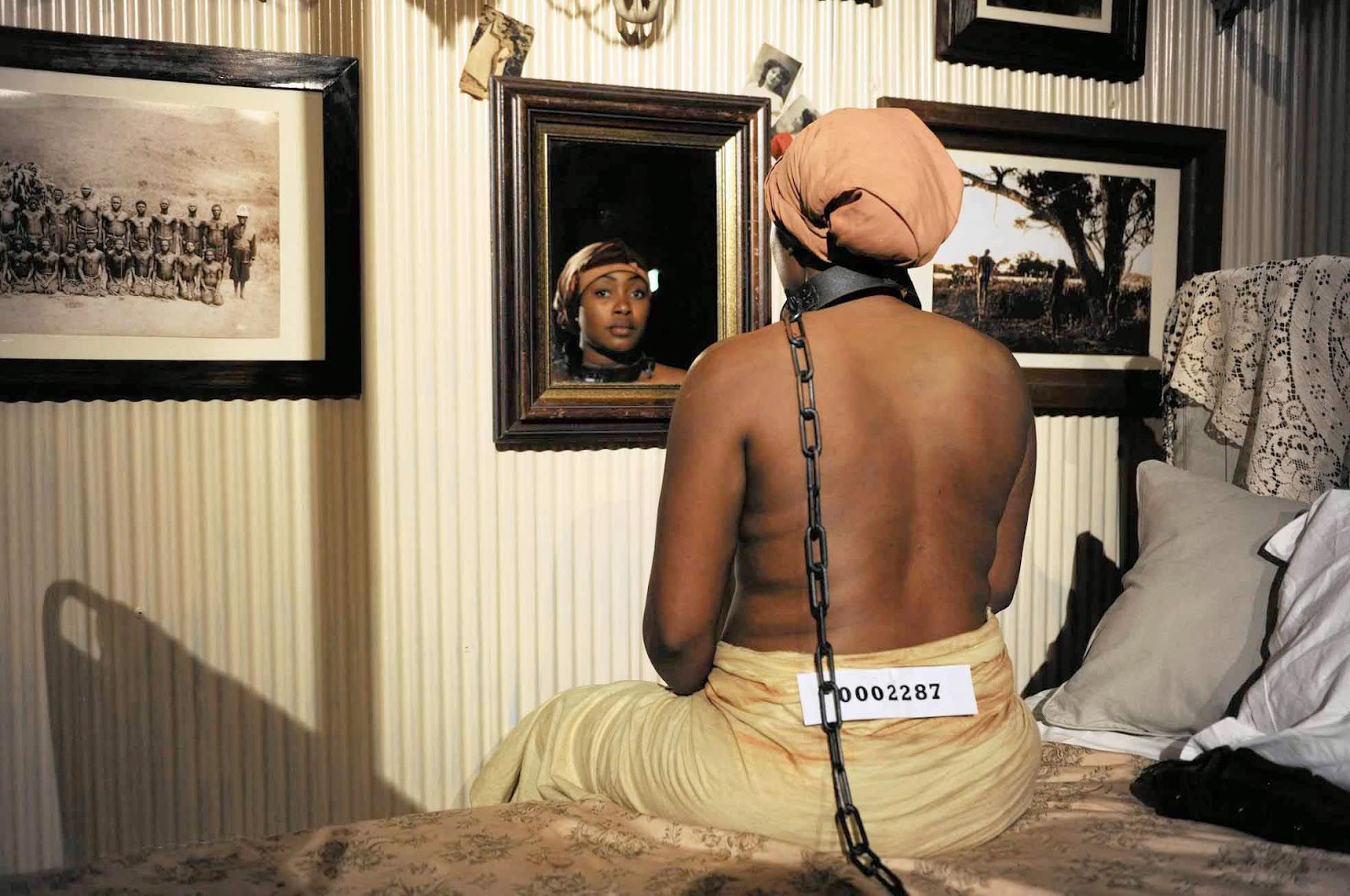 My Facebook newsfeed is still aflutter with commentary about Exhibit B. Perhaps this isn’t surprising given the profile of most of my “Friends” (I haven’t met half of them in the real world), who are mostly cultural producers or commentators such as myself. One of whom is Brett Bailey, the creator of this contentious production that catalogues, via chilling tableaux vivants, some of the most shocking crimes visited upon black Africans during the colonial era and up until the present day. This has afforded me a bird’s eye view into his responses to the protest against the work, and the subsequent cancellation of its run at the Barbican Centre, which has now, via statement from a group of theatre/festival directors, been considered tantamount to censorship.

Bailey’s reactions in this public realm have been interesting and telling (and I will come to those later), as have those by others in the multiracial virtual arts community to which I belong.
Perhaps this virtual world in which I check into daily (wish it wasn’t so) is not a microcosm of our society from which I can authentically arrive at conclusions about our society, but what it has allowed me to conclude with certainty is that it is in these virtual spaces  the meaning of an artworkis negotiated and tested, allowing a form of crude art criticism to flourish. There is no single person advancing one or two (I often have contradicting responses) arguments regarding an artwork, and opinions aren’t always substantiated – they are often rehashed versions of more formal responses, or clumsy knee-jerk reactions that have not been thought through and are shaped by an awareness that ultimately the content will reflect more on the public persona of the “author” than on the artwork itself.

All of these conditions, plus the fact that the majority of people that have been passing comment on Exhibit B – which is a slightly reworked version of Exhibit A, which showed at the National Arts Festival in Grahamstown in 2012 – haven’t seen the work, possibly should invalidate their position as pseudo critics. At best perhaps they should be described as dressing-gown critics – they don’t have to leave their bedrooms to be part of a dialogue about what takes place outside of it.
Bailey is fully cognisant of this fact and largely has exploited it by maintaining that the social, moral and artistic value of Exhibit B lies in its experiential impact.

Unlike Brett Murray’s The Spear, which similarly caused protest and led to the subsequent “censorship” of the work (in the real world and then the virtual), Bailey’s work could only be truly appreciated in person. I would argue that this is the case for any artwork, including paintings, for it is not only “live”work that is centred on the act of transformation but all art. Even some of the most blunt, scripto-visual art such as Ed Young’s Don’t be a Dick at the Joburg Art Fair this year, was best appreciated in person, taking into consideration the context of a hyper commercialised art extravaganza that plays out in a convention centre, and knowledge of the works he had made for the fair in previous years.

Virtual social media vehicles have loosened criticism from its journalistic roots, unburdening it of truth and ethics. However, perhaps the main consequence isn’t for criticism or journalism but art, which is now consumed by proxy – that is, via the internet and others. In this way the digital, virtual age hasn’t only given rise to the dressing-gown critic but the dressing-gown viewer.

There can come a point when the dressing-gown critic can become so enraged that they are prompted to rip off their sleepwear and charge out their bedrooms. Bailey’s Exhibit B was closed down by interventions that occurred in the real world – protesters made it impossible for the actors or audiences to enter the theatre.
However, this real world outcome only occurred because of the work’s virtual consumption, which largely seemed to rest on one image that has subsequently been linked to most articles reporting on the protest and the closure of the production. The image is, of course, the one pictured here too; a tableau vivant of a half-naked black woman chained to a bed. In this way Bailey’s Exhibit B has been distilled via the web and media to this single image – making it the veritable final product.

If Bailey had been able to anticipate this when he first conceived the work, would Exhibit B have been a different product tailored for the society that we have become rather than theatre-going one of yesteryear? I would like to think it would have been. For perhaps his greatest error in conceiving of this restaging of a 19th century human exhibition was in placing it on an outdated stage.
YouTube has become the modern-day circus, where people not only perform great (and ordinary acts) but where “otherness” is|displayed, absorbed into the mainstream and celebrated. If the work had first been launched on YouTube it is likely that black South Africans might have protested against the work in the beginning and not belatedly, for mostonly rejected it when the campaign to stop it appeared on the internet/Facebook. Its actual live staging would have been something consumed with the virtual one in mind – like attending a Die Antwoord concert after watching their YouTube performances.
Bailey might not have entertained this route because the moment of transformation that Exhibit B is supposed to elicit occurs by occupying the intimate space with a performer parading as a victim of an atrocity. However, the notion of what is live in the digital age has shifted considerably – as has the idea of art as transformative. The responses, both real and virtual, to Exhibit B imply that the process has been reversed: art is transformed by viewers.

Facebook is also a “stage”, which allows artists to more actively participate in the reception of their work (or to defend it), something which traditional media and criticism was unable to really accommodate other than on a letters page, which doesn’t allow for interaction, arguments and counter-arguments.
It is also a platform where the artist’s public persona comes to shape our perception of his or her work. In other words, a traditional critic’s research now extends beyond simply standing in front of a work, but in measuring and balancing the virtual responses to it, which shape its meaning and the artist’s statements in these realms. Bailey’s responses to the public outcry and protest around his work on Facebook shifted my reading of Exhibit B, which I was fortunate to have experienced in Edinburgh, where it was staged in a university library – a setting that added other layers of meaning to the work.

I had always been bothered by the way in which he perpetuated the stereotype of black Africans as victims, but enjoyed the irony inherent in what I perceived to be a tacit acknowledgement that the work confronted white viewers with their pleasure and revulsion of this stereotype, and that the sense of “shame” it induced was reliant on this contradictory interplay. In this way the work’s strength was to “sell” shame, which paradoxically delivered some kind of pleasure due to the release it might offer, though in the context of this work it was rooted in such a morally corrupt language that viewers couldn’t find a release. There is no release.

Unfortunately, in Bailey’s responses on Facebook and via other more traditional media platforms (the press statement that was published in various newspapers including The Sunday Independent), he never conceded that the work was purposefully offensive and done with the express idea of confronting viewers not only with crimes from the past, but a modern-day preoccupation with a release of shame and how corrupt a path to that end might be.

He never conceded either that his identity as a white South African added another level of irony to this twisted work, as it would always be linked to his own desire to be free of shame, which could only be reenacted via this corrupted visual rhetoric. He never conceded that he had willingly walked into a cul de sac of history’s making and that, in so doing, he might have believed it would liberate him from history. Nor did he admit that the protests and closure of the show had ironically allowed him to achieve this by claiming the position of a victim, who had been censored. The protesters had ironically given him this status on a silver platter. Maybe none of this has occurred to him or he has been unwilling to share it on Facebook, that weird stage where theatre and masquerade has found new meaning. - first published in The Sunday Independent, October 05, 2014.
Posted by Mary Corrigall at 3:50 AM