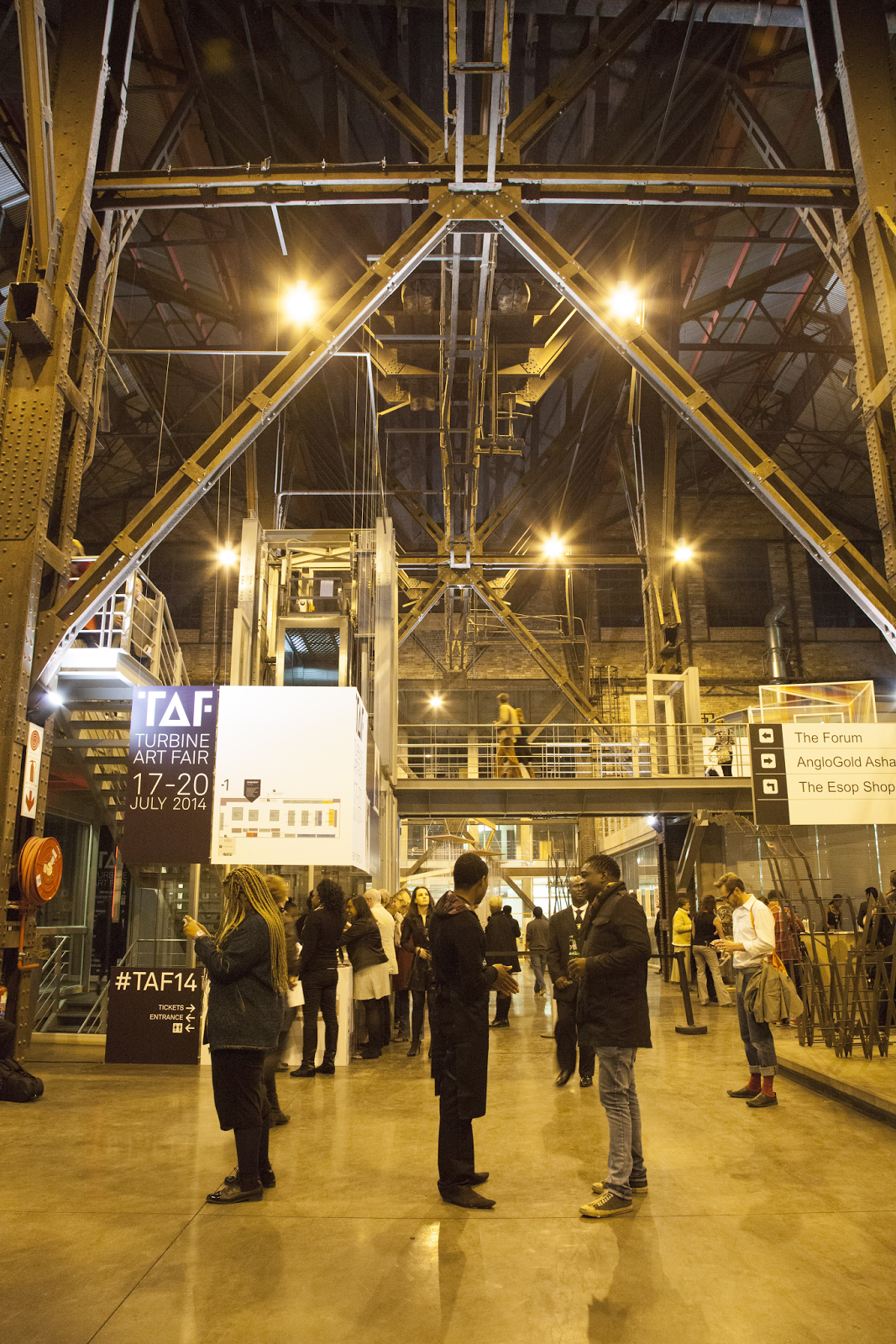 ARE ART fairs worth writing about? It's a nagging thought that, for some reason, I can't shake as I stroll through the aisles of the Turbine Art Fair (TAF) on its preview evening. I have a glass of decent red wine in my hand, am surrounded by familiar faces - gallery owners, other critics, artists, buyers - and every stand I pass has lots of works dotted on the makeshift walls. I see a few works I wouldn't mind snapping up: a Mary Wafer and a Stephen Hobbs at the David Krut stand and an offbeat photograph by Michael Cheesman, a young graduate, that is on display at the Assemblage stand. There are some Cape Town stands - the Lovell Gallery, Worldart and the Kalk Bay Modern, which offer a view into that scene. There is live jazz playing in the background and, as always, it is pleasing to be inside this gentrified Newtown building, particularly its basement, where its historical and industrial roots are exposed. This all makes the TAF a chilled, quintessentially Joburg affair and a great alternative to the Joburg Art Fair. Yet, I feel uninspired.

This may have something to do with the event I attended the previous evening, the Absa L'Atelier award ceremony, which similarly offered up a smorgasboard of art to peruse. These two events both appear to cater for young artists or the "undiscovered" (read, those who have yet to be signed up to any of the major galleries) and offer relatively cheap work to buy, though I would argue that some of the work at Absa L'Atelier is overpriced. Both platforms therefore appear to offer a space for those excluded from the exclusive art world - the Absa L'Atelier award is based on merit (so they say, though I would argue it depends on what the judges perceive as merit) and showing work at TAF is within the grasp of any gallery and young artist. The basement level encompasses stands for university art departments and it is where most of Assemblage's (a young artist collective) Fresh Produce exhibition was located.

Aside from the fact that this fair (and the others) have a natural bias towards conventional artworks that can be hung - opposed to videoworks, sculptures, installations or performance art - this is a good development and very necessary, particularly given that the two major galleries, The Goodman and Stevenson, have come to determine who is "in or out". Given that both of these galleries and other notable trend-setting spaces such as Brundyn +, Whatiftheworld, and Blank Projects did not participate in TAF, this fair gives us a purview of our art terrain without their contribution. And it is, unfortunately, not such a pretty sight though this might have nothing to do with their absence.

Even the work of proven artists is a little average at this fair (and others) - the Kentridges at the Art Vault stand are inconsequential unless you just want to own a Kentridge, and there are a few Sam Nhlengethwa drawings at the Bag Factory stand I wish I had never seen. Is it due to the affordability factor at TAF, where most works are under the R20 000 mark? For this to be possible the scale of many of the works at the fair is limited. It is hard to appreciate a Diane Victor work that is not even 20cm in length.

Nathanial Stern, the featured artist at TAF, scaled down the dimensions of his Rippling Images series in an effort to make them more attractive to buyers. This may have come at the cost of the integrity of the work itself. His decompression impressionism, which involves scanning, directly digitizing a live experience, is not as successfully realised in this new series in comparison with his previous application of this process in works such as the Giverny of the Midwest triptych, where the sheer scale of work allowed viewers to vicariously study the details of his underwater adventures and find themselves immersed in this performative work.
Despite the poetry and romance of his technodriven quasi impressionistic mode, his large scale works struggled to find buyers in a gallery setting, according to Stern. It might be likely that he would have chosen to scale down the dimensions of his work regardless of this fair, but this hyper-commercialised setting certainly enhances artists' awareness of the marketability of their products. This can be a good thing.
Gaining notoriety or fetching a high price for an artwork seems, based on previous fairs, not to have anything to do with the scale of an artwork but rather its content, or an overstated aesthetic or physical presence that cannot be ignored.

Art has to scream loudly in a setting where there is so much of it. Two artists at the Res Gallery stand offer the ideal ogle-factor. Benjamin Skinner's naughty nurse series, which riffs on burlesque-cum-pinup culture via a sort of Giegeresque aesthetic, proves a drawcard - some of the images are also large enough to hold your gaze, though naked nurses dissecting each other might also be the attraction.

Andrew Robertson, who has previously specialised in political satire, offers his take on Goya's The Shootings of May Third 1808, which is adapted to comment on the Marikana massacre. A clear likeness to Nathi Mthethwa, the former minister of Safety and Security, appears in another reproduction. This kind of obtuse political commentary translated via a classical historical figurative or painterly lens proved to be a winning formula for Ayanda Mabulu at last year's JAF, though its initial censorship by the organisers may have fuelled interest in it. However, this kind of mode causes knee jerk reactions, as has been the case with Yuill Damaso's reworking of Rembrandt's Night Watch, and even to some extent Brett Murray's controversial The Spear work.

At art fairs it is, ironically, difficult to assess the value of the art. Individuality and nuance is muted in contexts where art is paraded en masse. There is no room for the idiosyncratic narratives, either around process or ideas, to really be heard or to even seem relevant, unless you are already aware of them.
In this way this fair and the others tend not to be spaces to look at art, or write about it, but to buy art. This is what fairs set out to do, though the organisers most often couch the commodification of art in rhetoric centred on the "accessibility" of art, claiming that if you throw wine, good food and a pleasing setting into the equation, art becomes "easier" to access.

However, what I am increasingly finding is that while these lifestyle elements do make for a pleasing day or evening out, they also hinder "access" to the art, because the element that makes art, somehow becomes so secondary, or only a certain type of loud statement becomes relevant or noticeable in these contexts.
Fair organisers, particularly those at the JAF, are trying to pursue a more hybridised model, offering special projects or featured artist stands, and performance art pieces that challenge these object-centred extravaganzas, which are successful in varying degrees at countering this visual assault.
At TAF, a sound installation by Jenna Burchell called Homing offers to aurally transport visitors to different cities, and works at providing some relief. But it is a temporary reprieve because it is so one-dimensional. The only work that makes sense is a scripto-visual print that presents the phrase: Is Geld sexier as Seks? - is money sexier than sex?  - published in The Sunday Independent, July 27, 2014.
Posted by Mary Corrigall at 3:54 AM