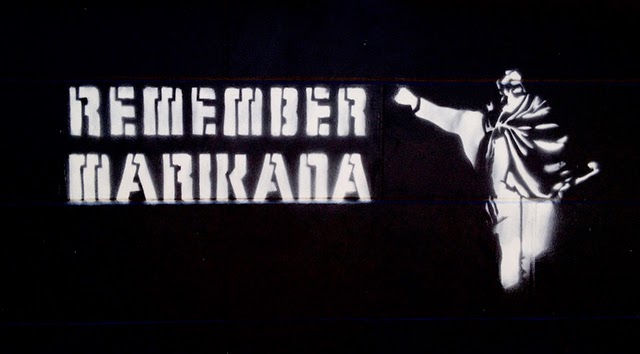 The most uncomfortable scene in Kaganof's film is not the one where we see the massacre of miners by the police, but the juxtaposition of a homeless man showing this small space in a derelict building where he sleeps and Willem Boshoff talking about a small booth he set up a Basel Art Fair in 2009 that he lived in for the duration.  Aside from the obvious difference between being privileged enough to choose to sleep in a confined space and being forced to out of necessity, which adds to this discourse on spatial politics and class/race that Kaganof drives superficially, it exposes the unbridgeable gap between the seen and unseen. Boschoff can chose to experience sleeping in a small space but he can't ever really grasp (read see) what it might be like to not have that choice, even if he plays it out in a context or territory like an art fair where such complicated and obvious politics around 'space' abound. In other words if he enacts a battle within a territory that is within in his realm of existence, he still cannot understand the homeless man's predicament.    Not that this is the motivation for this performance - Kaganof is an irrepressible  visual cannabilist; he overwrites existing material in his visual deejaying. This is why he warns us not to trust visuals. Boshoff doesn't come across as some kind of pretentious art twat bent on voyeurism, in fact his druid walks appear to be driven by a genuine desire to connect with the world around him and gain knowledge about it. Despite these authentic gestures, he somehow still comes off looking like a fraud during his wanderings, with a group of people in tow who want to understand him rather than what he can't 'see'.

Kaganof reduces the Marikana massacre to one that is tied to the politics of space and land ownership. As with Wafer’s exhibition, Kaganof doesn’t seek to pin anything down; if anything, through his documentary deejaying he attempts to open up different avenues through which to come to grips with how we understand and process not only this event, but a country where such extreme poverty has become its Achilles heel. Ultimately, as with Wafer’s work, he doesn’t deliver the viewer at a place where you can make sense of the Marikana massacre, but leaves you with the impression that you haven’t even begun to see (in depictions of it) what is not there. - an edited version of this article was first published in The Star, July 8.
Posted by Mary Corrigall at 4:39 AM