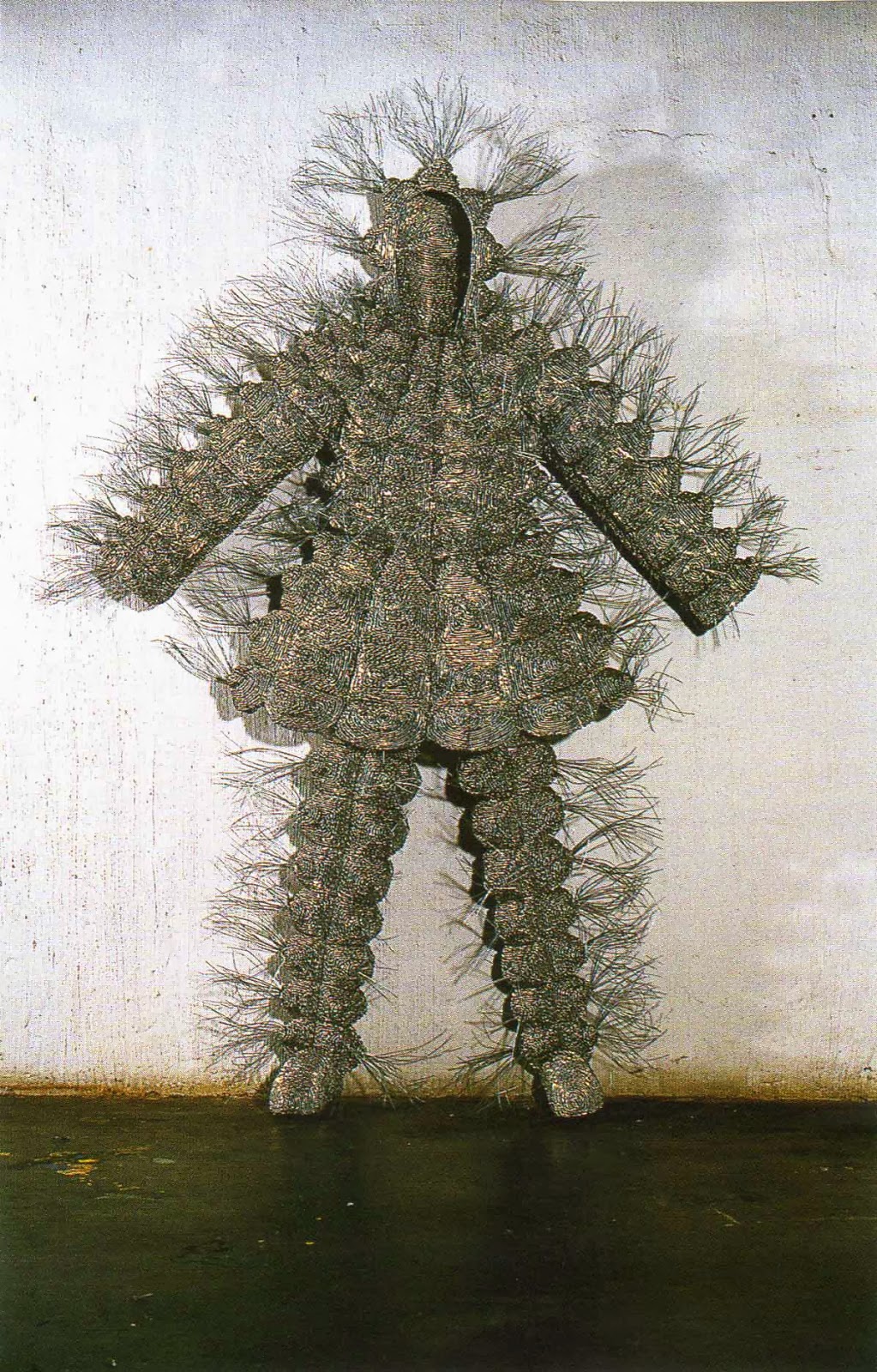 Some of Walter Oltmann's sculptures could be museum artefacts pertaining to an alien culture. Or even costumes from a sci-fi movie such as Neil Blomkamp's District 9, where alien insect-like beings became ciphers for disenfranchised foreigners in a futuristic South African context.
Intricate wire suits Larva Suit I (2001) and Larva Suit II (2004) and the giant cut flowers on display in the round of the Standard Bank Gallery, appear - because of their scale and design - to hail from another world, although they too seem eerily familiar.

The cut flowers evoke the wire craftworks flogged on street corners all over the country, although they are much larger and more intricate, appearing to be derived from nature rather than the work of a human hand.
The wire suits boast an even stranger confluence of iconography; the tightly woven surfaces of these garments are rigid and shiny, like armour. The styling of the garments recalls 16th-century European dress, except for the spikes protruding from them that enforce their function as armour and which also bring insects to mind, recalling the fine feelers that allow them to probe the world around them.
These strange, though familiar, garments are intriguing, forcing the viewer to question their provenance.
Who are these beings? Are they a product of our milieu? It is hard to tell if they are from the past, present or future.

As in Blomkamp's film, where the annihilation of the alien insect beings recalls apartheid tactics and more recently the persecution of African nationals, Oltmann's hybrid beings, as evoked through these uncanny garments, represent the future viewed through a prism of the past. In this way you could say that Oltmann's work prefigures a sort of Afrofuturism turn in popular culture that Blomkamp's film embodies, and which is present in the fiction of Lauren Beukes, who similarly uses devices to collapse time and revisit our political baggage through the smokescreen of science ficition. It is present also in the art of Athi-Patra Ruga, Nicholas Hlobo or even, with a stretch that of Mary Sibande, all visual artists employing dress as a means of renegotiating the past, present and the future in such a way that time and indices of identity become so muddled they expose the difficulties in coming to grips with the intricacies of cultural or political conflicts.
Or is Oltmann's distinctive aesthetic, defined by intricate tightly woven wire sculptures that evoke African craft, more a product of an earlier mode of post-apartheid identity art defined by explicit hybridity like that present in the work of artists such as Candice Breitz, Robyn Orlin, whose early Noughties pieces were preoccupied with identifying connections with their Africanness?

This large survey show, In the Weave, curated by Neil Dundas, should present an opportunity for the public and historians not only to consider the significance of Oltmann's oeuvre, but perhaps to reconsider it within the context of the shifts in art and popular culture. In some ways Oltmann's art feels fresh and dated, belonging to reflexes of the past, but also reaching towards an Afrofuturism turn that articulates the now. It is fitting then that his wire suits appear as both products of the past and of the future.
Interestingly, his most recent work - the thin wire works that recall fine embroidered tablecloths - does not feel immediately relevant, despite being quite exquisite.

And perhaps that is both the advantage and limit of his sculptural work; it is so incredibly beautiful, elaborate and labour intensive that it is so easy to be swayed by its appearance that whatever other value it might have can so easily be overlooked - or we demand less from it conceptually. This is the burden that all work created at the intersection of craft and art must be negotiated. Certainly, some of Oltmann's works, such as the large cut flowers or Pincushions (2001), present as empty vessels in the sense that they too closely evoke the pedestrian and have no significance beyond being products of an artist looking to blur the boundaries of his own identity as a white male - a figure that isn't customarily associated with African craft or woven products.

Conversely, the fact that his garments-cum-sculptures are empty vessels - the wearers of these garments are absent - is the quality that makes them so intriguing and significant as it leads the viewer to interrogate their identity and come to grips with their provenance (a theme that recurs in Oltmann's work).
This echoes their function as artefacts, objects that have been removed from their natural context and, while once they were functional, they now serve the purpose only of relaying a defunct culture and as such become substitutes for absent bodies.

As with objects of African material culture the objects become the conduits through which otherness has historically been studied or appreciated. Except that here the sense of "emptiness" that pervades serves another function regarding provenance as these vessels appear abandoned because they have outlived the wearer's use - they have outgrown them in a physical as well as a psychic sense. This idea is most obviously expressed in the work Chrysallis (2007), another intricate wire sculpture of a cocoon-like form with an opening for the head of the wearer. Once again, the wearer is not present, drawing attention to the fact that this garment has outlived its purpose.

The intricacy of these garments and their resemblance to insects or other natural entities, like plants, that also boast feelers, implies that these garments are not man-made but are like a second skin, an exoskeleton that has naturally evolved to enable the being to exist.  In other words these garments are organic exteriors rather than a decorative layer to conceal the body - they are part of the body before they are sloughed, like a snake shedding its skin. This coincides with the strong insect references in the costumes/bodies, as these creatures are subject to stages of metamorphosis that alter their external appearance in quite dramatic ways.

In this way these hybrid figures that are part-European, part-African and animal are constantly evolving and their changing external layer or exoskeleton is a natural response to conditions. They aid their survival and it is through a close study of them, which Oltmann allows, that we are able to understand their behavioural patterns and their status in the natural world.  Like the insect aliens in Blomkamp's film that are dubbed Prawns (and bear a resemblance to Parktown Prawns), these exoskeletons are frightening and seem impenetrable; they are mostly huge in scale and their metal feelers imply danger, but also communicate their vulnerability.

Their exoskeleton is so geared for protection it seems they live in constant fear. As there are no indications about their environment, you wonder whether their enemy is manufactured. Or is their appearance part of historical baggage that continues even though the threat has been removed?
All sorts of sociopolitical metaphors could be projected on to the imagined narratives that these exoskeletons evoke.

Perhaps Oltmann is interested in how we fill the silences that material objects present, how they become substitutes for an absent body, and how the decorative, the functional object, is subject to many transformations when it moves into a gallery setting and serves the viewer's gaze. Ironically, here its empty vessel status refers to its function as an art object with no practical use. - published in The Sunday Independent, February 9, 2014.

Posted by Mary Corrigall at 4:07 AM