Capitalising on the City: Infecting the City 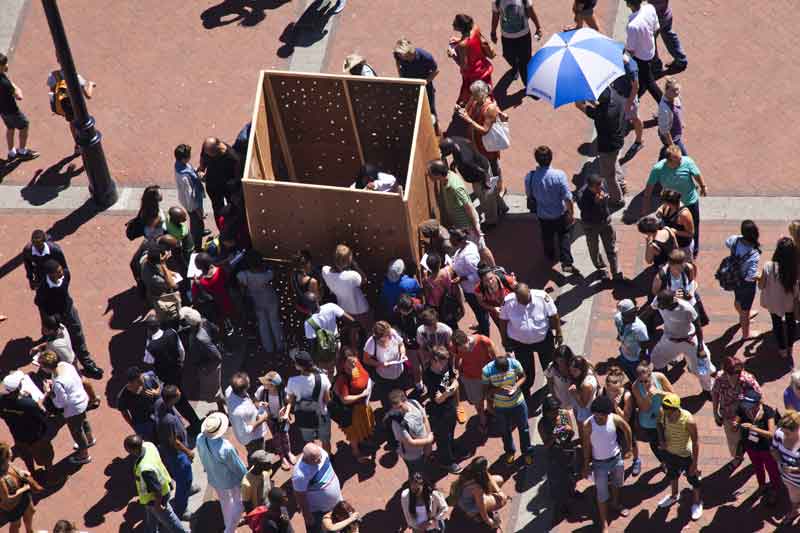 It is a warm summer’s evening and it couldn’t be an easier start. I’m lying flat on the grass in the Company’s Garden watching clouds floating across the sky. Metres away are Saxit, a foursome channeling contemporary South African jazz compositions through saxophones. The crowd languishing in this park parallel to Government Avenue in the centre of Cape Town grows as a slow trickle of newcomers joins the picturesque scene as the sun sets.  We’re comfortable, relaxed.

The music, the performance,  has temporarily grounded us to this space, binding an inhomogeneous group transfixed by this abstract language. There is nothing to understand, decode. One can just be. Perhaps this idyllic state shouldn’t be underestimated in a country where “public space” is so politically loaded and is constantly being renegotiated. Or maybe we are just languishing in a superficial condition, rooted in forgetfulness, though one of the tracks is about Nelson Mandela.

There are many mellifluous moments in this year’s Infecting the City (ITC) programme. Is this a positive reflection on this public arts festival that spans six days? “Infecting” seems to insinuate a more subversive interaction with the city, not simply an uncontested aggregation with the diverse spaces that define it. Perhaps the “infecting” appellation has become a misnomer since its inception six years ago.  On its website the festival is described as an event “conceived to deliver provocative and novel site-specific performance art”.
Marcus Neustetter’s Erosion directly invokes the “infected” title. Clad in protective suits and eye gear, Neustetter and a team of helpers appear to be dealing with toxic material as they spill thousands of glow sticks on to the steps in front of the Iziko National Art Gallery. These garish artificial entities depend on the absence of light to be seen and consequently operate as some intangible parasite, infecting the space around us. It’s as if Neustetter and his team have managed to harness this invisible entity. En masse these glowing sticks make for a spectacular sight; he exploits our desire to grasp the intangible.

There are a few site-specific works, but largely the city functions as a backdrop to work rather than the element that is activating it. We walk from space to space around the inner city, mostly around the Company’s Garden and Church Square. It’s all familiar territory. Cape Town’s a well-adjusted city, or appears to be; we do not enter any no-go zones, we are never challenged, questions are never turned on us, as if we are an invisible entity. These short jaunts, strolls, are led by the curator Jay Pather. He introduces each work via a loudspeaker and regurgitates the bumpf in the programme before each performance. He’s quite embedded in the festival, becomes a feature of it.

Read more »
Posted by Mary Corrigall at 5:39 AM No comments: