When the Party is Over: Athi-Patra Ruga


In the wake of Madiba’s passing it is probably a good time to meditate on that paranoid right-wing myth dubbed The Night of the Long Knives. The phrase is appropriated from the name given to a deadly (did any of their initiatives not involve death?) Nazi programme, which involved murdering over 80 political opponents. It was a bloody purge, and one that some right-wing whites have long believed would occur in this country after Mandela’s death. This fear is rooted in the idea that this magnanimous man’s reconciliatory stance towards whites would be eschewed and replaced by a violent programme to kill off all powerful whites. In this myth Mandela is positioned as the glue that held South Africa’s peaceful transition to democracy together. In other words, the miracle, this supposed peaceful rainbow nation will die with him.

Athi-Patra Ruga’s rendition of the Night of the Long Knives doesn’t quite involve a bloody purge. There is lots of red about, but it’s the tone of all the faux flora that colonise the image. In fact this series presents photographs featuring quite an idyllic scenario. His infamous ballooned character titled the white woman of Azania rides sidesaddle on a zebra through a tropical idyll, flanked by two characters that have been informally nicknamed the Abu-Dhabis due to the gold speckled hijab-like costume that conceals their bodies. Is this the (idyllic) world after the whites have been purged? If so perhaps their annihilation has seen the white figure take on mythic proportions, or maybe in such a scenario whiteness fittingly becomes an abstract idea rather than referring to skin colour. The white woman of Azania propped up by a decorated zebra isn’t any specific colour; she is the metaphorical rainbow nation with her multicoloured balloon outfit. In these photographs and other images at Ruga’s new solo exhibition, the White Woman of Azania Saga, her existence and the dream of the nation she perhaps embodies remains quite intact. 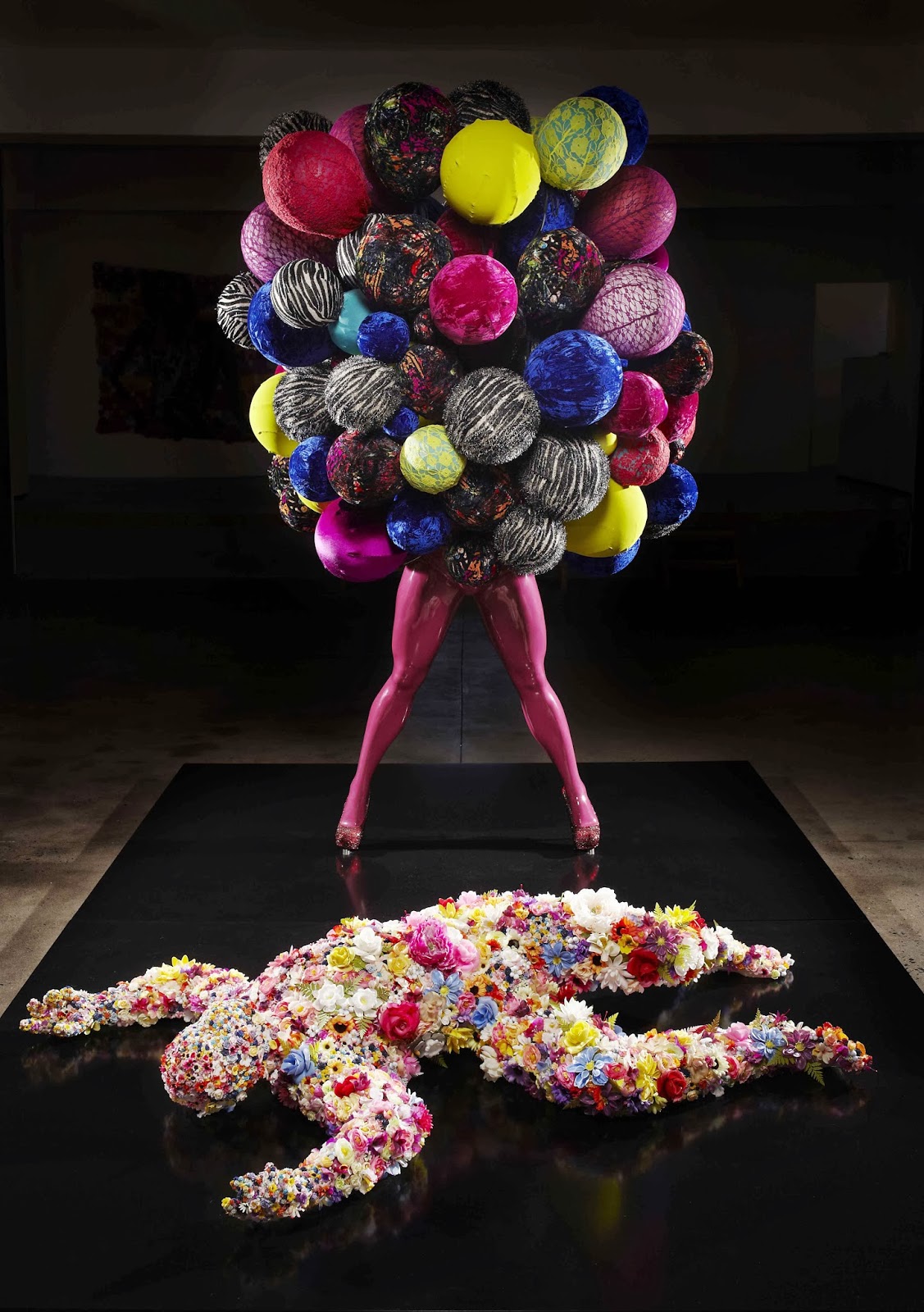 In Ruga’s performances she doesn’t enjoy much of a lifespan; after parading along the streets in the manner of a cavalcade of sorts he violently annihilates the façade and the socio-political ideologies it communicates – Azania, the rainbow nation dream – by bursting the balloons and streaking the streets with the coloured paint inside them. It’s a violent purge for sure, but of a fantasy rather than of people opposing some kind of twisted one.

These performances leave spectators in a precarious place; desiring the fantasy, while taking pleasure in observing it being dismantled and discovering what lies beneath it – Ruga and other performers (usually men) parade as  women. Maintaining a fantasy is about sustaining a pretence. However, as with drag, the form of pretence that Ruga enacts is one that sets out embracing artificiality.

Precariousness has been a hallmark of Ruga’s performance art practice, so, it is interesting to observe how this state can manifest or be sustained in a gallery show, where the works are not only solid permanent objects, are rendered in mediums that further articulate a sense of longevity, such as tapestry and stained glass design, but also appear to sustain the euphoric fantasy of which the balloon outfit had became a signature motif.

An attempt to reconcile his performance art with his artworks at this show, isn’t unexpected; the title connects them and the vast array of artworks (the show occupies both floors of the Whatiftheworld gallery) that expand on his performance art while feeding off it. This level of integration in Ruga’s practice is a new and rich development; there was always a disconnect in terms of subject-matter between the tapestries and his performance art.

Importantly, this show recontextualises Ruga’s performance art; the tapestries and photographs make his take on Azania tangible. Like the balloon façade, Ruga’s Azania is an artificial hyper-fantasyland; populated by zebras – apparently the main form of transport – and defined by a lush tropical vegetation – Durban on steroids – acid bright flowers, and with beautiful women adorned in leopard print coats it is an overstated African dream (read stereotype).

It’s a bit like a spread evoking Yves Saint Laurent’s 1960s Safari collection, or any contemporary African collection by Dolce & Gabbana, Ralph Lauren – there isn’t a designer who hasn’t done an African collection. This visual rhetoric, defines not only the photographs (the closest nod to the fashion image) but some of the tapestry works too, such as UnoZuko, a collaged tapestry featuring an ideal woman framed by plastic roses. Her leopard print jacket is appliqued on to the tapestry, which is more like a collage of textures and materials. The tapestries are like overworked couture garments, though they are representations or read like images. They are tactile pieces that exude the fashion stereotype of an idyllic African locale.

Naturally, it’s not just a fashion fantasy that they evoke, but a political one too; as the name Azania implies – a term that has over time and via different political ideologies and movements come to serve as a utopian African state.


All the characters in Azania, barring the beautiful ones that are the subjects of tapestry portraits, are anonymous, their faces and bodies hidden beneath a layer of fabric, balloons or colourful sun hats. There are no real people in this utopian setting; they are either abstract beings that vacillate between existing as objects and subjects or are ideal models of beauty – as in UnoZuko. In this way Ruga’s Azania sees a confluence of the glossy fashion ideal with a political utopia, where ideals and aspirations have produced this slightly crooked place where a desired fashion object – like a sun hat – is reproduced until it becomes a living being. It is through an excess that an alternative reality is produced. The sun hats that cling to each other, forming a cluster that engenders a being in the Night of Long Knives and a video work.

So, instead of bursting the fantasy, as Ruga has literally done in his performance works, in this show he feeds it, allows it to grow beyond the limits of the imagination. In doing so he takes it to its most extreme logic so that it appears ridiculous and unbelievable – it’s hyper-artificial.

This controlled environment that has become so warped because it is only shaped by desire (and greed), could be apartheid South Africa – a twisted white-dominated fantasy – or the early post-apartheid era when the euphoria of democracy and freedom gave rise to a rose-tinted dream, or perhaps it is a future place, or a naive vision from the past, shot through our knowledge of the present. The power of these images and the Azania they present is that they are open to interpretation; Azania can be what you want it to be.

That is the point; Azania is a shifting temporal African dream or nightmare, depending from which position you read it. It is beautiful, absurd, ugly and ridiculous. It’s real, it’s not real. And herein lies this state of precariousness that we associate with his performance art. Ruga’s doesn’t have to physically deflate the fantasy anymore, as he did in his performances by bursting the balloons to announce that the party is over. Through this exhibition he has discovered that by expanding on the “fantasy” and overstating the party-atmosphere and taking it as far as it can possibly go – like a stained-glass window that implies that Azania isn’t only real but is embedded in the architectural expression of the past – that he can achieve the same end; show it for what it is, a sham. It is just a less brutal route. For he allows us to continue to hold the fantasy if we choose.

Ruga isn’t concerned with the nitty-gritty details that sustain socio-political movements or fantasies about the state of a nation, his interest is in the visual rhetoric that reproduces fantasy (like the fashion, art and religious machines). Ultimately, he is intrigued by our perennial desire to see our fantasies dismantled, to the extent that we wish it before it has even occurred. - first published in The Sunday Independent, December 15, 2013.

White Woman of Azania Saga is showing at the Whatiftheworld Gallery in Cape Town until February 8.
Posted by Mary Corrigall at 10:00 PM