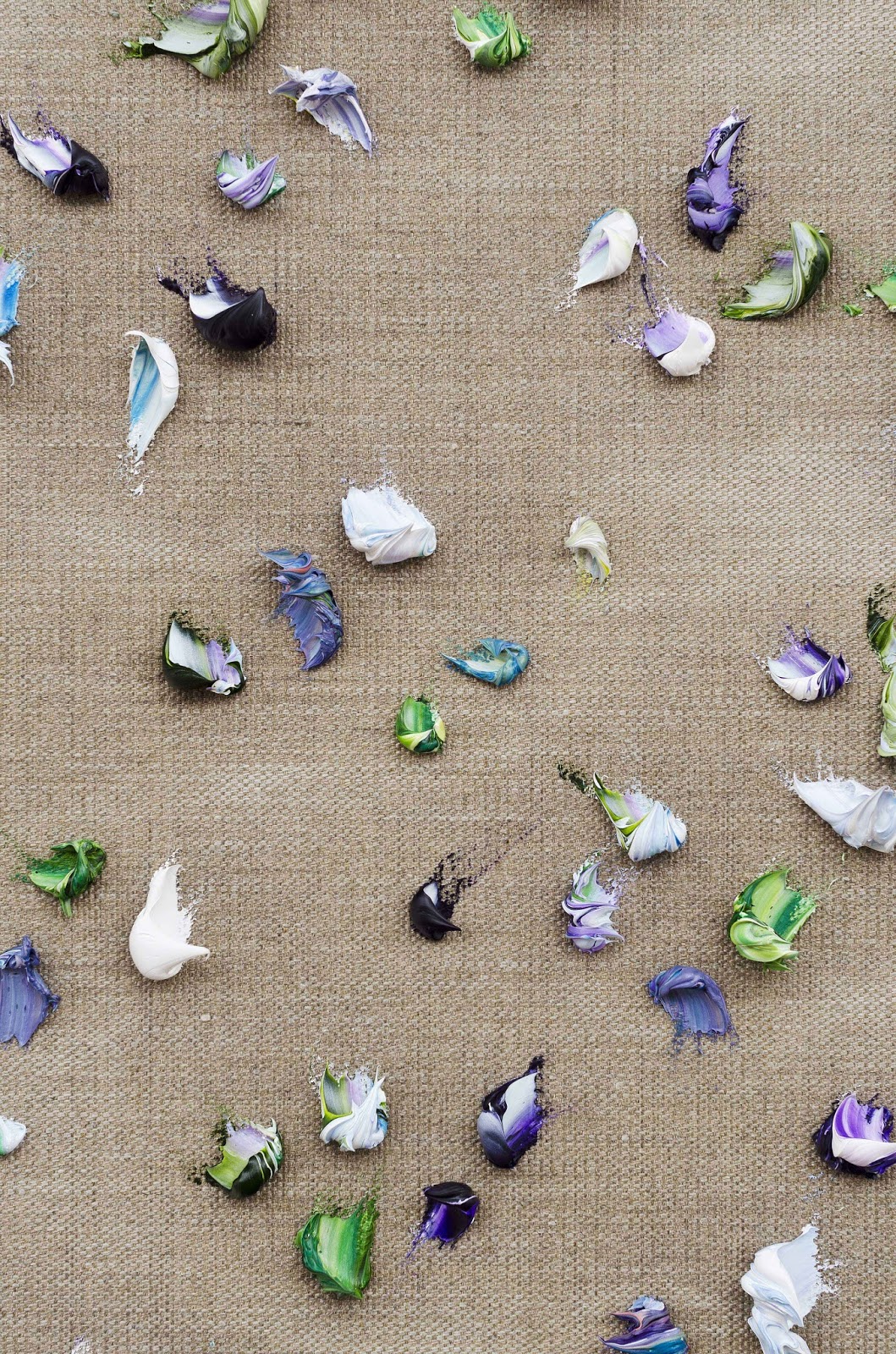 It takes balls to fill an exhibition with canvases colonised by blobs of paint. We're not talking here of small dots of paint in the pointillism tradition, where they are clustered together to form coherent figurative images. Nor are we talking about the infamous Spot paintings; high precision or even drippy dots that are produced factory style by a team of artists in Damien Hirst's employ.

What Zander Blom presents in his latest solo exhibition, New Paintings, at The Stevenson are actual blobs of paint that dot beige linen canvases. They are neatly applied, though some compositions appear more random than others, but largely there does seem to be method to this blob-paint madness. In fact, the word "blob" misrepresents the controlled application of them. These dabs of paint are evenly spaced and colour coordinated. In one work, these concentrated blobs are all beige, like the canvas. In others, Blom alternates the colours, presenting yellow and white blobs. In another untitled work - none are titled - they are in primary colours, and in another the paint is white with swirls of colours running through like an intense injection of a contrasting flavour swirling through a vanilla ice cream.

The sensory, physical qualities of paint are the focus; the blobs are oozy, viscous, yet hard. The hardness seems to contradict their soft, malleable appearance; the blobs protrude like hard chewing gum teased from the surface or tufts of piped meringue standing at attention. You want to eat them, touch them, or break them. They invite a physical response. Yet, these paintings also induce disbelief. Is this what painting has come to? Has Blom or the Stevenson gallery taken this contemporary art malarkey too far?
It is likely that the common refrain about contemporary art - "anyone can do this!" - will be uttered in front of these canvases, though getting those painterly peaks and swirls so uniform and delightful and knowing where to place them isn't something anyone with a palette knife can do. But it's more than this level of technical or compositional acumen that saves the work from being utterly ridiculous; it's kind of poetic too. The absurdity of it certainly feeds into this. It takes confidence, buckets of it, to put this kind of work on display, though Blom has been heading in this uber abstract, formalist direction for a few years, since he dispensed with re-enacting key moments in art history on the ceiling of his Brixton home. 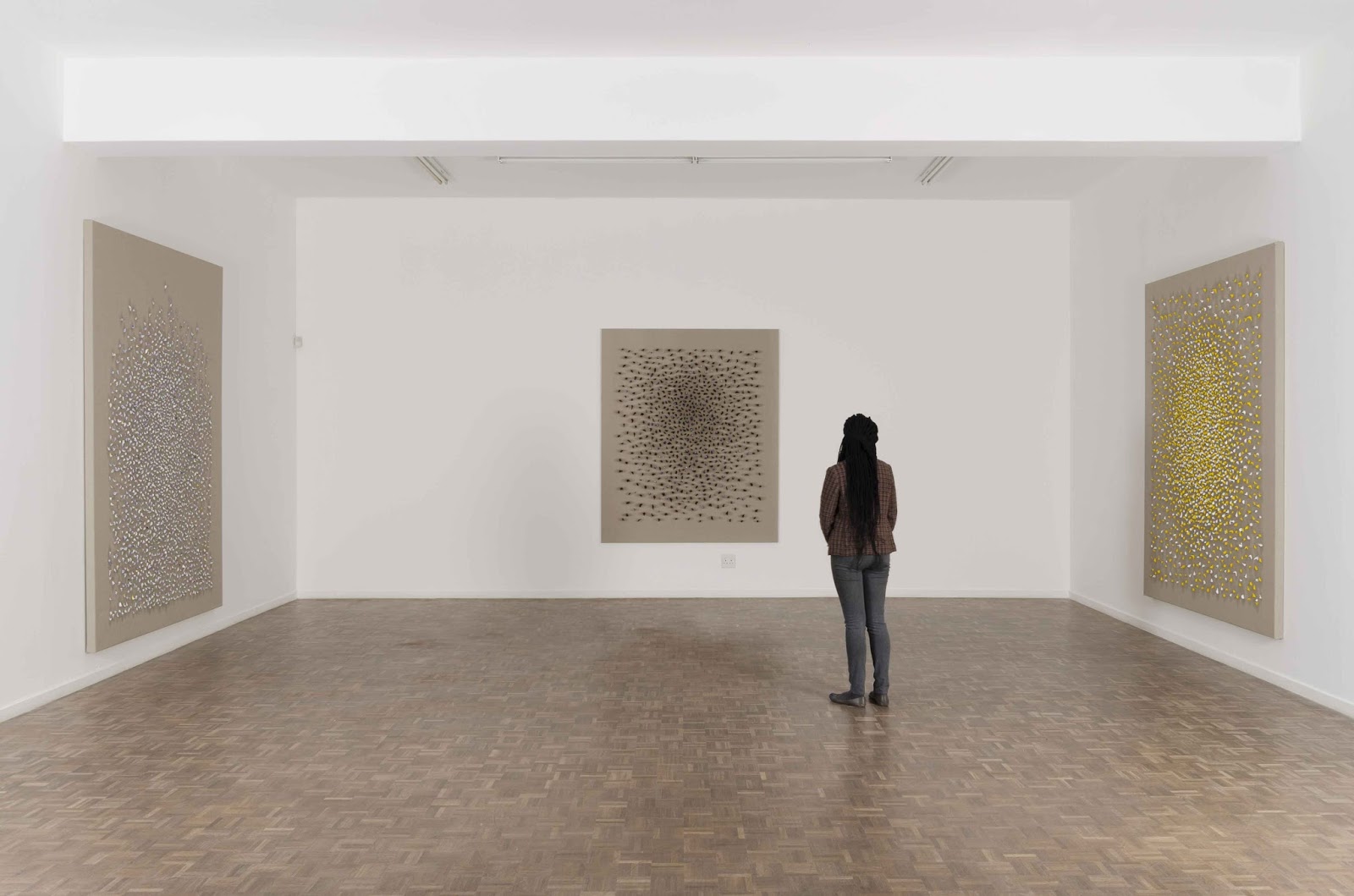 It is not just arrogance, or an extreme form of self-indulgence that is driving this work; its poetry lies in the conditions that have brought Blom to a place that he can only paint blobs. This is not an ironic statement; he dispensed with irony some time ago. "What's the point if it's just a joke?" he confided to me.
Blom's authentic investment in painting is perhaps unfashionable; most young painters these days have a tongue firmly in cheek when they have a paintbrush in hand. His attitude is refreshing, and brave. This genuine engagement with the medium compels you to discover how he arrived at this work you could dub non-painting-painting. He's like an inert dancer in a contemporary dance piece.
It's not that he is refusing action per se; there is movement in these artful daubs; the swirls and|protruding viscous peaks. Yet these marks have been arrested in the moment they have hit the canvas. Blom doesn't want to 'join the dots', so to speak. It is not about bringing about coalescence, creating recognisable forms with paint, because in doing so he would deny what paint is, can be independently of relaying a representation of another form.

While it may seem that he is refusing to paint, this brand of painting or non-painting isn't about resistance. In fact it is the opposite; acquiescence to the medium in the sense that not only does he revel in paint as a physical object, but also to the fact he is unable to "start" painting. This lends the work a kind of authenticity and transparency, which the oil stains that bleed into the canvases emphasises. Each dab of paint alters the canvas, spoils it even, if you consider the stain an unattractive addition.
Since he arrived on the art scene - around the mid-Noughties - Blom has been fixated with the "black hole" of painting, replaying its "death", which high-modernism, abstraction is thought by some theorists to have announced. At first this obsession seemed nihilistic, but it was also motivated by a genuine desire to discover, what might exist beyond this death.
This highly abstract and formalist turn in his work, which emerged around 2010, appears to be part of this journey. This aesthetic is the result of gathering "the pieces" left behind in the wake of the annihilation of painting, he claimed during an interview with the artist Odili Donald Odita.

Recently, I tagged Blom's brand of abstract painting as pre-painting - however, the label was prompted by an observation that the blobs of paint resemble an arrangement on a palette. This was inacurate; there is nothing random or accidental about these compositions; they are ordered into patterns. This could be a flaw. These patterns establish a pretty aesthetic, implying that Blom isn't simply sorting through the debris or detritus left in the wake of the painting's death, seeing where they might lead; rather, he is simply shuffling the pieces to find coherence or establish it. In other words, he is not comfortable with the chaos; he can't help ordering it and shaping it into a pleasing, perhaps even anodyne aesthetic. In this way the authenticity of his gesture is undercut by a superficial, ordered veneer that feels empty and detached. His "surrendering" to the medium is only partial, and perhaps it can only ever be.

Maybe he needs to be invested enough in each mark to continue, and to do so might require working with a formula, a fixed outcome that for him needs to be sufficiently pleasing to the eye and the senses. Yet it's disappointing in a way, because he is holding onto these fragments, these marks, so tightly, keeping them uniform and assembling them with a larger pattern in mind, he might as well be painting a conventional still life. Such a work wouldn't have the same appeal, it would be far too conventional and it would be in service of an illusion. However, Blom might also be holding onto an illusion: that he can paint without painting. - published in The Sunday Independent, August 25, 2013

New Paintings is showing at the Stevenson Gallery until September 28.

Posted by Mary Corrigall at 4:20 AM