The Art of Storytelling: Fiction as Fiction 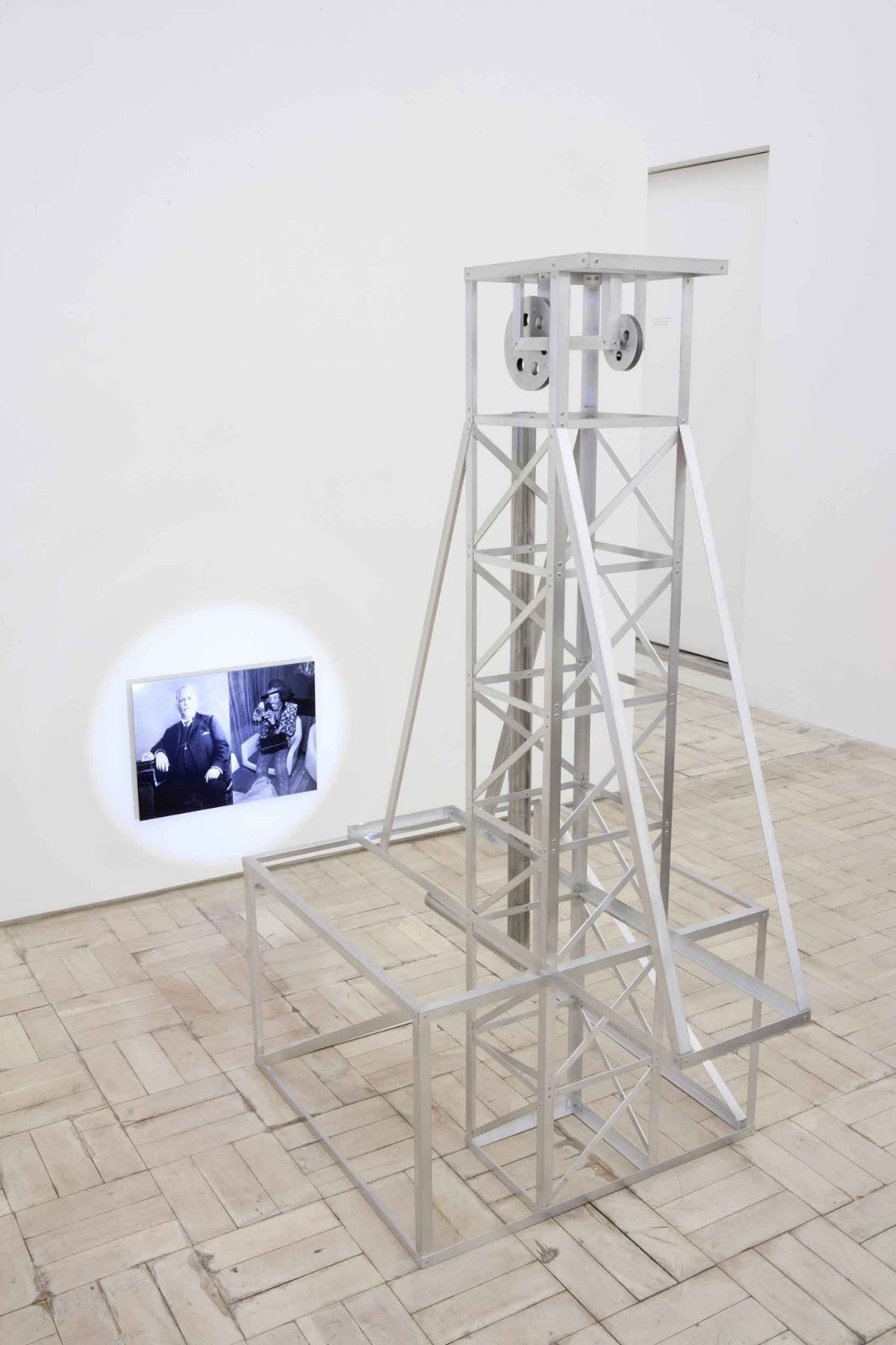 There is every reason not to watch Yto Barrada’s filmic work Hand-me-Downs. It’s on a small screen, you have to put on headphones and it is exhibited in the same room as two of the most powerful works on show at Fiction as Fiction (or, A Ninth Johannesburg Biennale), an intriguing installation by Ângela Ferreira that brings Jimmy Hendrix and one of the infamous Cullinans of the mining dynasty together and a ginormous black rubber sculpture by Nicholas Hlobo.

Film artworks are hard to consume in galleries. There are too many distractions – and they demand your time, attention and commitment in ways that other art doesn’t. Yet once I start watching Barrada’s film, I can’t pull myself away. It’s the cyclical narrative structure that has made a prisoner of me.

The work consists of a number of short stories, if you will, that mostly conclude with a nasty twist, sometimes a violent action that  deflates the droll domestic tale. Because the stories are narrated by the same monotonous female voice, we assume they detail the events of one individual’s life, though they shift between times, places and perhaps even subjects.

Barrada won’t allow you to join the dots and build a linear narrative. These stories are loose fragments, and like a damaged or incomplete memorial sculpture that only offers a very partial view of history, what remains has been subject to embellishment – it makes sense to build on what’s left instead of trying to retrieve what has been lost. These fragments are thus built into anecdotes, and are the “hand-me-downs” in question.
They are presented as, may even be, real-life experiences that have been fictionalised through the act of narration via a number of narrators over time. This is not all these fragments have in common; they express a bleak existence where a kind of unnatural reversal has occurred.

It’s about living through a time of crisis, where the normal and everyday is warped. This is what makes them stories worth telling. In a way these structured anecdotes are the mechanism that has permitted the subjects to survive the hardships they describe. A montage of found footage is synced with the text, mirroring some of the events. It’s a clumsy collage that further reduces the truth, though it adds new layers and constantly displaces the tales.

The function and different modes of narration that define fiction are the overriding theme of this exhibition, curated by Joost Bosland, which is the third and final installation of a series of curated group shows dubbed the Trade Routes Project.They all deal with the 1997 Johannesburg Biennale, which proved to be the second and last. This fact has long been lamented by the local art world and has for obvious reasons become the subject of art historical narratives, as academics, students and writers have sought to unravel its significance and the reasons and the impact of its demise. In this way, it has, like all pivotal art moments, become the stuff of legends.

Its absence has become part of a broader discourse around a crippled and dysfunctional cultural landscape that has become more vulnerable to commercial forces – Ross Douglas, of Artlogic, the organisation that instigated and manages the Joburg Art Fair, has long-held the view that this primarily commercially-driven event has replaced the biennale. The fact that an exhibition dealing with this event is taking place at a commercial venue substantiates the shift that has occurred.

The politics surrounding biennales are not the focus of Bosland’s exhibition. This show isn’t about reflecting on the past but meditating on an imagined future; an attempt to envision what shape the cultural landscape might have become had the biennale continued, though this inevitably leads to a meta-fiction concern.
This is inevitable given the exhibition isn’t a miniaturised version, or a re-enactment, of a biennale – that is impossible. Biennales are associated with sprawling displays, often boasting large-scale works that cannot be contained in conventional museums or commercial galleries, though some of the work is of the biennale genre – if you were willing to declare such a thing existed.

Nicholas Hlobo’s Tyaphaka has been on the biennale circuit, showing at the Sydney Biennale last year, but this is not the only reason it has been included in this show; it adds a twist to the theme, which is perhaps too easily expressed via filmic products. This explains the dominance of film at this show.  Film lends itself to visual (and textual) narrativising because of its sequential nature. And as Barrada’s film confirms, storytelling is a necessary ingredient to keep the viewer engaged, to keep them invested in what occurs next, though you could argue that Robin Rhode’s Yard (2011), a video of an empty shoe shifting position on a road, upturns this idea. 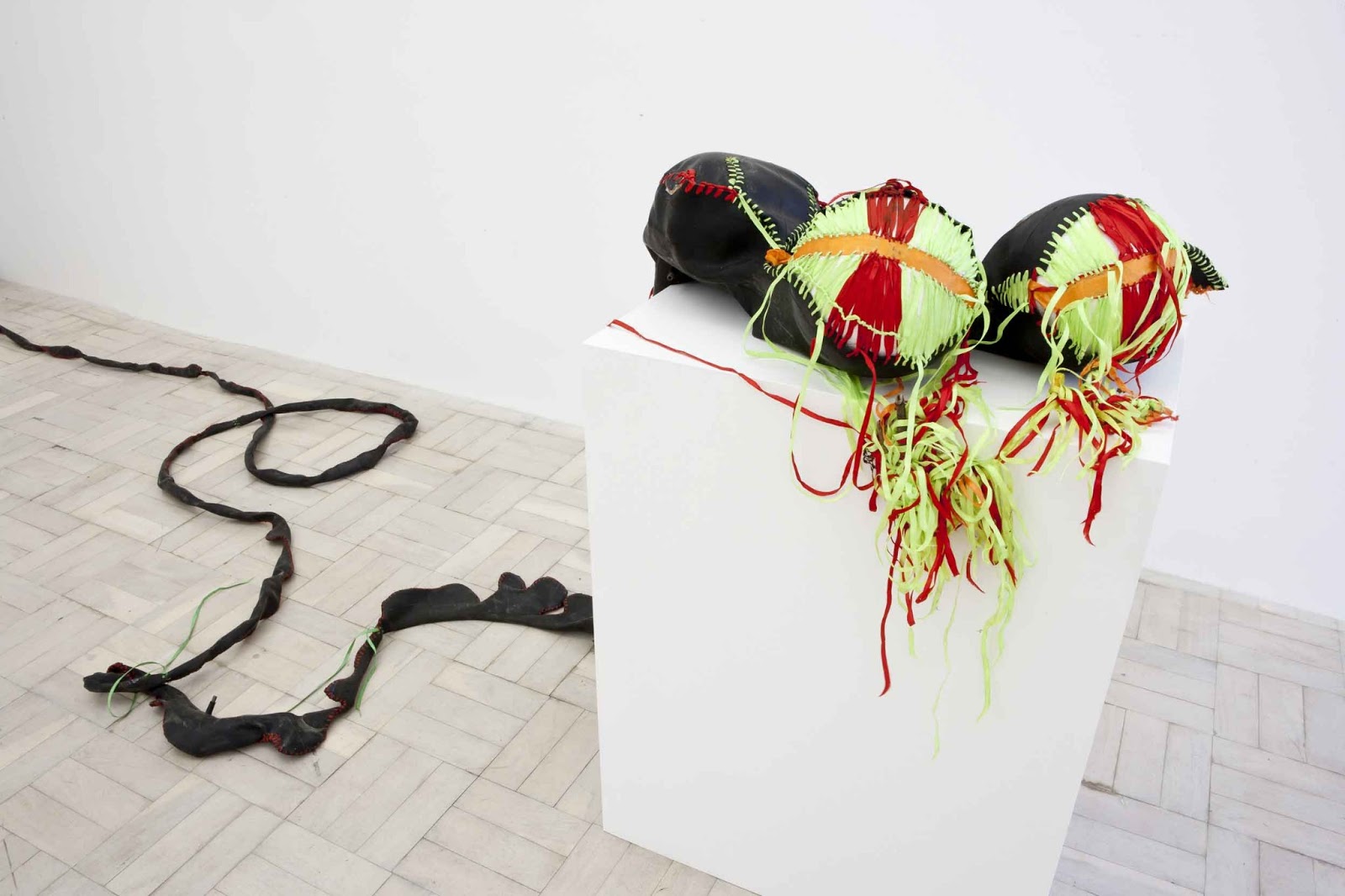 Hlobo’s Tyaphaka is a sequential piece. A single sculpture of two parts, with each displayed in separate rooms though the work is conjoined. You encounter the “eyes” first, which are elevated by a plinth.
These makeshift eyes aren’t embedded in a head, they are just balls, embodying the act of seeing, though ironically, they are detached and thus unable to see the large rambling black rubber body they are attached to via a long sort of umbilical cord that runs through to another room.
Tyaphaka is a Xhosa word referring to two states: one actual, having something caught in your eye, and the other metaphoric, referring to a blindness, an inability to see things for what they are.
Certainly, the first part of sculpture doesn’t prepare you for the large, amorphous body that it is attached to, so there is a very physical sense of being separated from what really exists.
Just as in a work of fiction, the end, the conclusion is delayed, forcing you to reflect on your inability to see it coming from the outset, though you derive your enjoyment from this. In this way the act of fiction relies on, exploits and in fact creates, a form of blindness. 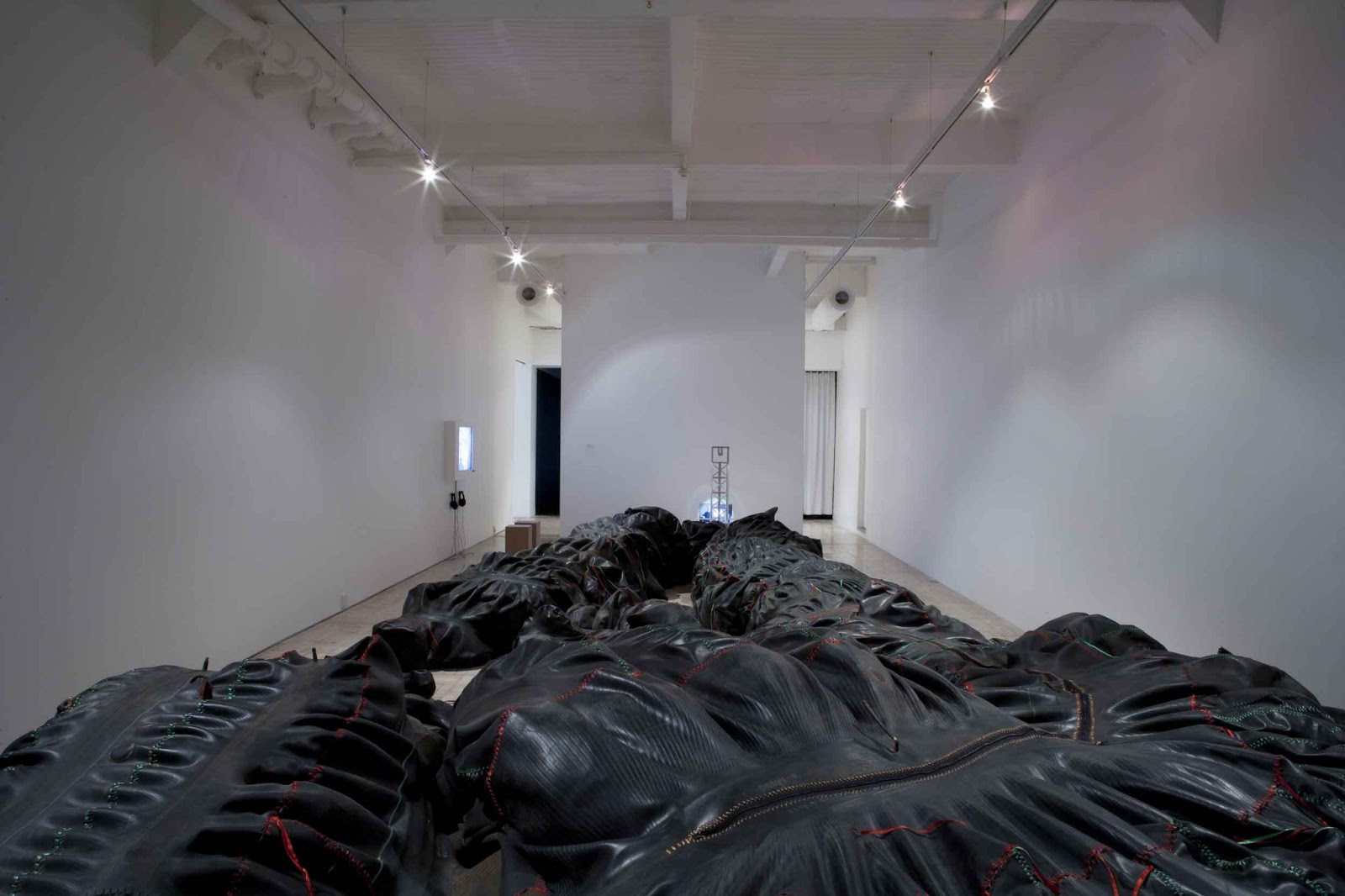 The bloated black mass that awaits in the other room doesn’t quite function as a “conclusion”; if anything it does the reverse – it generates uncertainty, serving as a cipher for any number of objects, beings or parts of the body. I love the sense of excess; this large mass practically fills the room. There is something menacing about it; like thick larva slowly pouring into a space and petrifying everything in it.

The most striking aspect of Hlobo’s sculptural works is the fact that it is tricky to grasp whether it represents the interior or the exterior of the body; he aims to conflate the two.
This rubber mass appears like distended intestines. However, on the opening night, Hlobo wryly remarked that it could be “a giant poo”, thus implying that it was something the body excreted. Could this mass serve as a metaphor for the truths we carry within ourselves but keep concealed?
This reading does offer both socio-political and psychological interpretations that could be quite appealing, though Hlobo seems bent on keeping the work in the gutter. But ultimately, what he desires, what all artists desire, is that we impose fictions on to their works.  Fictions susceptible to further ficitonalising. - published in The Sunday Independent, January 6, 2013

Fiction as Fiction (or, A Ninth Johannesburg Biennale) shows at the Stevenson Gallery in Cape Town until January 12.

Below: Nicholas Hlobo's Tyaphaka is one of the extraordinary two-part works on show at the Stevenson as part of the Fiction as Fiction exhibition.

Posted by Mary Corrigall at 1:50 AM