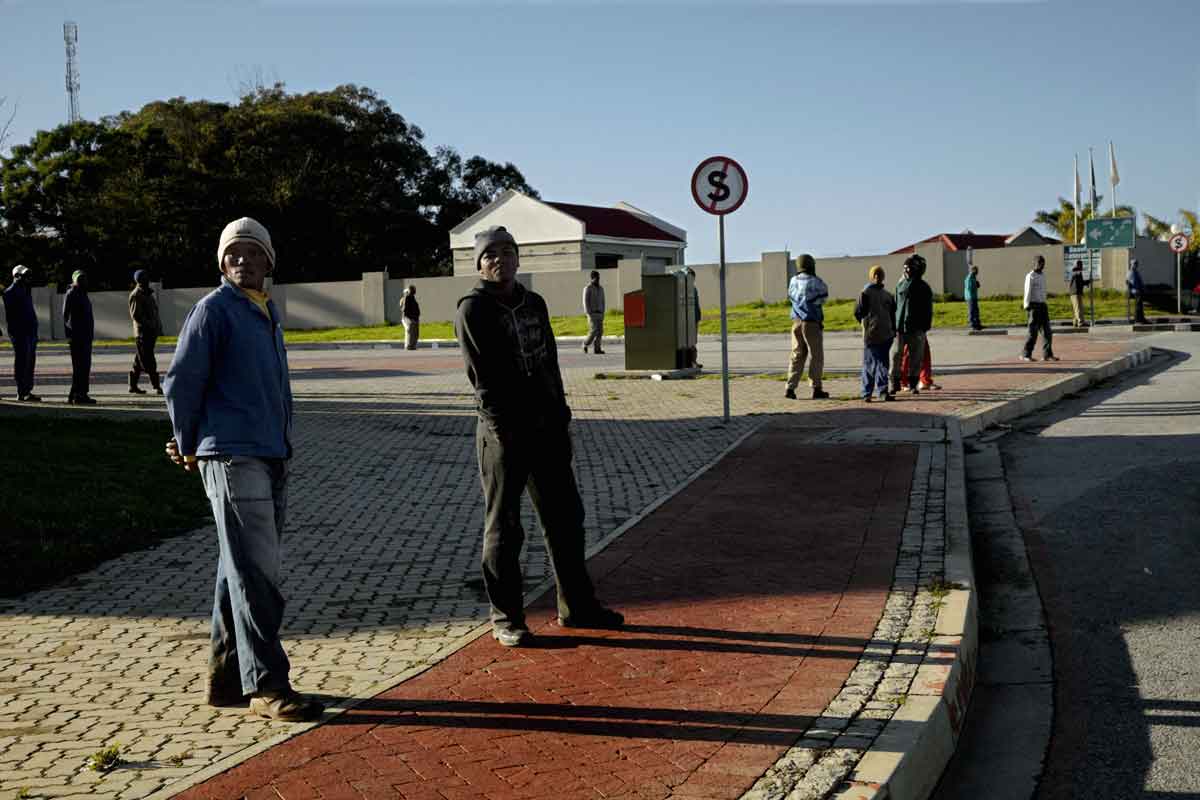 Can artists or photographers make work about the land without depicting it? This is the question I was interested in pursuing when I arrived at the Bus Factory in Joburg to view the Transition exhibition. It is the culmination of a project that saw six South African photographers teamed with six of their French contemporaries, as part of the French/SA Seasons 2012/2013, falling under the banner of the broader Social Landscape Project, which also included a display of snapshots by the public that were similarly centred on representations of "the land", probably one of the most loaded topics.

It's a kind of no-brainer theme but, because of this, it is tricky to say something new, to navigate it somewhere unexpected. Not that inventiveness or edginess is a hallmark of the French/SA Seasons projects; this cultural accord has more to do with exchange; in this context perhaps a visual conversation between local and French photographers, who appear to have been paired off, or chose to work independently, and were dispatched to different parts of the country that the curators, John Fleetwood, head of the Market Photo Workshop, and Francois Hébel, director of Les Rencontres d'Arles, had identified as sites linked to fraught historical legacies.

The title Transition attaches a caveat to these essays, alluding to the fact that these places are caught up in change or have been the catalyst for transformations of some kind. In this way the rural places or small towns, which are privileged in these works, are not static, or irrelevant in terms of illuminating larger national issues.

In this past year, no site has been more clearly linked to an impending need for transformation than the area of Marikana. The trouble at the platinum mine in this location forms the backdrop for Thabiso Sekgada and Philippe Chancel's photographs. Protesting miners appear in a few shots, but they cast their gaze wider, teasing out quite different themes, or perhaps the curators establish them. What is most striking about Sekgada's is the juxtaposition between the rural, untamed landscape, and makeshift structures in it with the sleek, imposing industrial architecture of the factories, mines. It highlights the discrepancy in power and material conditions between multinationals and their Third World employees and the clash such differences might engender. It is an image of a makeshift toilet made from corrugated iron in a grassy barren land adjacent to a large factory in the background that brings this glaring visual discrepancy starkly into focus.
The cavernous interior of the Bus Factory seems an unlikely venue for a photographic exhibition, but for the passing traffic of theatre and art people toiling in the building. A few images are framed, the rest are copies glued to long white partitions, imparting an informal quality to the show, albeit that some of the biggest names in South African photography - Santu Mofokeng, who has been selected for the German contribution to the 55th Venice Biennale, Jo Ractliffe, Zanele Muholi, who showed at Documenta (13) this year and Pieter Hugo - are represented here. The casual or informal display was intended to challenge the way in which photographic images have been co-opted and presented in gallery settings and thus positioned as "master-pieces", explained Fleetwood. The absence of titles and dates appearing with the images - they are contained in a separate catalogue - is also part of this drive to somehow detach these well-known photographers' work from the all-encompassing vocabulary of art and presumably to make the exhibition accessible. What does removing the "art" association mean for our reading of these images? Are we supposed to read them as popular culture ephemera?

Without being aware of this non-art imperative, I simply concluded that the display was simply chosen because it was inexpensive. It does have a makeshift look about it; and the wallpaper images evoke posters. Perhaps this attempt to disassociate photography from art and the invasive measures that are enacted on objects that enter this realm comes too late and is impossible to achieve when you are dealing with such big names that shoot for the art crowd. Not that they all deliver; Mofokeng's contribution, which documents the culture of protest around fracking, lacks his usual magical touch. The images simply fail to live up to his motivation for the topic in the catalogue.

A photographer of his ilk perhaps doesn't flourish within the confines of such a straightforward "assignment".
Muholi's contributions are decidedly uncharacteristic of her work too; there are no close-cropped portraits of young gay women asserting their presence, except perhaps the one encased in a coffin, a homosexual victim, who is juxtaposed with a series of colourful and ordinary wide shots of seemingly carefree young women going through the motions of the Zulu king's reed dancing ceremony. It's not just that the image of cadaver works at unsettling this series but one of a transgender male - Le Sishi - dressed in the same traditional garb as the young women participating in this annual ritual. Le Sishi obviously would not be able to participate in it - the young women's femaleness in this ceremony is solely linked to their anatomy.
What is most striking about Muholi's images is the way she tends to portray supposedly (you can't assume all the women are heterosexual) heterosexual women at the ceremony en masse, while in her treatment of a homosexual or transgender people she highlights their individuality. This may draw attention to their alienation, but she risks homogenising heterosexual women, who also fight prejudice, and also struggle under the narrow strictures of gender. It's good to see Muholi stretching herself. This collection has more dimensions to it than any of her previous work, though her images of the reed dancing ritual could be more nuanced. It is also satisfying that the work doesn't hinge on or portray the land. Instead the theme operates as a cipher for a contested space; which in this collection is the body - it is physically policed and punished.

Ractliffe's subject matter - the 31/201 Battalion of San veterans who fought in the war in Angola - doesn't come as a surprise. To some degree the collection also possesses the same visual persona that defined her remarkable series shot "on the border" in the exhibition Terras do Fim do Mundo. Ractliffe trades in banalities, ordinary overlooked sights and sites that belie hidden histories. This fact forces you to really look at the images, as if the act of looking will somehow reveal the invisible clues. The absence of captions or titles nearby enhances this.

Hugo's photographs feel typical of his approach too; in contrast to Ractliffe he captures the sensational - an old woman with a damaged eye, a house chopped in half and a cluster of trees in a semi-rural setting covered in clothing. As a result, his images capture your attention immediately, though they don't sustain your interest. But there are some here that do; such as a twosome on an empty plot of land next to a main road. They are seated in front of two small boxes on which they sell some wares. There doesn't appear to be any passing trade and, resigned to this, they fall asleep.

There is some benefit in seeing the perspectives that French photographers Harry Gruyaert and Patrick Tourneboeuf bring to the project, though the two are caught up in portraying predictable white/black wealthy/impoverished dichotomies. Gruyaert juxtaposes whites enjoying leisure time with unemployed black people, while Tourneboeuf's architectural study contrasts some ageing or neocolonial interiors with contemporary exteriors in downtown Kimberley, evincing these disjointed realities and the discrepancy between public and private worlds. But not all of the French photographers can resist taking broody romantic shots of the African landscape. - published in The Sunday Independent, December 23, 2012