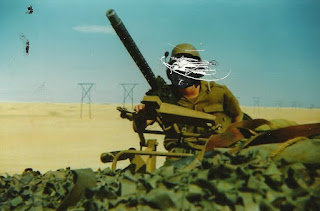 
It is likely that 1978 and 1979 were the worst years of Christo Doherty's life. After he left school they were the years he was immured to the SA Defence Force (SADF). He admits he wasn't a reluctant conscript; like most boys who had grown up playing with toy guns, he had fantasised about combat.
He was also too young to have formed any political stance. Not that that would have mattered: the army was full of principled young men who closed their eyes, kept their heads down and prayed for time to pass. Army life was unpleasant and dehumanising but for those like Doherty who went to the Angolan border to fight an apparent communist threat in opposition to the apartheid state, white society - or so the government then sold it - proved a deeply scarring experience. Little is known of the atrocities that occurred on the border but there is a tacit recognition that those who fought that silent war were never the same again.

Unspeakable sights from those skirmishes linger somewhere in Doherty's memory but he evades articulating or recounting them. Before he has even settled in the chair facing me he is quick to alert me that he "does not want to be foregrounding my personal experience" in the war. His reluctance is no surprise. His exhibition Bos, Afrikaans for "bush", also suggesting bossies (madness) - features a collection of glossy photographs of stylised representations of images reconstructed with miniatures.
They offer depersonalised narratives that do not speak directly about Doherty's experiences. They are simply reenactments of photographs. Belying the facade of child's play, some of the scenarios are gruesome. In one image, Mass Grave 1, two soldiers offload bodies into a deep pit full of naked cadavers. The image evokes memories from his time on the border, he says but he doesn't elaborate. He appears ill at ease. It's as if something is crawling under his skin. He keeps adjusting his woollen hat and stirring his cappuccino.

I try to take him back to 1978, a year Doherty would later realise was a turning point in the war.
"The South Africans nearly lost. It was the beginning of cross-border onslaughts. When you are in it, no one explains to you what is going on. It is only in retrospect that you get to piece it all together."
In the name of national security, a blanket of silence surrounded SADF activities on the Angolan border. Conscripts had to sign documents guaranteeing their silence. Journalists and photographers saw what the SADF wanted them to see during press junkets where they were taken to unknown locations and treated to military parades.
"They all have this in common. They were like other South Africans, they did not know anything. It was something that happened "up North", he says, reverting to a collective pronoun. It is a way of creating distance between himself and the border war but is also  evidence of Doherty's academic research - he is writing a doctoral thesis on the topic. I suspect it is not just an intellectual exercise for the fifty-something artist and academic. Though he claims his exhibition wasn't designed to bring about catharsis, his focus on border literature and memoirs suggests he is still reconciling with the past. Despite this he remains tightlipped about his experiences. He admits he had a traumatic time - "I think everyone who experiences combat finds it traumatic unless they are absolute psychopaths" - but will not divulge details.
This silence pervades his art too and while it seemed as if the stylised vocabulary he employed thwarts viewers' understanding of that period and creates distance  from the violent atrocities they document, it seemed possible that this glossy packaging was also for Doherty's benefit. He had reconstructed his own history in such a way that not only created distance from his trauma but made it easier for him to grasp. The miniatures allow viewers to slowly consume or study the horror rather than viewing it in a flash - "I wanted to present scenes that were childish, inappropriate and compelling," he says.
Though he had claimed that as a student of JM Coetzee at UCT in the early Eighties he had learned "never to spell things out", that it made for more interesting art, perhaps he had grown into the habit of suppressing the war memories. He had taught himself to be silent because there was no alternative.
When he left the army he "didn't want to talk about it - I wanted to put it behind me and move on with my life. I blocked it out. It didn't bear thinking about".
"You wanted to move on."

Even if Doherty had chosen to share his experiences, he doubts he would have been believed.
Many white South Africans didn't want to know the truth, proposes Gary Baines, co-editor of Beyond the Border War: New perspectives on Southern Africa's late-Cold War conflicts and associate professor of history at Rhodes University.
"Acquaintances, family members and those people they came into contact with also felt that this was something that should not be broached around the supper table.
"When these issues were broached in response to questions like: 'What did you do in the war and what was the border like?' and people started to open up, then a lot of their listeners didn't want to know too much. There is a sense that the white public was complicit in this silence."
Read more »
Posted by Mary Corrigall at 12:52 AM No comments: