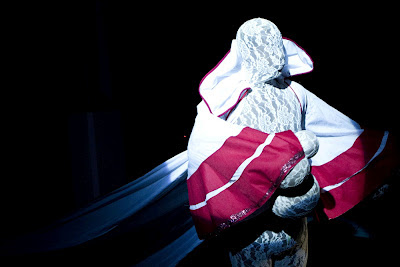 The last time I had encountered Athi-Patra Ruga he was seated in front of a television set in a makeshift living space in a dark basement in a disused building in Hillbrow. It was hard to read his expression as his entire upper body was obscured by party balloons. For all intents and purposes Ruga was absent. He might revel in performance, but his all-encompassing costumes, which usually obscure his facial features, negate his presence, his identity. In this instance, he appeared like a stylised cartoon character, a kind of hybrid object/ subject being, which is not unexpected given that he relishes recycling popular culture in his work –  “I like inhaling it and hurling it.”

Later he danced inside a circle of candles before drawing us into an awkward striptease act. The performance was part of the Hillbrow leg of the X-Homes project in 2010 that was engineered to mediate and explore the baggage tied to this no-go suburb of Joburg’s inner city. The act of observing “others” in these settings; the kind of touristic form of voyeurism that such explorations into these suburbs tend to generate dominated.  An encounter with Ruga’s faceless character in the bowels of this neighbourhood fed quite neatly into this theme; as an anonymous, seemingly dehumanised but curiously seductive being he presented us with the apotheosis of otherness.

Seated behind a desk meditatively working on one of his so-called Irma Stern tapestries – he has been translating her paintings into needlepoint artworks – in his new studio in Cape Town’s city centre, is the other Ruga I met last month. Dressed in a Trenery cardigan and a pair of fashionable shorts, this Ruga appears quite conventional. But he’s still performing. In-between, or perhaps to counter, some of his more serious observations about his practice and his vexed personal history that he talks around, he makes jokes and laughs. Undoubtedly, while he may only have an audience of one – me – he is performing. Interviews are a performance but, as any of his friends on Facebook will attest, his drive to entertain is one that he sustains even when the record button isn’t on. The laborious labour that needlework requires pulls him into a different place and headspace.

Read more »
Posted by Mary Corrigall at 10:24 AM No comments: