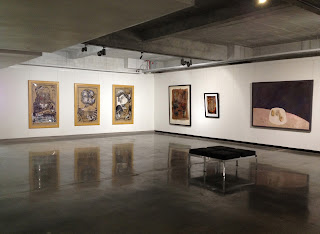 A group of men are struggling to get ‘‘god’s hand’’ in place. It’s a week before the opening of the new Wits Art Museum (WAM) and men balanced on scaffolding surrounding Jackson Hlungwani’s Hand of God are trying to lower the oversized wooden limb on to a bespoke base. Julia Charlton, the gallery’s senior curator, has to run upstairs to her office to consult a photograph to check the correct positioning of the sculpture before it’s set in place.

A year ago Charlton wouldn’t have been able to acquire a work |of this dimension; the Wits Art Gallery was a small basement room hidden below Senate House. In |this context, “gallery” was a bit of a misnomer, given its carpeted floors and limited dimensions. Signboards posted around the university’s environs might have advertised that a gallery existed there, but in truth it was an undersized storeroom; exhibitions could barely be staged there.
Charlton can’t wait to show me a 5m-long Dogon mask that is hanging against a wall at the back entrance of the gallery.
“No one has ever seen it before, because we simply couldn’t show it,” she marvels.
The inaugural exhibition, Seeing Stars, is simply an ode to the space. Works from the collection are chosen and hung to show off each room, the space, which is why you will find photographs by David Goldblatt located near portraits by Gerard Sekoto. Whatever dialogue occurs between the works will be incidental. “We picked artworks that suited each space,” confesses Charlton with a grin.

It’s a peculiar reversal; conventionally gallery interiors serve as a background for art. Charlton’s response is shaped by years of working in a dysfunctional space that simply couldn’t serve the collection or those interested in it. The new gallery has given her wings, room to breathe. But she hasn’t had time to think. When I ask her what effect the gallery |will have on the art world, the response is self-deprecating.
“Oh, I don’t know if we will do anything big like that.”

Newness has a distinct smell. It’s the wooden bases wrapped in plastic that have filled the air with this intangible aroma. The glass display cases that they will support are stacked against a wall in the main vaulted gallery. The walls are still a crisp white and the concrete and stone floors have yet to be scuffed or aged by the wear and tear that foot traffic will bring.

It’s hard not to be seduced by the gallery’s newness, to be present at its birth into Joburg’s burgeoning cultural scene. With the cash-strapped City of Joburg unable to maintain existing public art institutions, never mind initiate new repositories for cultural exchange, this isn’t an everyday occurrence. And it isn’t likely to become one any time soon.

Commercial galleries open (and close) with some frequency and while they are received with great interest – and perhaps scepticism – by the arts community at large, public/non-commerical institutions carry more importance. They generally have more permanence, but most importantly, in a context where the local art scene is dominated by commercial art entities, they present new territory for curators to make important statements about culture, the state of the nation or engage in art-related navel-gazing, unfettered by a commercial agenda. Artists, who haven’t found favour in commercial environments, also benefit greatly, as do the public, who are more likely to learn about art in an environment, particularly one attached to a university, geared towards education.

The novelty of the new gallery hasn’t quite worn off for Charlton, whose excitement has remained at a high pitch each time I come to view the gallery’s development. She evinces an almost childlike glee when she walks through the gallery. A sense of disbelief informs her awe, too.
Less than a decade ago she showed me the architectural plans in the former Wits Art Gallery. Raising R46.5 million to see it achieved seemed like an insurmountable task.

The time it took to raise the funds and get their plan off the ground was considerable. After a while the notion of this grand museum had somewhat turned into an urban legend, though it had begun to feed a dream to establish Braamfontein as the new locus of Joburg’s cultural life.

Read more »
Posted by Mary Corrigall at 11:23 PM No comments: