Candice Breitz: I think I remade the Ghost Series 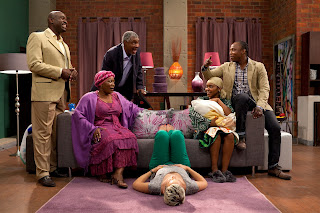 ‘Our guests don’t watch SABC1,” said the hotel receptionist when Candice Breitz phoned to enquire why she couldn’t find the channel on the television set in her room. Breitz wanted to watch Generations, one of the country’s most watched soaps. She had become hooked on the series since returning to South Africa to create a new "South African" work based on the soapie and to prepare for the first major exhibition of her work since she left her country of birth in 1994 for the US, and later, Germany, where she is settled.


The hotel staffer sent to Breitz’s room to locate the terrestrial channel giggled when Breitz confessed to her fixation for Generations. Their laughter disguised their uneasiness or disbelief that a white person would be interested in watching a series centred on black people, or so Breitz presumed. She might not admit it but part|of her attraction to Generations is because of this presumption; this racialised view of who consumes certain kinds of popular culture. She doesn’t just want to challenge prescriptive ideas about white people – she wants to be able to identify with black people.

The last works she made that dealt with South African issues, the Ghost series (1994-1996) and Rainbow series (1996) caused a bit of a ruckus because she was perceived to have over-identified with black women – this was particularly the case with the latter where pornographic imagery of white women were spliced with ethnographic images of black women in traditional outfits. Her detractors suggested this form of identification “conveniently” allowed Breitz  - and white women - to negate complicity with the apartheid system.

“I think I ended up remaking the Ghost series,” she admits though in Extra! she has chosen to enact her statement in a space designed to project an empowered existence – Generations is all about expressing black middle class lifestyles. In this way she does not present her subjects at the “liminal point of defeat”, which the ethnographic images of women in traditional gear in the Ghost series insinuated - as one of her critics claimed.

But she has a point; similar strategies are at work in Extra!. Once again the image of a white woman – Breitz in this instance – is inserted into an environment associated with black people – Generations. This was achieved by doing double takes during the filming of some episodes. A scene would be filmed twice – the first time as per the script, and in the second take the actors would run through their normal lines but this time Breitz would be present, positioned in the middle or the sidelines of the action. The footage of the latter was edited into a video artwork. Her presence in it, depending on the kind of visibility she assumes, has varied impacts.

In one scene where Breitz is lying on a table surrounded by the soapie’s characters, she begs for attention and it seems impossible that she could be ignored. Yet the characters continue as if she is not there - it is as if she is invisible. In another scene, she is part of the background setting, embodying the role of the titular Extra!. Breitz wears a meditative stare that evokes the mood of the character in another scene, engendering the notion that they are in sync with each other. However, the fact that Breitz’s presence remains constant and without acknowledgment by the characters implies that she is omnipotent – an overseer, the silent orchestrator of events. The different physical placements evoke the vicissitudes of whiteness.
“The classic position that whiteness has taken is to claim invisibility; when you speak about race you talk about blackness and not the constructedness of whiteness,” she observes.

Breitz is sitting in a small room adjacent to the Standard Bank Gallery where the exhibition is being staged. She is taking a break from overlooking the installation of her works. Breitz, a celebrated international artist, is articulate, accustomed to speaking about her work. She is excited about Extra!. Every time I try to steer the conversation towards her practice, she steers the conversation back to Extra! Her yellow-nail-varnished fingers constantly dart around in the air as she speaks. Her South African accent is hard to trace among the German and American inflections.
“Whatever I do here has to be built in to it a careful acknowledgment of my externality and distance. On one hand I feel very South African – I never felt I became German. On the other hand I have been away for a significant amount of time.”

Read more »
Posted by Mary Corrigall at 11:05 PM No comments: