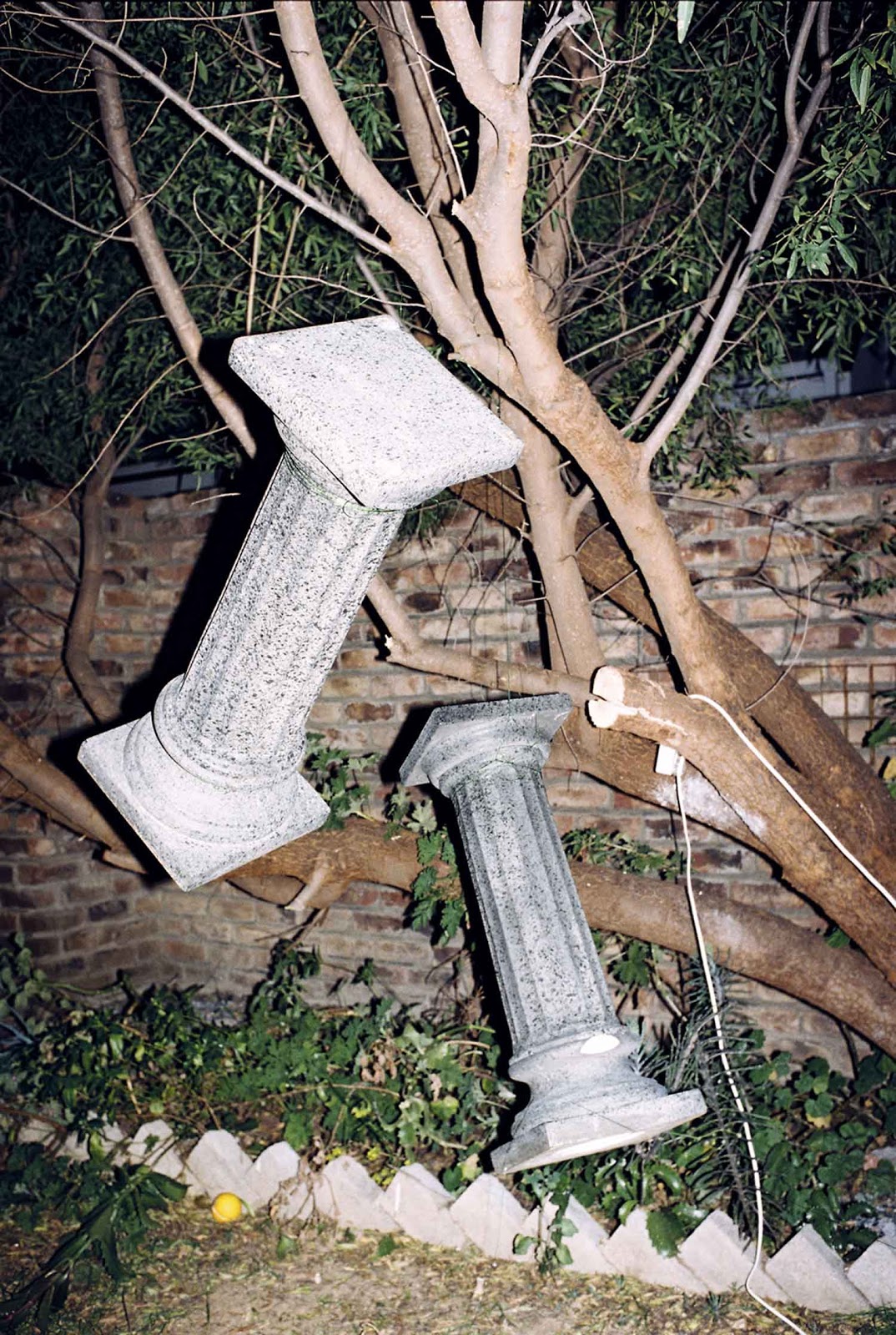 On the floor are stacked layers of tiles and bones, next to a porcelain dog that looks like it is guarding the installation. It’s one of many Kemang Wa Lehuleres that fill the first room of the Stevenson gallery. It’s like a neat cross-section of a disaster site - a clinical excavation.  The title, I can’t laugh any more, when I can’t laugh I can’t… (2012) speaks of this incongruent mix of trauma and kitsch, this oscillation between digging into a past horror, while acknowledging the act of digging is clichéd.

The gallery is surprisingly empty, given it’s the opening night, but then there are four other openings or events in the Woodstock area – so the art-going-loving-buying-crowd is spread thinly between Blank, the new experimental space dubbed “Evil Son”, the Goodman and Whatiftheworld.

My companion, Malibongwe Tyilo, aka Skattie, the infamous fashion blogger of Skattie What are You Wearing, has slim pickings; fashionable or stylish gallerinas are his niche market and there are only a few old ladies knocking about the gallery. He snaps one of them, wearing a pair of silver trainers, and me in one of my statement necklaces. It’s one of five that I have brought to Cape Town as part of my Art Week Cape Town survival kit, which also includes a box of Panados (to counter headaches brought on by cheap wine at openings), the handy Artweek map, and a smartphone for tweeting and photographing so I can keep track of the work I like.

There is a lot to see and process, with two or three openings a night over the space of a week. While the Joburg art scene has wound down by mid-November – there is not an opening until next year – it’s high art season in Cape Town. December and January are the most lucrative months for galleries, what with the city brimming with affluent tourists and visitors.

Few are, however, risking it with a solo show; except for the Goodman, which was due to open with a new William Kentridge exhibition wryly titled No, it is. But then it’s Kentridge, one of the most bankable local artists. Largely, it’s only public institutions that are showing solo exhibitions; the AVA is showing La Sape, a collection of painted portraits by Zambian artist Zemba Luzamba and, at the Iziko SA National Art Gallery, Mikhael Subotzky’s Retinal Shift and Jared Thorne’s exhibition, Black Folk, are being exhibited.

Interestingly, Luzamba and Thorne, both foreigners, are tackling representations of black identity, though from different angles. Luzamba is interested in how black male identity hinges on the business suit, though this is juxtaposed with a painting depicting the various uniforms or historical costumes that bell hops or porters might wear. He demonstrates how clothing activates a sense of authority or an illusion of it – the porter might wear a smart costume but in this context it is not a symbol of power but servitude.

Thorne’s exhibition is slightly more complex; his subjects wear outfits from the fashionable to the conventional; they are young, affluent, and probably well-educated black South Africans. It’s supposed to be an ironic study of positive role models of blackness. In other words, it is engineered to counter another (absent) body. There is something of a glossy magazine feel to some of the images; they could be adverts but for the fact that they are not styled or stylised. His subjects are stiff; they know they are being observed and are perhaps each negotiating the terms or reasons for the context. What do they symbolise? They are materially, socially and politically “free” – can these facts facilitate transcendence of blackness?

Most of the commercial galleries are spreading their bets with group shows to cater for every taste. Want a sculpture? You should probably snap up a Kyle Morland or a Rodan Kane Hart, two young Cape Town artists who are looking at becoming permanent fixtures on the scene down here.The two seem to be pursuing this new brand of formalism that seems to have taken hold. This kind of work doesn’t require any exhausting decoding; their dry titles aptly describe what the works are; Morland’s got an Inverted Saddle Cut, and Hart Two Brass Plates in Tension showing at Blank Projects gallery in a show aptly titled When Form becomes Attitude. It’s a witty show.

It’s Jared Ginsberg’s Ladder and White Line (yes, that’s what it is) that tickles. The white line in question is a piece of rope that is constantly moving; a motor whips it around every so often, constantly shifting its form. I like the idea of a line as a sculpture, and one that's not static but is repeated and possesses possibilities, though it is fixed too. The installation has an Art Povera feel about it that also appeals.

Nico Krijno also creates his compositions from a variety of found things; vegetables, printed fabrics, a tree, a couple of pillars. Pattern Content #1 is a photograph of garish printed materials placed together; it exudes a strong Eighties aesthetic in line with the long-standing Eighties revival that has been shaping the nature of our wardrobes. The work thus feels fashionable, there is a vacancy to it. This sense of vacuity, and tackiness even, pervades the show and maybe it’s unavoidable: we’re so used to loaded conceptual statements. The work here has a sort of DIY-popness to it that is satisfying in terms of rallying against the fastidiousness that a focus on form has historically entailed. Perhaps this is punk-formalism? To the gallery’s credit, this group show is underpinned by a cohesive visual and discursive signature. So many of these summer-time group shows-cum-commercial drives are not well curated, if at all. They are simply a miscellany of work by artists who happen to mostly be from Cape Town and are affiliated to these galleries.

Vague, broad-sweeping titles afford this phenomenon. Pretty much any work by any artist could be exhibited under the banner that Brundyn + Gonsalves were flogging as Material/Representation. This postmodern turn involving the rejection of single narratives seems to have been rather glibly exploited by gallerists. It’s hard to read art in these contexts; in the absence of a theme that thoughtfully engages or draws out a particular aspect in it and other works by an artist that ground it within a trajectory or body, they tend to function as floating islands. 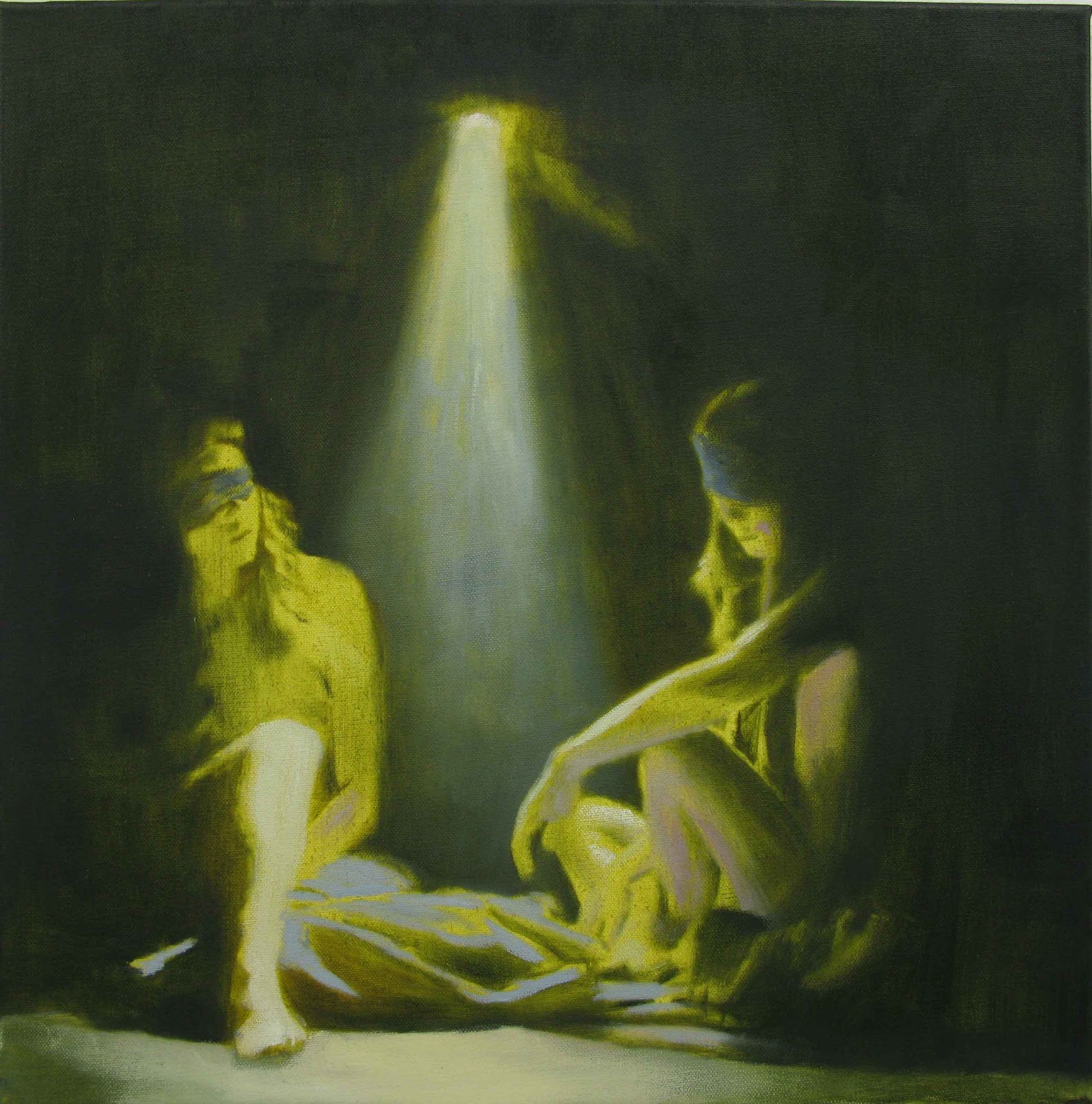 For some reason – it’s so often inexplicable, irrational even – it’s Matthew Hindley’s The Meat and the Bone series that lingers in my imagination for days after viewing Material/Representation. Perhaps it’s because I can’t place it. The series consists of small paintings of a group of naked young people that appear to be held captive. In one, two blindfolded women wait in an empty dark room. There is a retro feel to the rendering that recalls illustrations from Hardy Boys covers. They are inquisitive young people who’ve been burned by their curiosity. Their naivety and innocence has brought them to this (abstract) place that sits outside of the world. They have yet to grasp the gravity of the situation. Or maybe they are not trapped at all, but enacting a twisted ritual of their creation, something that mirrors, runs parallel to what occurs in the real world.

A similar work of his is also showing at Smac’s Paint I: Contemporary South African Painting 2002-2012. The same names pop up everywhere; Sanell Aggenbach is showing works at two other shows including this one. Are there too few (Cape Town) artists to go around, or are only a handful bankable? This sprawling exhibition is divided between two large galleries and it boasts some of the best contemporary painters – Mary Wafer, and the now über popular Georgina Gratrix – but it doesn’t feel like a comprehensive survey. It feels disjointed and doesn’t illuminate the shifts that have been ocurring in painting.

It’s a delight to see Johannes Phokela’s South Pacific Seascape for the simple fact I saw him working on it a few years ago before his large solo at the Standard Bank in 2009. It was supposed to go on show for that exhibition and wasn’t completed in time. The painting’s cheeky subversion of colonial rhetoric bears no relationship to the paintings around it. This is a glorified showroom, like a furniture factory where a room’s elements have been crudely disassembled.

This lack of cohesiveness, this sense of fragmentation, might not simply be explained by a lack of curatorial talent in this city or an overriding commercial imperative,  but could have something to do with the fact that artists in this city – country – are pursuing a multitude of themes via a diverse set of (visual) languages that cannot be united. This retreat from the political that this punk formalism spells – this anti-idea art that creates a space for artists to bypass the political – implies a desire to move beyond old tropes. This echoes in Wa Lehulere's installation. South African art is no longer defined by easily identifiable pursuits. This is a good thing. 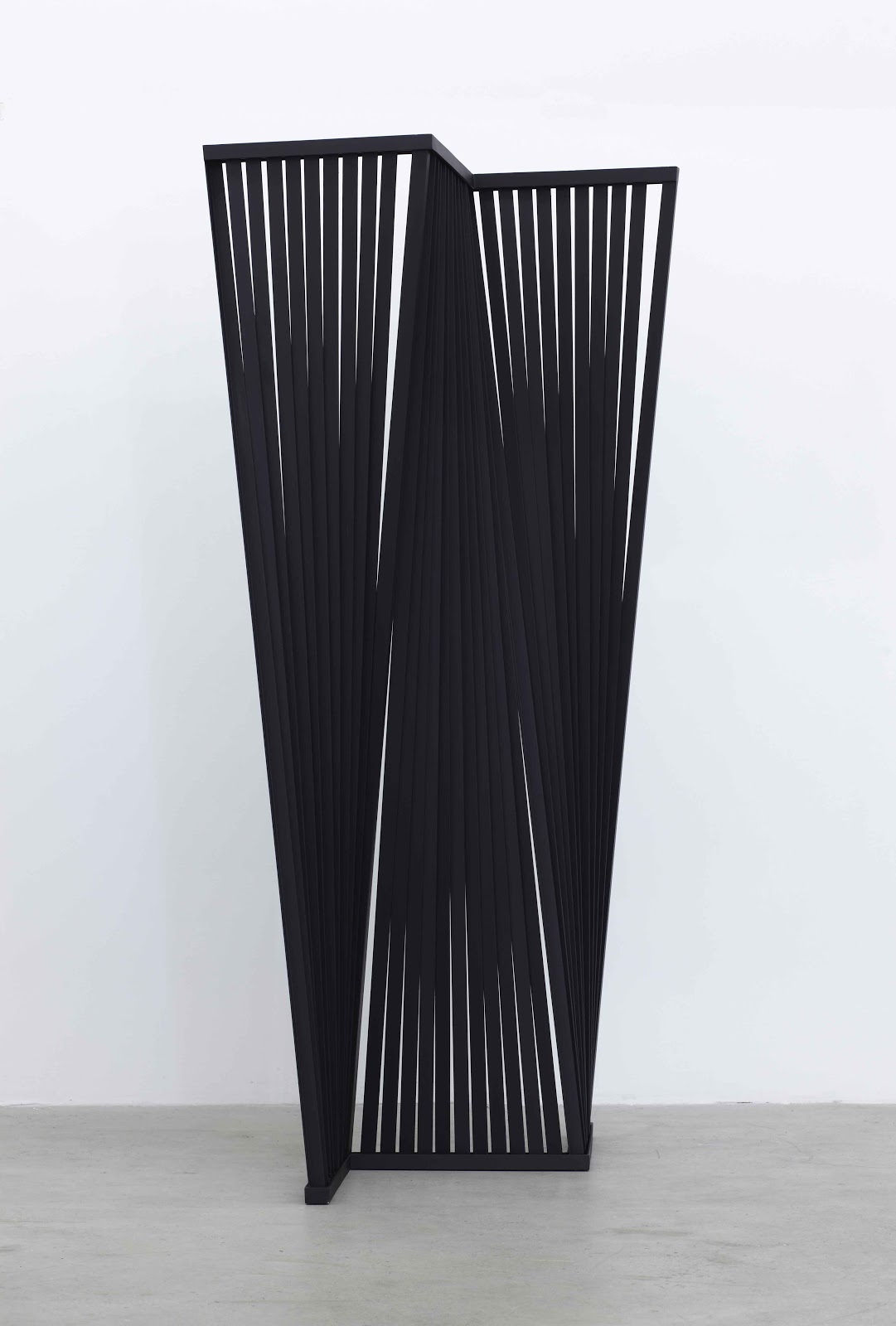 This idea is brought home by the group show Positive Tension, at the Whatiftheworld Gallery which, above all, seems to be centred on showing new work by emerging contemporary artists - despite the sexy title, which points to this nuanced friction between the political and apolitical, the conceptual and post-conceptual punk formalism. I am reaching for labels because I want to name what is informing these works but realise in doing so that they evade these limited tags.

There are political undertones in some of the works by Athi-Patra Ruga, Julia Rosa Clark and Rowan Smith, but there’s some formalism too in the shape of another Hart sculpture dubbed The Illusionistic Bend and a few John Murray abstract paintings. But even Hart and Murray are driving different ends of the stick.
Hart’s work is laden with architectural references that summon a dissection or distillation  of urban forms. These discrete elements aren't teased out through the display; the exhibition feels clumsily arranged.

Perhaps gallerists are expecting art critics to write the narratives underpinning South African art and make sense of it.

Serious curating is supposed to be the domain of public art institutions, so perhaps it is too much to expect nuanced displays in commercial galleries. However, in this country, where the former have such limited resources, the latter have come to see themselves as hybrid players; fulfilling a service to the public and the arts community while turning a profit. Maybe only the larger players can afford such altruism, such as the Stevenson gallery, where the strongest group exhibition is on show. It’s rather grandly titled Fiction as Fiction (or a ninth Johannesburg Biennale) and is curated by Joost Bosland. It has an international feel not only because it boasts work by artists from other countries – such as the now fashionable destination for art, China – and local artists that show and/or live in other countries (Robin Rhode and Nicholas Hlobo),  but the theme is unpacked through a diverse range of voices that complicate it, rather than explicate it. It’s the only group show that demands a second viewing – and embraces the possibility of film in the context of art. But its scope is also limited by its commercial imperative; only work by locals represented by the gallery is shown here.

By the time the Stevenson fills with the kind of gallerinas Tyilo hunts, he has moved to another venue. We are both looking for the same thing; someone who plays with the rules, sets themselves apart. The only difference is that fashionable art has a hollow ring to it. - published in The Sunday Independent, December 16, 2012.


Images: top: Nico Krijno’s Composition with Pillars and Tree, on show at Blank Projects’ Form with Attitude
Middle: The Meat and the Bone III by Matthew Hindley is on show at Brondyn + Gonsalves
Bottom: The Illusionistic Bend 4 (2012) by Rodan Kane Hart, which is showing as part of Positive Tension at the Whatiftheworld Gallery