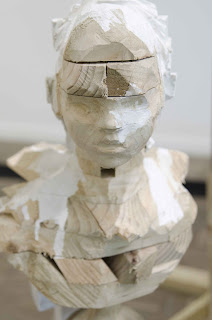 A Thousand Things is the kind of work you step into. This isn’t an ordinary installation; it’s highly immersive. It is contained within the large room at the back of the Stevenson gallery but it is the black skirting, supported by a raw pine structure framing the installation, that signals you have crossed over a boundary and into a different territory.

The boundary appears familiar, as do the objects that are placed within this room-within-a-room, but it’s an ambiguous space, colonised by signs that hint at a variety of  real and abstract settings. The black skirting appears like a picture frame, engendering the notion that you have entered a painting. There are other signature elements associated with painting – the wooden easel stands that prop up most of the sculptures, the drips of white paint on them and, of course, the historical motifs of Baroque painting; a tortured human frame splayed open, a skull and the disembodied wings of an angel.

The sculptures are all unfinished; the treated pine they are made of is exposed, with only a few dabs of white paint hinting at the first layer of priming that might take place.This creates the impression that you are roaming through a studio of a prolific artist who darts between works, unable to complete anything. In this way the installation and the studio become a fused entity. The line dividing process and end-product has collapsed, but so too has the one between the art and the gallery.

Botha has subtly rewritten the white cube, treating it like a blank canvas, while harnessing its inherent politics.The black skirting, the plinths and some fluorescent tubing suspended vertically from the ceiling work at suggesting a museum too. The classical-looking busts strategically placed around the room – one is embedded in the structure – compel viewers on a predetermined journey, as is the case with a museum display.

It is not a conventional journey – while Wim Botha constructs a space, he similarly works at destabilising it. All the architectural elements that would typically work at conferring significance on the sculptures have been omitted, rather than removed. The walls and the plush carpet are invisible entities we hold in our mind’s eye, and the props supporting the sculptures have been stripped down.
However, Botha has left enough signs to suggest this is a loaded space. This is a viewer-centric installation – Botha depends on us not only to complete the picture or pictures (it suggests such multiplicity) but uses this compulsion against us by making it impossible for us completely to fill in all the gaps. Perhaps this is what makes this exhibition so compelling. Like the silence in a musical score, the aspects that are not present are as important as those that are.

It’s a case of refined editing. Botha has stripped things down to a point at which they exist on the edge of what it is they are and have the potential not to be. This kind of treatment is a hallmark of this extraordinary exhibition, which reveals Botha to have reached a turning point in his art – or perhaps the apotheosis of a journey he has been on for some time. The subtle refinement of the motifs and themes that have defined his practice, suggests everything he has done before has been in service of this body of work.

The most intriguing and significant parts of this installation are the sculptures on display in this unknown space. They exist in an indefinable temporal state. They are classical subject matter, yet they appear new. This in itself could be insignificant – the Tuscan homes in Joburg’s affluent suburbs show the ubiquity of connecting with old-world aesthetics. However, there is something different at work here. Botha isn’t delivering these forms to us in a pristine state; instead, they arrive to us in a state of becoming. They are incomplete. And not incomplete in expected ways either; some of the fundamentals are missing. In one sculpture there is a hole between two wooden panels. They will never resemble the grand objects on which they have been modelled.

Like the structures supporting them, they are transparent. We can see the blocks of pine that have been stacked to create them, so the air of mystery has been destabilised. Further complicating this view is how Botha has rendered these forms. There is a sense that they have already been degraded before they have reached their potential. The features of the busts are not cleanly rendered or crisp – they are slightly smudged and distorted. Some have empty sockets for eyes, the heads of others look damaged and misshapen. They are like victims of a violent catastrophe and the space is like a mausoleum that commemorates this damaged society. Instead of the departed being remembered at their height, they are immortalised at the point of their destruction. The mood is elegiac.

Loss of power reverberates around this invisible sepulchre-cum-museum. This quality evokes all sorts of subtexts. You could impose a socio-political reading or even an art historical one – the death of the tradition of Western painting and Western imperialism. But it seems so facile in the context of this multilayered work – it’s not called A Thousand Things for nothing. Besides which, this extraordinary visual plane Botha has created exists outside of reality. This is where it draws its power. Stepping into A Thousand Things is like stepping into the past and the future at the same time. It is this quality that makes the installation so strange and exhilarating.

Solipsis is another remarkable sculptural installation, though it is not immersive. In fact, as its title suggests, it is contained. It’s a conglomeration of pine scaffolding, wires and fluorescent tubing.
You can’t climb into this one, as much as you might want to – it is a visually arresting piece. Wings fashioned from polystyrene ride at the top of this large sculpture/|installation, hinting at flight or the desire for it.

The contrast between these raw materials is satisfying, as with the rough wood, the white paint and the black skirting in A Thousand Things. There is an aesthetic at work in this show that is deeply pleasing; it’s unpretentious, messy, textural and modern. It allows for an economy of line that makes it possible for the objects to exist between being made and unmade. Once again the rawness of the materials, the scaffolding or wooden easel supports and the tangle of wires from the fluorescent tubing suggests that Solipsis is what remains after the “real” structure has been removed.

In other words, we are privy to the underlying mechanics of something familiar, but we don’t recognise it because its outer casing has been removed. In Solipsis it is not a thing we are looking at, although it is a compelling thing with bright white lights, suggesting movement. Perhaps this is the key to the work – the light and polystyrene allow Botha to create a thing that is transitory, allusive and furtive while still holding our attention because of its spectacular presence. It’s as if he has harnessed the invisible.- published October 21, 2012.

Posted by Mary Corrigall at 4:36 AM