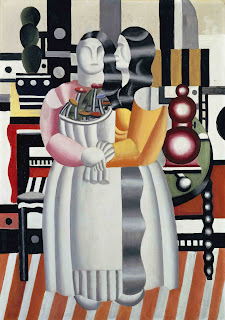 This is a curious discovery, particularly because the word "master" is likely to annoy Afrocentric art afficionados here who have grown tired of Western artists being placed at the centre of art narratives, as the term implies. This exhibition isn't really for art specialists - though you may find them quietly revelling in a Frederic Leger or a Francis Bacon - it is for ordinary people who turned out in droves for the Picasso and Africa exhibit that showed at the gallery in 2006. Hailed as the most well-attended art exhibit in the country, it proved that European "masters" have pulling power that far supersedes local or African work. Hence the gallery's preference for this outmoded term.

This exhibition is another French/SA cultural initiative, though it carries more gravitas as it marks the official opening of France-SA seasons 2012 and 2013, a cultural exchange programme that will first see French culture brought to SA before cultural products from our backyard debut there. On the ground it is engineered to foster cultural exchange and collaboration. However, the presence of business leaders, diplomats and politicians at the exhibition's big opening underscored its role in fostering political and economic ties.


The "master", which indirectly implies French superiority in the area of art, perhaps pays tribute to Europe's contribution to the world of the arts, but the inclusion of a few works from outside of France in the exhibit hints at the widening of the once closed narrative around art. This exhibition is unlikely to ruffle any feathers, as Picasso and Africa did. This is not a provocative exhibition, it's more of an exercise in art education as it maps a linear path - 'the story of art' -  from Impressionism to Cubism, Pop Art and Conceptualism vis-a-vis how the human form was represented during each of those movements in art history.

The human body was the only common thread that united all these disparate forms of expression, Ramond suggested. The theme also has universal appeal; the first iteration of this collection of works under this rubric was first shown in Shanghai in 2010.

In SA, the discourse around the body is obviously a consequence of apartheid, which defined identity based on physicality. This collection is underpinned by a gendered agenda. The predominant human form in most images are that of women. The term "masters" designates a masculine hand at work, true of most of the work from the 1900s. Interestingly, except for an image of a prostitute by Picasso - Nu aux bas rouges (Nude with red Stockings) (1901) - and a woman lying in a hammock by Emile-Othon Friesz, the women are clothed. In this way they are not simply tendered for display. As the treatment of the female body shifts from the Impressionist vocabulary to the geometric style that defined Cubism, it's clear that female subjects were vehicles for experimentation.

The Impressionists enjoyed a more sensory engagement with the body. In Renoir's painting, his rendering of the pallid flesh of the young woman and the delicate flush of pink on her cheeks makes her present in an emotive sense. Braque attempts to get beyond this world of appearances in Femme au chevalet (Woman at an easel) (1936), revealing the dark negative of his subject's frame: he breaks her down to geometric forms. This level of detachment from the humanity of the female subject intensifies in Leger's robotic female twins in Les deux femmes au bouquet (Two Women with Bouquet) (1921) - pictured above.

The tradition of the female subject as a motif of Western painting is challenged in the second half of the exhibition, which plots out a development of this theme from Pop Art through to Conceptualist phases. The effect of this legacy - the objectification of the female form - is most obviously recorded in Annette Messager's Les Tortures volontaires (Voluntary Tortures) (1972-1973). A series of photos of women exercising and undergoing seemingly absurd beauty treatments exposes women's complicity in the remodelling and grooming their bodies not only for the male gaze, but an internalised concept of beauty and a sense that their value is attached to external appearance.

Orlan, a performance artist, makes alterations to her body to fit another ideal: a quasi-African notion of beauty. It counters the pretty young women that preoccupied the "masters" but it, too, requires refashioning of the body. It may have made more sense for the "master" in the title to refer to the ideal form imposed on women during different eras. - published in The Sunday Independent, July 22, 2012.

l20th Century Masters: The Human Figure is on at the Standard Bank Gallery until September 15
Posted by Mary Corrigall at 10:07 AM