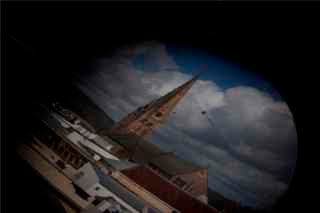 There is such an overabundance of art forms and works at the National Arts Festival that the adjective “excess” comes to mind. It's a polyphonic explosion: multiple voices, images, gestures and dialogues seem to coalesce into a chaotic continuum as the days progress. This is what makes this annual arts explosion in Grahamstown such an invigorating and stimulating experience. However, for an arts critic/commentator tasked with making sense of the festival, it is tricky attempting to fashion a clean narrative.

Mikhael Subotzky’s exhibition Retinal Shift, which showed at the Monument Gallery and Gallery in the Round, serves as a useful model to read the festival for it is, through this progressive show, that he meditates on excess, the excess that reality, the South African experience, presents. How, as a photographer, do you make decisions about what images to isolate from such an endless stream of experiences that all beg to be captured before they disappear with time?

Historically, Subotzky has isolated and zoned in on particular subjects, the Ponte, the Pollsmoor prison population. In this exhibition, however, he embraces a self-reflexive stance, analysing, sorting through his archive (and others), which leads him to probe the mechanics of photography – or the process of documentation. This inward gaze is best expressed in Self Portrait; an image of the retina of his eyes taken by an optometrist. Winning the Standard Bank Young Artist Award seems to have compelled this young artist to survey his photographic “eye”. I suppose the idea is that every photograph he takes ultimately reflects more closely on him than his subjects. With this in mind, he becomes undiscerning about what “class” of photography his images belong to.

In I was Looking Back (2012), he presents photographs from his professional work and those charting his personal life: photographs of friends, himself. So it is that images from Pollsmoor Prison are juxtaposed with ordinary family photos, a girl leaning on a gate in a rural setting. This diverse collection covers a wall. It’s an excessive display, presenting a cacophony of imagery that appears chaotic, haphazard even, though there are discreet narratives that thread through, loosely uniting some photographs.A visual mirroring occurs between a picture of a man lying on a bed in a prison and a woman lying on her stomach getting a skin treatment. There are no captions, no contexts to these images; they are free-floating, allowing for multiple kinds of narratives to be assembled or disassembled. It’s up to you.

It is a novel route for a winner of the Standard Bank Young Artist award to take, to choose to curate old work, existing material, rather than generating a new body. It is not just a practical response. Everything is “curated” these days. Consequently, this term has become a blanket one to describe the act of arranging and selecting existing material. Pinterest, the web tool that enables users to create their own virtual mood boards, is the apotheosis of this kind of activity.

This culture of “curating” imagery and Instagram, a sort of Twitter for images, has destabilised the value of photography; anyone and everyone has become a documentary photographer. The central activity now is in arranging and curating what already exists because there is such a glut of it; it needs to be organised – and reorganised.

Subotzky’s approach implies an awareness of this, though he has attempted to create a balance|between curating/organising the work and allowing it to remain “unarranged” – chaotic. He wants to keep the work open: unresolvable. Mostly this is because certain aspects resist being reconciled.

In the video artwork Don’t Even Think It (2004), Subotzky presents us with a stream of images. These have been linked to form a slightly disjointed film that documents the coming and goings outside his flat in Cape Town in 2004. The result is a survey of a cross-section of people; from whites taking bags out of their boot to a homeless man who masturbates behind a wall. People come and go, an ad for ice-cream turns in the wind, birds fly across the screen. It’s an average street, a snapshot of reality. However, it is meaningless – there is no binding narrative because the activities, both insignificant and large, don’t always belong together, though they are inextricably knitted into the same urban fabric.

Voyeurism obviously haunts that work as well as CCTV (2011), a work consisting of footage from surveillance cameras in Joburg’s inner-city streets, which presents a variety of unsavoury characters caught on camera committing petty crimes in the city. They don’t know they are being watched, so the most significant moment is the realisation that their actions have been observed – they realise this fact when the police pick them up.

Subotzky isn’t interested in crime: rather, he has sought out a situation in which there are material, physical consequences for being watched. Once again he is curating found material, though in this instance he isolates aspects to demonstrate a point. For Subotzky, subjectivity occurs only when the subject is aware of a viewer, camera. Yet he is interested in discovering what also occurs before this moment; this is something he is usually unable to witness.

In Moses and Griffiths, it is with this awareness that he presents footage of two citizens of Grahamstown recounting parts of the town’s history. Subotzky thwarts any efforts at our coming to grips with their tales, however, as the sound alternates between four screens on which the films are projected. This diverts our attention and breaks the linearity. In this way he weaves the stories around each other, collapses them, so that we can hold on only to fragments.
You eventually have to surrender to the material knowing that it is not about retrieving order but finding a way to sit comfortably with the chaos, the polyphonic palimpsest that defines our past – and present. - published in The Sunday Independent, July 8, 2012.
Posted by Mary Corrigall at 7:41 AM