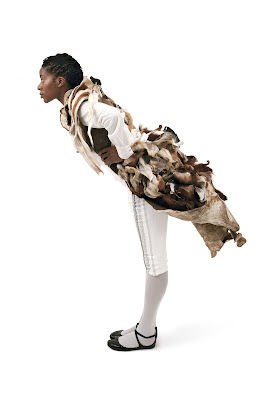 In Michiel Heyns’s Invisible Furies he introduces a Pablo Picasso painting, Figures At The Seaside, as a touchstone for the complex dynamic between lovers. The modernist work shows atomised body parts splayed and entangled as the two identities become intermingled. Observing the artwork, a character in Heyns’s novel proposes it expresses the submission of the female, a desire for defeat, and the male compulsion to conquer.

In Nandipha Mntambo’s videowork Paso Doble we are presented with a similar motif, though in this case the male and female characters, denoted via their dress, are locked in this fiery Spanish dance. The camera is mostly trained on their lower bodies as they whip around each other as she resists being tamed by the male character, whose movements seem more certain, less lively. Is she the victim, is he the conqueror and is the dance just a game where the outcome has already been determined?

It is in the context of the paso doble or any classic male-female duet that the dynamic between the genders seems set. The woman is the beautiful, eye-catching object that flits around the stage, while the male figure is a sombre presence who gives a guiding hand to her flights of fancy, her pretence at escape. In this way gender dynamics are embedded in dance, ingrained in the movements of the body in such a way that to be male or female is written into each muscle.

Mntambo tries to unwrite these rules in Paso Doble by conflating the roles. She does this in two ways; the shadows of the two characters which occupy the foreground appear to be fused, forming this peculiar hybrid creature that is constantly changing its appearance as the dancers move across the floor together. Because they are always joined, their limbs become indistinguishable in the shadow. In this way this dark doppelganger becomes the underlying and inescapable truth that they cannot outrun.

The other way in which Mntambo subverts this ingrained male-female dance is by confusing the genders of the dancers. With her shaven head, the female dancer, Dado Masilo, doesn’t appear like a conventional woman and the male figure in trousers is played by Lulu Mlangeni. We only catch sight of her briefly, when she does ground work, but her fine bone structure and small hands give her gender identity away.

On opening night, Masilo and Mlangeni did a live performance of the paso doble, which contributed to the videowork. In particular, it was Masilo’s spirited and perhaps aggressive interpretation of the choreography that suggested the female character she was playing was rebelling against the rules of this predetermined scenario. This isn’t obvious in the video; we can’t hear when she draws breath before she charges towards Mlangeni, nor is her attitude as palatable. The videowork is centred on the garments; the indexes of gender and the dance itself rather than presenting how dancers are able to play within the confines of this dance convention.

In the live performance, each gesture presented space for Masilo to subvert the relational and gender dynamic. We could also clearly see she was locked in an embrace with another woman. This motif is echoed in two sculptural works fashioned from cow-hides that have been moulded into dresses, which are located in the centre of the circular entrance to the main gallery. These aren’t limp garments; they are stiff, cast on a female mannequin so the contours of the buttocks, the frame, are made visible. This makes the female body present but, as the dresses are hollow, its absence is also made obvious.

This is the case with all of Mntambo’s cowhide sculptures. Because the hides allude to both a covering and skin, the medium works well at articulating how the flesh and the outer shell used to clothe it have become intermingled. In this way the dress, the outer covering, becomes inseparable from the body and, like the predefined language of dance in which gender is ingrained, so too does the dress intrinsically inscribe the feminine self onto the body.

Another fusion is evoked; that between the female body and the animal body. This idea is revisited in the videowork and photographs of Mntambo in the attire from the work called Inkunzi Emnyama. Here Mntambo poses in a disused bull ring wearing the outfit of a toreador. Before she enters the ring, however, another garment is strapped onto her. It is a dramatic sculptural cowhide. In this way, when she enters the ring, she is both the beast and its slayer. This rhetorical device recurs in her practice; in the Rape of Europa (2009) the artist is seen posing as the defenceless and nubile Europa as well as her rapist Zeus (disguised as a bull).

This uncanny doubling, where the subject occupies two opposing sides, suggests Mntambo is dealing with an internal conflict; a struggle between the masculine and feminine impulses. In this context the outcome isn’t predetermined as the self is constantly shifting between desiring dominance and craving submission.
The uneasy animal/human motif pushes the dialogue in her work past the female/male dichotomy, evoking the push-pull between nature and culture and the rational and irrational, which feed into a conversation about gender but allow her work to offer a variety of readings. This makes her art intriguing. However, the hair artworks, presenting hair threaded through paper, a new area the artist is exploring, are less successful.

Given this exhibition was part of the presentation of her work as the Standard Bank Young Artist, there was an expectation of new work. Paso Doble is the only work that really lives up to that expectation. In a way this iteration of the exhibition reads more like a mini-retrospective of sorts, making it an ideal opportunity to trace the dominant threads in Mntambo’s practice. - published in The Sunday Independent, June 3, 2012.