What happens when Graffiti becomes art 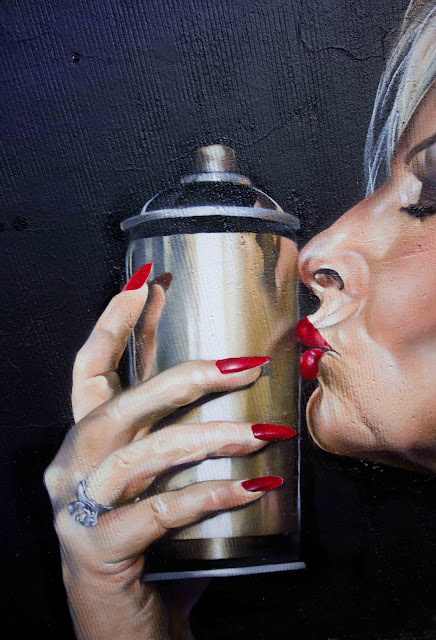 Lazoo, Mak1one, Rasty and Curio are gathered at a wall at the bottom end of Kruger Street in Jeppestown on the eastern-side of Joburg’s inner city. The pavement is littered with spray cans and Mak1one looks like he is wearing a Jackson Pollack canvas. Rasty is balanced on scaffolding and spraying a robot motif. His dreadlocks are twisted around his head, so they don’t get in the way of his work. Curio is leaning on a car across the road.
The wall is only a few blocks away from Maboneng or “Hipsterville” as Rasty dubs it, but it is like another country. The street is lined with panel beaters and establishments selling second-hand car parts. Their services are advertised on modest hand-painted signs. The area is dotted with dilapidated and vacant buildings so it’s the kind of territory that would have graffiti artists reaching for cans of spray-paint. An engineering firm has, however, agreed to let the group loose on the exterior wall of their property, so they won’t have to “bomb” it.

“Bombing” is a term used to describe illegal graffiti work that is usually done under the cloak of night, away from prying eyes, witnesses. Speed is essential to bombing. You have to work fast and without much light. It is only when the sun comes up that the artwork is revealed – and then sometimes reviled. Historically, graffiti has been viewed as an incursion, a violation of the urban landscape and public space. To some degree, the graffiti community has accepted and even perpetuated this view of their activities – “bombing” implies a violent and destructive act.
Usually the perpetrator of a bombing would be unknown – at least to the greater public. However, within the once tight and secretive world of urban artists, their identity would be as plain as day. Their work wouldn’t only bear their street moniker, or tag, but each artist has their own signature style.
For 16 years, Curio has been spraying his nom de plume around Joburg. Since he started doing it in parking lots outside nightclubs, the rendering of the letters has become more elaborate, stylised and artistic.
“Sometimes I add another letter, sometimes I jumble the letters. I just keep playing with my name. I am just addicted to bold letters on a wall,” the thirtysomething reluctantly explains. “It means nothing,” he assures, yet this repetitive primal act seems so unlikely from someone like Curio. He parades a “Gangsta” street-look – one of the legs of his trousers is pushed up over his knee to reveal a naked leg – but he is a retiring personality.

I gather that Curio, Rasty and the other artists haven’t “bombed” in awhile. Though their exchanges are peppered with this street term, all are professional graffiti or street artists who make a living from doing commissioned work in their home towns and cities around the world. The advent of the internet has substantially contributed towards its commercialisation. Their work can be seen by anyone now, allowing artists to become minor celebrities who move from town to town, leaving temporary imprints. The work on the wall in Jeppestown will form part of the display for the City of Gold, Urban Arts Festival that Rasty initiated last year. Sponsors, like the Goethe Institut, have supported the event by flying in German street artists Case, Tasso and Atom.

All the artists go by their street monikers – it’s even on their business cards. The fact that they have business cards substantiates how this craft has come of age and become a commercialised, respectable pursuit. Despite this, like Curio, they still exude a street vibe; they wear trainers, T-shirts and caps, but mostly they are middle-aged professionals who live in suburbia. They don’t pretend otherwise. In fact, Tasso is delighted that graffiti art and its progenitors are gradually being absorbed into the mainstream. It means this art form has matured. It’s no longer the domain of angry teenagers who spew their vitriolic attacks on society onto unsuspecting walls. Graffiti art has become a decent way to make a living.Tasso recounts with pride how, at an exhibition in Germany, a respected professor of fine art singled his work out and spoke favourably of it. He puts his hands to his cheeks as he recalls how the incident made him blush.

Tasso came to graffiti late – he was 25. Ensconced in a rural hamlet in East Germany, he had to wait for the Berlin Wall to fall before he could get his hands on cans of spray paint. It took him a while to perfect the craft. There are no graffiti courses, so aspiring artists have to learn on the street.
“People thought I was gay, because I kept hanging around with 15-year-old boys on BMXs. But I was learning from them how to do it. They had all day to paint. I was working.”

Tasso’s art is figurative with a high degree of what they term in graffiti circles as photo-realism; his rendering of the tones of the human skin is lifelike. This kind of work is pedestrian on a conventional canvas – its ubiquitous in mall galleries. Tasso admits he was bored painting on canvases. The photo-realism approach has a different kind of gravitas when it is fixed to a wall in a public space. It’s not just the uneven textures that impart interest; in these contexts it challenges narrow definitions of graffiti and inserts art into the landscape so that it becomes part of the urban fabric while redefining its character.

Tasso’s work is laced with macabre twists. He is fixated with eyes; they are mostly oversized and glare out from walls, implying that passersby are being scrutinised by Big Brother. The eyes convey traumatised subjects, evoking the alienation and burdens that mark a fast-paced urban existence. Most often, however, graffiti art is self-referential.

One of the works Tasso has left behind on a wall near Jeppestown is of a blonde, middle-aged woman kissing a spray can. It’s an irreverent nod to the manner in which graffiti has become embraced by the middle-classes – if not practised by them. Located in an area of urban degeneration that is near the aggressive gentrification scheme that property developer Jonathan Liebmann has named “Maboneng”, the work evokes the love-hate relationship the moneyed classes have with street-culture.

The group work that Lazoo, Rasty, Tasso and Mak1one are creating on Kruger Street also makes a wry reference to graffiti’s ambiguous status as a tool of regeneration, though it has historically been associated with urban degeneration. The artwork, which stretches along two walls, maps the creation of a man-made superhero, a toy dubbed Mr Vandal. On one side of the wall, we see each of his body parts embedded in a plastic frame – like an assemble-it toy. On the other side, a fully formed Mr Vandal has taken over the city and is spewing paint over the environment.

The art work presents the contradiction that has become inherent to this form; established graffiti artists are constantly trying to re-determine perceptions about the practice but, at the same time, they acknowledge that if it becomes too middle-class, too institutionalised, it loses its unique character and the thrill attached to it.

This contradiction or friction within the practice of graffiti or street art – graffiti is a kind of outmoded term – plays out most obviously in opposing attitudes towards its inclusion in conventional art scenes. That the City of Gold, Urban Arts Festival included an exhibition at the Afronova Gallery in Braamfontein suggests the move to legitimise street art is tied to its amalgamation into this realm. Some of the artworks at this exhibition – like Atom’s – simply look as if chunks of wall have been neatly cut out and plastered onto a canvas. Others look like conventional artworks – such as Case’s painting of a girl wearing a mask, or Tasso’s monochromatic paintings of train-tracks. Okuda, a Spanish street artist, presents photographs of naked women wrapped in barricade tape. The street, the urban environment is referenced in all the works but it’s not street art.

Curio isn’t showing any work at the exhibition and doesn’t aspire to be part of the art scene. “I am not a fine artist. I can’t paint with a brush. I am not going to change to be part of that world. It’s better to stick to what you are doing,” he says. SoloOne is of the same thinking – he believes street art should remain on the street. The nature of the work is stifled in the gallery context, asserts the late thirtysomething British street artist, who has been developing a so-called outdoor street art gallery in a disused ball court in an estate in South London.
“When you put work on canvases, you are selling a product. I would rather be making work on the street. The street is my gallery. People shouldn’t have to go indoors to see my work. Street artists will risk losing where they come from,” says SoloOne. His nom de plume was derived from the 1970s TV show but it also spoke to his nature as a loner.

In the past he has taken on corporate commissions from Nike, adidas and the like, but he has come to eschew the commercialisation of street art. He prefers to generate an income from running street art workshops for troubled kids in London’s inner city. For Lazoo, a French street artist aligned to the Mac crew, being part of the contemporary art scene is a natural step in the progression of being a street artist – and settling into domesticity.
“I’m too old to be wandering around the world and going to out-of-the-way places to do art. I have a family that I need to support.”
In SA where street art is still in its nascence – it took off in Cape Town only in the late Eighties – only a handful of artists have turned professional. Hakone and Rekzo, who have also been commissioned to decorate a wall in Braamfontein as part of the festival, are part of a community of street artists who work as  designers by day. They enjoy the scale and artistic freedom that street art presents.

Hakone is Soweto-based but prefers leaving his mark in rural areas, like on traditional thatched rondavals where people would least expect to see the urban art form. SoloOne derives pleasure from working on the street, not only because the outdoor environment provides inspiring and challenging canvases for his work, but the level of interaction with passersby that legitimised work affords. Over the three days that he sprayed a freeform bold insect-like design on a wall flanking the Queen Elizabeth Bridge in Braamfontein, he met people from Lesotho and Zimbabwe.

Street art smooths conversations between strangers. As Rasty and Mak1one put the finishing touches to Mr Vandal, a small crowd of people collect. A mechanic in soiled blue overalls, a middle-aged passer-by and a local Greek business owner are standing on the pavement discussing the art work and watching  it take shape. A business owner from across the street stops his 4X4 near the pavement to tell Rasty how much he likes the work.

Creating street art has become a live performance of sorts. It’s no longer underground. Perhaps nothing is anymore. And while practitioners of street art celebrate that their activity has become legitimised, a nostalgia for its dark, clandestine origins persists. The desire to slip into the dark of night and bomb a wall never completely vanishes. - published in The Sunday Independent newspaper, April 29, 2012 (The photograph above is work by Tasso and was taken by Derek Smith)
Posted by Mary Corrigall at 9:04 AM