On the surface: Busuttil & Poynton 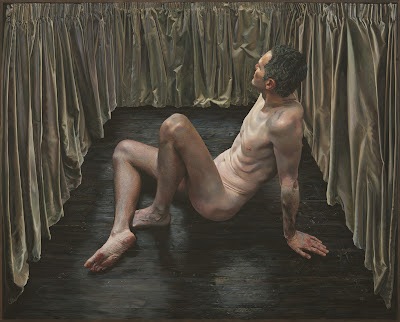 Carla Busuttil’s paintings don’t conform to this new aesthetic that is privileging form over substance, which seems to be gaining traction in local art circles. For starters, her work is not abstract; it’s semi-figurative. Nevertheless she, too, is playing with form, embracing a kind of naïve style of painting that has a (purposively) childlike quality. There is a kind of vibrancy, confidence, and daring to the style of painting at her exhibition, Exit Mode. You can see that her body is driving each brush stroke. Her cheeky art is as much a gestural retort as it is a visual one. It’s as if she has stormed the citadel of Western art and is pushing her way through the pretence and the preciousness associated with painting. The mood is rebellious and extremely playful, though the subject-matter is dark. Very dark.

Busuttil aspires to this anti-conceptualist movement; she doesn’t want to make art that is driven by ideas. “Content is secondary,” asserts the artist in her statement. But there is logic, a theme even, that guides the unnerving group of portraits she presents. The work is united by a common source: photographs depicting images of trauma, war and conflict. She works with them intuitively, producing deformed, lopsided faces with blurred, smudged and indistinct features. Her subjects look battered and bruised; as if a tanker has driven over them and squished their insides. This description suits the childlike crudeness of her rendering; her work is almost cartoonish in this sense. It’s the invisible mark of trauma that she wishes to extract as she pushes her brush across the canvas, bringing to life the dysfunctional, damaged psyches that belie the faces in the photographs she collects.

Just as she observes that she can consume images of violence with ease, so too is her translation of them uncomplicated, rudimentary. Her paintings are not quite fast-food for the eye; there is a lingering terror, horror, in them that denies pleasure, though the macabre sense of humour that laces them provokes a smile. A work entitled Ooooo, reads like a parody of Edvard Munch’s The Scream (1893). A mouth sits agape in the middle of a blue blob in the vague shape of a human head. In her attempt to capture the unseen nature of violence, she seems to have arrived at the conclusion that it is beyond her skills; the end result can only be a mockery, a sham. She is unwilling to “honour” the source of her work, preferring to deride the stock of photography that is meant to document conflict. She acknowledges that photography is limited too and photographers’ drive to expose violence, ironically, smoothes the path to our acceptance of it.

Even though she presents work that appears superficial, one-dimensional, it never quite lives up to the level of vacuity to which she aspires. The form of her work is driven by the content. Nevertheless, her paintings can be consumed quickly. There are no details, no truths that slowly unfurl in the mind as you view them. There is no need to linger in front of them, which is why she offers so many for us to see. As we move quickly from canvas to canvas, amused and entertained rather than repulsed she makes us complicit in this obsessive and twisted fascination for violence.

In contrast the paintings at Deborah Poynton’s exhibition, Land of the Cockaigne need time to digest. It’s not just the scale of them that demands your undivided attention but the dense level of detail – every vein and blemish on her subject’s skin is rendered with a high degree of realism. So while Busuttil rages against the tradition of painting, offering a sort of short-hand, Poynton digs into its origins, harnessing its illusionary properties. The profusion of detail suggests there is a hidden mystery locked within Poynton’s paintings in much the same way as Flemish painting from the 1400s. Your gaze is sustained by the details in the belief that a world within it will open up.

The Flemish connection isn’t accidental; Pieter Bruegel also made a painting of the same title, which articulated a lack of spiritual fulfilment. Poynton juxtaposes two kinds of imagery; lush, bountiful natural scenes – a thick forest, sea water bubbling in a cove and a garden bursting with brightly coloured flowers – with naked men and women. The differences between the two is stark; the natural settings are quite beautiful, pleasing to the eye and abundant in contrast to the sparse naked bodies which inhabit darkened bedrooms, or a barren wooden floor.

Some of these subjects are pictured in intimate settings; their bedrooms. This is a recurring background in Poynton’s art. The bedrooms are always messy and rendered in muted brown tones. These could be post-coital scenes; the nakedness and the ruffled bed covers and sheets imply as much. However, the subjects are almost always alone, and there is a sense that whatever activity may have occurred and pleasure it afforded, is fleeting. Undoubtedly, there is no post-coital afterglow in their expressions. It’s not loneliness or the transience of intimacy that haunts her subjects, rather it is in these intimate spaces, where the layers of pretence have been stripped away, that they are forced to confront themselves and a persistent, gaping yearning that can never be satiated.

The abundant natural landscapes that cover every inch of the large canvases are the counterpoint and the answer to the unfulfilled longing that dominates the portraits; as they seem guaranteed to induce pleasure. These scenes suffer from overabundance. They might be natural settings but they are so spectacular they could only be contrived. They are pure eye-candy, an hallucination almost, though they appear so life-like. This is precisely where Poynton exploits her quasi-renaissance style of painting; the fantasy looks as real and convincing as the reality. In this way the “reality” is shown to be as unstable, and contrived. Both scenarios are equally compelling, accentuating the emptiness in one instance and the abundance in another. But, ultimately, in their own way they both express a kind of vacuum as they lead us nowhere. So while Poynton’s method contrasts with Busuttil’s she, too, sets out to articulate a lack of substance, or perhaps absence is a better word for it.
Poynton suggests it’s the high degree of realism that forces us to arrive at this point. “The more we try to define something, either literally or figuratively, the faster it seems to elude our grasp,” she says. - published in The Sunday Independent, May 06, 2012
Posted by Mary Corrigall at 9:10 AM