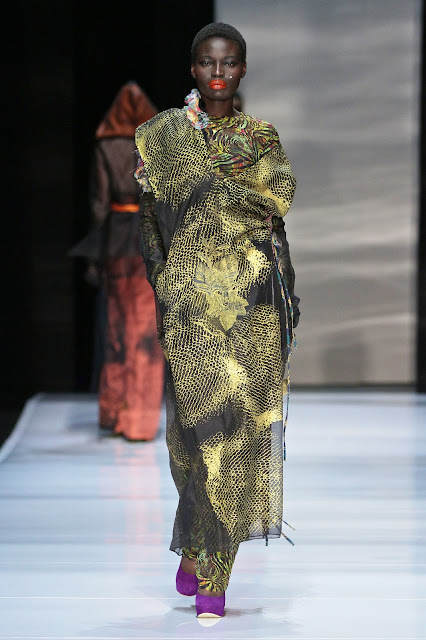 When I find Clive Rundle in his Doornfontein workroom he is poring over a book on Steven Cohen, the France-based South African performance artist famed for wearing chandeliers and teetering half-naked on impossible stilettos in incongruent settings. Willing to take garments and accessories beyond their function, Cohen is the extreme fashion horse. Maybe an ideal one for some of Rundle's creations. The affinity between the two artists is real: Cohen has travelled the world with Rundle garments packed in his suitcase.

The image that Rundle is transfixed by is a close-up of Cohen from his Golgotha performance. Cohen's face is covered in make-up and moth and butterfly wings are fanned around it. He looks like an exotic creature from the domain of fantasy. I assume Rundle will be taking inspiration from the make-up for his upcoming SA Fashion Week (SAFW) collection but he later reveals that it is an area absent of adornment that holds his attention: the centre of Cohen's forehead covered in white paint - "it's as if part of his face, his skin has been erased", marvels the fifty-something fashion designer, studying the image through his oversized glasses. This act of erasure links up with the theme for his SAFW show: fragility. Or "Fr-agility" as he sometimes refers to it, placing emphasis on "agility."

Rundle had already settled on the theme a month earlier when I made my first visit to his studio. A number of adjectives and nouns - such as "fault lines" - alluding to the state of fragility were listed on a piece of paper stuck to a mood-board in the making. Rundle hasn't ever constructed one of these. He hasn't needed to keep track of the mood of his show with fabric swatches and an array of images summoning a particular theme. Until now he has held ideas in his head before delicately transferring them into the real world. "Sometimes a mood can be supplied in hindsight," he says.

Putting up a mood board is one of the many new processes the designer is embracing since Anne Chapelle, the Belgian fashion patron who steered Ann Demeulemeester towards financial success, spent a few weeks with him last year. She was here to share her fashion business-savvy with a view to guiding Rundle's business into a new era, which could see him exporting off-the-peg collections to Europe. Rundle is not exactly known for off-the-peg clothing in his native city of Joburg, though at the height of his retail, success - in the late eighties, early nineties - he did a booming trade from his Rosebank shop. His clothing, then, wasn't exactly off-the-peg stuff. With its white walls the shop was like an art gallery, the clothing, the art.

His new shop in The Firs doesn't look like a white cube but it isn't stocked with ordinary off-the-peg products. The garments are highly labour-intensive items that evince his characteristic impulse to challenge the fashion system. Like a top made almost entirely from zips. As Chapelle suggested, such items aren't accessible to the ordinary fashionista. It's not just the hefty price tag that is a barrier but the kind of mindset required to slip into a Rundle number. In an age in which uniformity has become de rigueur in fashion, the value of one-offs have been undermined. It's a movement engendered by global retail chains. Cheap, generic garments are consumed quickly and discarded as speedily as the fashion cycle turns, though Li Edelkoort, the fashion forecaster, reckons a backlash is in the offing.

Rundle has been swimming against the stream. "I don't like fashion," he quips with a grin. "I am discovering more and more that my medium is the body and that I am not a fashion designer. Yes, the clothes fit and they have armholes, and they are functional?" He doesn't finish his sentence. And maybe he can't. He can't verbalise what territory his work inhabits. He operates in the interstices between design and art, commerce and abstraction. This outlook is part of the attraction of his clothing.

His garments are not trend-oriented items so they are never "out of fashion". For Rundle the show is the ultimate platform for the kind of work that he does. Every element becomes mobilised in the pursuit of a particular visual and emotional encounter. His 2010 Winter collection at SAFW was inspired by Braille. It challenged the notion of fashion as a visual language. It was a tactile collection in which he exploited and contrasted fabrics with different surface textures created by hand embroidery, embossing, intricate pleating and hand stitching to create a fashion lexicon designed for the fingertips instead of the eyes. By the time the show concluded it was a rude awakening to be delivered at the door of reality once again.

Mbuyi Malo, who joined Rundle's business in 2007, suggests that Rundle's process recalls the duality in Alice in Wonderland. "His show collections take you to this surreal place."
In everyday life you can recognise elements of his design, he says. Like the way the twins in the underworld are a distorted mirror of the twins in the reality Alice is rooted in. If Rundle is to thrive he will have to allow the two worlds - the fantasy and reality - to meet.

"I'll take a few steps closer and my customers will have to take a few steps to meet me," he suggests, as he contemplates the ready-to-wear collection for SAFW. Chapelle's visit and support has prompted the birth of CNC, the name of the ready-to-wear off-shoot of Rundle's couture label. A month before the showing, Rundle and Malo are expecting to launch it alongside the couture collection. It has also been decided that Malo will design and project manage CNC's debut. This way Rundle will be able to remain inside his creative idyll and pursue his non-fashion fashion - Chapelle was clear: "you must leave the madness alone". It's an ideal arrangement because Malo has an in-depth understanding of Rundle's aesthetic, while at the same time seems to have a much more commercial outlook.

For starters, he places less importance on the show, viewing it is as just one aspect of their work. He is more concerned with what happens after the show.
"The idea (driving) the show, must live after it. So the show is good and you produce this strong thing but it's about the ongoing relationship with customers. If you have nothing to really offer them after the show then you have abandoned that audience," says Malo.|Being in touch with the needs and lifestyles of that audience is of prime importance to Malo too.
"Will someone on the street be wearing our clothing? The world you are living in is important. In the fantastic-ness of the idea you need to include people and let them have access into the idea."

Malo might have a very clear idea of the objectives of CNC but exactly how the collection will be realised is murky. Three weeks before SAFW samples of this new range are yet to surface; Malo has sketches but he is hesitant. He is waiting to take his cue from Rundle's couture collection. Only a few pieces of it are hanging in rails in the cavernous workroom - white skirts fashioned from men's shirts. The sleeves are like sculptural gussets as the cuffs point to the ground. It's a typical quirky Rundle design but how can it translate into a ready-to-wear garment? "Is it just a full skirt? What's that, it's nothing," remarks Rundle, meditating on the ordinariness a diffusion garment of his couture number would look.

He is excited about his new collection - he has designed a complex scarf that wraps around the body like a harness - but the CNC range is weighing heavily on him. I suspect he is resisting the process though he acknowledges it's a necessity. "Being commercial was never our selling point. It's our strong aesthetic that makes us noticeable. Nobody looks at a designer's work and thinks let's help them become artistic," he says bitterly.
"Fragile is a good theme for this show," he concludes. Malo concurs.
"I can feel it, this is the first time dealing with something new. There is a long history to consider and a potential future. How do you do it? You have to break yourself apart and see what happens."

Days later, Rundle calls to say they have decided not to show the CNC collection at SAFW. It's premature, the collection needs time to evolve, he suggests. It's not a complete surprise. It was hard to imagine a pair of ordinary palazzo pants, like the ones I had seen in Malo's sketches, moving down the runway at a Rundle show - though this is the future.

Rundle and Malo's struggle to settle on the nature of their ready-to-wear is a dilemma facing a number of South African designers as the industry matures and everyone is beginning to figure out that while all these fashion weeks have put their names on the fashion map, they need to cash in on that status if they are to flourish. For years, David Tlale has threatened to unleash a ready-to-wear collection, and while such items have filtered into his showrooms and store it was only this year at Mercedes-Benz Fashion Week Joburg that he made public his acquiescence by showing a collection of off-the-peg wear. With high rentals for his store in the Michelangelo Towers Mall in Sandton it was probably a case of do or die. Over the years there have been rumours of his financial troubles. The result, however, was a wearable collection that didn't disappoint, proving that designers can find a middle ground between the drama and commercial requirements.
"It is the next step for every designer," observes Malo, "you have to reconcile your aesthetic with the end customer. Everybody will go about it their own way."

Rundle and Malo will arrive at that place but it will have to be one that will accommodate Rundle's ingenuity and Malo's determination to allow "people on the street" access to Rundle's art. A week before fashion week, the duo are merrily working on the couture collection. Fabric with a barbed-wire print has arrived back from the printers and is strewn everywhere. Rundle is excited, darting around the factory picking up half-finished garments.
There is a black and white organza jacket with pockets protruding from the hem. Brightly coloured asymmetrical dresses come alive when he pulls on the cord that rouches them on one side. He pulls out coloured cottons of polka dot and other prints. They will become "obis", traditional Japanese sashes tied tightly just over the bust line.

Rundle isn't sure what the end result of these ideas will be; at this point he is loosely holding onto a number of visual couplings that only ever really meld or solidify during a fitting or even in the last moments before the models hit the ramp. "Everything is speculative at this moment. It's like a stylist's dream," he says.  It's a dream that will eventually be translated into reality. That is after Malo analyses the final exhibition and draws elements from it and fuses them into the first CNC collection, to sell in the shop, which has gradually been undergoing a transformation to prepare for a new era. It won't be easy; Rundle trades in abstract ideas, he is drawn to the intangible. Like the "absent" space on Cohen's head that holds so much significance for him. This interest can never be channelled into an easily consumable product. - published in The Sunday Independent, April 01, 2012 (photo courtesy SDR Photo by Simon Deiner)
Posted by Mary Corrigall at 9:23 AM