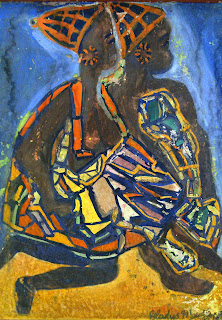 Articles have recently appeared in the press hailing Thandi Sibisi as the first black female gallerist. This following the opening of her new gallery in Melrose Arch.  Media people are eager to declare (or regurgitate) “firsts”; it obviously has a newsy ring but it gives them this sense that they are not only witnesses to history but integral in cementing it. These historical landmarks shift the course of history; erasing everything that came before and colouring all that follows.

In other words it has ramifications for how history is written and read. Proclaiming that an individual is “the first” to attain something in a field, particularly when their race or gender underpins that achievement, emphasises this aspect of their profile, though ironically their accomplishment is supposed to be evidence that they have overcome the limits associated with their identity. In this way their achievements are always attached to their profile rather than the merit of their contribution.

In 1961 Gladys “Nomfanekiso” Mgudlandlu was proclaimed to be the first African woman to have exhibited her art. She earned this appellation after showing a collection of artworks in the board room belonging to Contact, a liberal political magazine based in Cape Town. This ensured that this exhibition became a landmark in the mythologising of this artist, though it was later proved that, in fact, Mgudlandlu wasn’t the first – Valerie Desmore should have taken that honour. So why was Mgudlandlu hailed as a pioneer and not Desmore?

This is one of many questions that Nontobeko Ntombela, the curator of A Fragile Archive, raises. A recorded interview with Randolph Vigne, a member of the breakaway liberal party called the National Committee for Liberation (NCL), later known as the African Resistance Movement (Arm) and the man thought to have “discovered” Mgudlandlu, which forms part of the display, offers much insight into her fame and position in history.

Vigne confesses he wasn’t an expert on art – this may account for his lack of awareness not only of Desmore but perhaps a tradition of female black artists which stretches back in time. When Vigne first saw Mgudlandlu’s art he understood it in relationship to the “Grandma Moses” phenomenon – this refers to a self-taught artist whose naïve works went from being displayed in a pharmacy to the Museum of Modern Art in New York under the rubric of “contemporary painting”. Vigne also mentions that “primitive” art was popular at the time, though he now confesses that that term may have been inappropriate.

A small collection of Desmore’s art shows her to be a versatile artist; her work ranges from the figurative to an expressive style. To be frank, she appears to be a more sophisticated and technically astute artist than Mgudlandlu. In other words, her work didn’t evoke that “primitive” style. So it seems that Vigne and the coterie of Mgudlandlu’s supporters had preconceived ideas about the kind of art black artists should be producing.

Adding to this thinking must have been Vigne’s own political agenda; proclaiming the brilliance of a black artist must have served his desire to assert his liberal outlook well. In an attempt to tease out the nexus of socio-political drivers underpinning this exhibition, Ntombela recreates this legendary show. Not all the works from that exhibition are available for display but these absences are part of the exhibition, allowing the curator to make her research process transparent.

The paintings that are within her grasp are like silent purveyors, seemingly vulnerable to any viewer’s readings. The often conflicting historical information swirling around them makes it difficult to interpret them independently. What happens when you remove that scaffolding? Is Mgudlandlu’s work still relevant?

Mgudlandlu denied that terms such as “abstract” applied to her art; she believed she was working in a realist mode. Her works deny this assertion. Warriors (1961), presents interlocked coloured geometric shapes that one assumes are stylised renderings of shields, thereby evoking a modernist language. The Fall summons a primitivist-like impulse, particularly with the two naïve renderings of naked figures in the foreground. They are surrounded by an unidentifiable mass of colour – the natural environment perhaps?

Portraits of figures in traditional garb executed in 1964 read like drawings by a self-taught artist with little grasp of rudimentary representational devices. However, it is the unconventional perspectives, and the rescaling of natural elements that make some of her images so compelling.
Ntombela believes that as Mgudlandlu was an art teacher at a school, she would have been aware of Western traditions in painting. The late art critic and academic, Neville Dubow, apparently suggested that Mgudlandlu’s work shared similarities with that of Irma Stern. Is it possible that Mgudlandlu appropriated the primitivist approach? While Bessie Head criticised her work, implying it was escapist fluff, in a recent panel discussion Pumla Gqola|apparently suggested the recurrent land motif carried political resonances.

Those who chronicled her ascent appear to us now as unreliable witnesses. In one newspaper article Mgudlandlu is represented as a beer-swilling township dweller who entered a trance-like state when she made work – “my mind just goes round like a wheel”, she is quoted as saying. Such reports make clear that whatever interpretations we arrive at now, are probably more of a reflection of our own times than the art itself.

Undoubtedly, this exhibition is the result of a young curator’s struggle with the archive – the silence, gaps and contradictions. Instead of trying to resolve these issues, she lays them bare and leaves it up to us to decide. Some might read this as a cop-out; others will celebrate her determination to embrace the ambiguity inherent in her subject. - published in The Sunday Independent, March 4, 2012.
Posted by Mary Corrigall at 10:44 PM