In defence of Painting 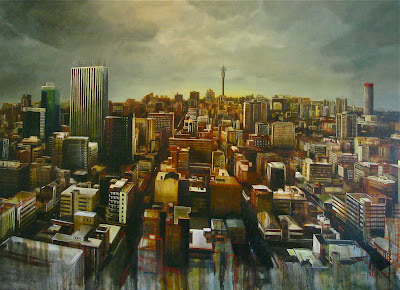 It’s called A Case for Painting (2011) and features a young woman about to pry open a case that presumably contains tubes of paint. Colour has yet to be unleashed, so the canvas is black with a few white brushstrokes alluding to it being an unfinished work, a hesitant gesture even. The title of Claire Gavronsky’s irreverent painting is a play on words that evokes the historical baggage that accompanies painting but also the question that every artist is forced to ask before they pick up a paint brush: do I need to say this with paint?

With such an array of mediums and forms now viewed as legitimate conduits for expression, it seems artists cannot simply acquiesce to an intuitive desire to work with this medium without being able to justify it conceptually.

In Immaterial Matters, all the painted works make wry reference to the history of Western art, which immediately substantiates the artists' use of paint.   Rosenclaire – an artistic duo made up of Rose Shakinovsky and Claire Gavronsky –  are females so using this medium has gendered significance too: it was once the preserve of men.

L’avanguardia non si arrende mai (the avante garde never gives up) contains the figure of a young girl in period dress which suggests she hails from an historical work. A faint dark line over her upper lip, suggesting a moustache, recalls Salvador  Dali’s signature feature. Once again the canvas is black, disconnecting the subject from its historical context. It appears like a blackboard, and with white writing it implies the work is part of a “lesson”. This type of painting is thus instructive about the past, a dialogue, a response. Because of this its existence does not require “a defence.”

The title of their exhibition, Immaterial Matters, is another irreverent double play on words, which implies that the materials of a work shouldn’t carry such significance, historical or ideological, but  it also advances the idea that that which is seen and is tangible is less significant than what is unspoken, invisible. In this way they point to the process that occurs when the viewer looks at an art work and interprets meaning.

Reader Orientation (2010), an installation which presents a miniature plastic cow staring at a large dice, hints at the difficulties in this process – if you view the cow as the viewer and the dice as the work of art. Even if both are deemed to be the latter, the sense of interchangeability of meaning reflects on the ambigious process that underpins viewing - and interpretation.

A reverse process occurs in Hermann Niebuhr’s exhibition City Chromatic, an exhibition where the artist seems only interested in the visible. Every painting is an attempt to describe Joburg’s city skyline. Niebuhr approaches his muse from almost every angle – a number of titles fix the position of his gaze.
The thoroughness not only of his representational renderings, which evoke a realist mode, but the angles and times of day, seasons, at which he chooses to revisit his subject, hint at a scientific, rationalist approach. Like studying a specimen under a variety of conditions.

Niebuhr is in fact mapping the surface of Joburg. The “surface” here refers to the uppermost layer, the glitzy, mirrored buildings and structures that give Joburg its identifiable (physical) character. Inhabitants do not get to experience this side of the city, except from viewing aerial photographs or the like that might appear in postcards promulgating an idealised view of the city. It is this view that suggests the city’s potential – its status is embodied in the tall buildings.

The question must be: why has Niebuhr painted the city from this vantage point when  there is an excess of imagery offering this point of view? Of course, this is a reminder that this city has become a fetish object.   The most significant reason for Niebuhr’s study – it is too detailed and thorough to be anything but – is that his obsessive interest in the “surface” of the city can only be enacted through a drawn-out and meticulous process of representation. Painting also presents the room to challenge the very surface that holds his attention. A number of his paintings suggest a desire to destroy and erode it – interestingly, Rosenclaire’s art-making begins at a point in which they take for granted this has already occurred.

As such, while Niebuhr presents these picturesque cityscapes, the dripped painting technique which he applies in a number of works implies a degradation of the surface, not just the painterly one but the architectural structure of the city. In some paintings, the dripped effect recalls rust – associated with dilapidation.

Because Niebuhr’s gaze is focused above ground level, he presents an unoccupied city. In this way he sidesteps the discourses around the inner city that have held the attention of other documenters – Guy Tillim, David Goldblatt and Andrew Tshanbangu. Nevertheless, the persistent degradation speaks not only to the idea that the inner city has been (and is going) through a cycle of decline, but implies a desire to peel back and see what lies beneath the surface. The sociopolitical aspect has been obviated in favour of a study of form, reaching towards a deconstruction of the physical character of the city.

Works like Colour Grid, which reduce the shapes of buildings to abstract patterns, is evidence of this, but Niebuhr is unwilling to move fully into abstraction. He is far too enthralled by his muse; his larger canvases are devoted to creating an immersive experience for viewers, creating the illusion that this view of the city from above is always within our reach.

There is no irony present in Niebuhr’s study. His self-consciousness is related to form.  This is in contrast to Rosenclaire’s attitude towards painting, which they see more as an act of erasure than construction - seeing as everything has been painted before.  - published in The Sunday Independent, March 18, 2012
Posted by Mary Corrigall at 10:30 PM