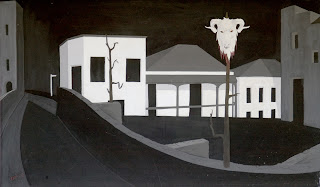 The cultural anthropologist Victor Turner proposed that artists are, by nature, “edgemen” or, from a less gender-biased point of view: “threshold people”, which he defines as those persons that “elude or slip through the network of classifications that normally locate states and positions in cultural space”. Artists need to be outsiders because it is this threshold status that enables them to make art, he advances. Undoubtedly, the artist as an outsider has become an integral part of that identity but one is never sure whether artists simply chose that position because it has become ingrained or whether their activities naturally propel them to the edges. The lone-artist toiling on the fringes of society looms large as a romantic figure in biographies and monographs; it contributes to this notion of them as tortured beings.

Fred Page appears to be the ultimate “edgeman”; not only is he said to be a social recluse but he seems to sit on the periphery of the society that should have claimed him: the South African art world. Jeanne Wright, the co-author of Fred Page: Ringmaster of the Imagination, advances a number of reasons for this. After coming to art late in life – he began his studies in his late thirties – he never pursued academic studies in this field. Instead he attended the Port Elizabeth school of Arts and Crafts, which offered technical training. The authors make frequent reference to his non-intellectual approach, which they suggest in parts limited his work both visually and conceptually. This inadequacy might account for the quasi surrealistic mode he adopted which they assert was quite out of sync with the kind of art being made in South Africa (and abroad) during the ’50s to late ’70s.

Based on the breadth of images in this substantial monograph it is clear that after Page had settled into his almost monochromatic stylised surrealist aesthetic, his work didn’t develop or evolve much, either thematically or visually. The authors don’t raise this point – they choose to dwell on his status as a “non-intellectual” artist, referring to the fact that he concentrated on the formal arrangements  of his art rather than its theoretical underpinnings. They also intimate that Page’s process was intuitive; that it wasn’t ordered to express any preconceived ideas. In this way it is implied that his art making was informed by a kind of naivety.


It is suggested that the “non-intellectual” attribute of his work impedes analysis. Contributing to this were the artist’s own assertions that there are “no deep meanings” in his work. Page’s observation is given prominence in the preface to the book, implying that it provided a compass of sorts. Undoubtedly there is a sense that this view has overshadowed or hampered Wright’s efforts at penetrating the work; she resists interpretation, which may have lead to “intellectualising” aspects of his oeuvre.

Certainly she avoids any close readings of his paintings. Much time is spent unpacking his work’s formal qualities and its relationship to movements outside of South Africa. In particular, Wright points to a group of post-war British artists which included John Piper. It is a pity that there are no reproductions of those artists’ works in the book, which could help readers make the visual connections.

That Page drew inspiration from this period is significant; you can’t help wondering what parallels these post-apocalyptic like scenes of bombed-out buildings might have shared with the conditions in South Africa or why they resonated with Page. Wright resists a socio-political reading. Page’s affinity with the surrealist movement is also touched on, but as with the former art historical link it isn’t probed with any depth. Presumably, this was a deliberate decision to ensure that the book might appeal to a wide|audience who might not be interested in art historical details.

The connections might be superficially explored but they allow Wright to position Page’s work, something it seems that was to a large degree denied during his lifetime. Fixing him within these European art narratives and in the Port Elizabeth art scene (as limited as it was, and is) also works at countering the stereotypical notion of him as this artistic “island” – this kind of self-sufficient autodidact.

Of course, as Wright intimates, these links weren’t substantial enough to guarantee his admittance into the international art scene, though he exhibited in a London gallery in the early Sixties. His nationality was the main hindrance, asserts Wright. Though, of course, perhaps this non-intellectual aspect to his work, which Wright reiterates, might have also stood in his way.

Ever the detached chronicler, Wright largely looks to other writers and critics from his era in an attempt to unpack the haunting, surreal monochromatic imagery that defined Page’s art. These insights range from the poetic – “He used his brush to photograph ghosts” – to more incisive views. Nicholas Slabbert, a writer who lived with Page for some time, proposed that the “clarity of the geometrical design” in his art worked at distilling the “ethos of human finiteness”. Few postulations about his work are tested in relationship to specific artworks.

Page was happy to discuss his work with visitors at his studio but he avoided analysing or interpreting it, according to Wright, engendering the notion that it was far too complex or furtive for a topic of discussion. Because Wright resists to do the same, this book doesn’t “penetrate” the work – it is more of a comprehensive guide about his career and the themes in his work.

This may be a result of the authors’ intention to appeal to an audience unconcerned with specificities and details but I suspect it has more to do with Page’s own deprecating view that his work wasn’t the subject of intellectual debate. As an adamant follower of Freud’s theories about the subconscious, Page would have been well aware that no gesture was accidental.

Wright implies throughout that the ideas driving his works were so deeply personal that Page simply refused to share them, ensuring that his solipsistic world remained intact. In this way, his “edgeman” status would be secured long after his death. - published in The Sunday Independent, February 19, 2012
Posted by Mary Corrigall at 10:39 PM