Sabelo Mlangeni challenges the notion that homosexuality is 'un-African' 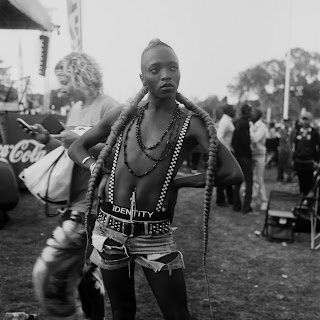 The gender-bender activities during Pride marches used to shock the establishment. Men dressed in OTT drag outfits garnered attention and cemented this annual event’s high profile in the pages of newspapers. Now this kind of imagery has been co-opted as a stable element of our culture, and participating in these events has become a legitimised rite of passage for men and women looking to publicly declare – and claim – their sexuality.

In Black Men in Dress and Iimbali, photographer Sabelo Mlangeni does something radical with this field – shall we call it – of imagery. His subversion isn’t necessary deliberate nor does it altogether manifest in the images themselves. By shooting in black and white he does suppress the inherent “spectacle” or gaudiness associated with this brand of imagery. He has a good reason for doing so; the garish tones of the costumes that men typically wear during a Pride march accentuate the artificiality of the female mask they have appropriated. It’s a cheeky way of reminding everyone that gender is a construction, a theatrical masquerade.

Mlangeni wants to minimise this aspect because he seems interested in emphasising the authenticity of these get-ups. Certainly, the majority of the subjects he has chosen don’t wear the clichéd over-the-top ensembles that we associate with the Pride event. In fact many of the outfits the men wear appear quite conformist. A photograph entitled Stripes features a man in work wear – a striped skirt teamed with a white shirt. Themba Qume, Zondi 1 Soweto, 2011 features a man in a wrap-over knit dress. The hemline is inordinately high, but apart from that the silhouette, fabrication and styling are sophisticated and dignified. If you encountered this young man on a street you wouldn’t give him a second look.

This enduring sense of conformity is most obvious in a photograph dubbed A Lady in Black. A man is wearing a black dress and behind him to the right is a young woman in similar dress. Mlangeni highlights the performance of gender but more importantly he implies these men aren’t enacting it as a means of protest or to assert their difference. Naturally, some of his subjects are (consciously) putting on a performance. In at least two images the men push their hips out to one side to draw attention to their feminine attitude. These images suggest that  a sense of play has been retained; there is a recognition that their gender identity is open to manipulation. Nevertheless, these young men perform this act of femininity daily – it’s become unconscious.This series of images suggests a shift in gay activism and the function of the Pride march.

What is most interesting, however, about these photographs is the series they are juxtaposed with – the images dubbed Iimbali, which show young women in reed dancing ceremonies in KwaZulu-Natal and Swaziland. Though this is viewed as a traditional heterosexual ritual, the young women are also engaged in a rite of passage that concretises their sexual identity.

Like the young men, this ritual is enacted publicly – and the imagery depicting it has become an ubiquitous part of popular culture. What is striking about the two series is the common setting – large open spaces populated with crowds of people. These environments obviously embody public space but the absence of any urban furniture emphasises that the rituals are temporary contrivances. One photograph of an empty field littered with rubbish after an event illustrates this best.

By drawing similarities between these two rituals, Mlangeni is able to valorise the existence of both. The comparison allows the activities at a Pride march  to be viewed as “normal” behaviour, something not too different from traditional conventions. This is further echoed in his artist statement where he raises the term “uSis’bhuti” which refers to boys who behave like girls. “Why then do we hate these boys when they have grown up to be men who dress as women?” he asks. That such a term is part of the African lexicon and is used to characterise homosexual tendencies in African culture implies that there is a precedent for a system of play that permits men to explore femininity.

In this context homosexuality shouldn’t be deemed “unAfrican”, as some so-called traditionalists often declare. Mlangeni isn’t the first artist to evoke a traditional practice that permits gender ambiguity; in Umshotsho, Nicholas Hlobo created anamorphic sculptures which referred to a Xhosa coming-of-age tradition allowing teens to explore their sexuality, their sexual fantasies, under the guidance of a mentor. Mlangeni adds to Hlobo’s efforts to trace homosexuality in African traditions, though his scheme is complicated by the fact that some might view reed dancing as an outdated tradition that only serves to prop up a patriarchal |system.

Mlangeni’s exhibition goes straight to the heart of those debates but it also follows in the path of Zanele Muholi to some degree in terms of connecting the relationship between dress and sexual identity. Compositionally, however, Mlangeni’s photographs aren’t thrilling – they are even more banal than conventional documentary images. In fact the series on the men in dresses appears like snapshots – the subjects are clumsily cropped. Mlangeni couldn’t control the conditions in which he was photographing; these are spontaneously posed images.Yet there is something rewarding about the everyday look of these photographs; it underpins the authenticity that he persistently tries to establish. - published in The Sunday Independent, Jaunary 29, 2012
Posted by Mary Corrigall at 10:12 PM