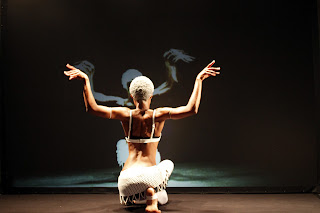 Nelisiwe Xaba and I are Facebook friends though we had not met before. Well, not officially. We exchanged observations outside a theatre after a performance once but we never introduced ourselves. Xaba doesn’t reveal much about herself on Facebook; her posts are usually dance related – video clips of works – and her profile picture is a photograph (of her) from the dance production Sakhozi says “non” to the Venus, where she wore a black ensemble woven from strips of tyres. It looked like a frayed basket that had been moulded to the body. In the photograph her face is made up so that it appears like a mask. The production was last staged in 2009 at the Market Theatre under the banner of The Venus.

Naturally, the title referred to the work, They look at me and that’s all that they think, which unpacked the politics surrounding the troubled life of Saartjie Baartman, the so-called “Hottentot Venus”. Xaba is most famous for this dance work. Admittedly, it was extraordinary. She performed it in a large crinoline skirt, designed by Carlo Gibson from the StrangeLove fashion label. What was unusual was that the work centred on this exaggerated garment – at one point it transmogrified into a screen on which animations were projected. It is rare that a garment, the costume, is so integral to a dancer’s expression.
“It wasn’t planned that way,” admits Xaba when we meet. She is sitting in the sun on a balcony outside the Wits Theatre with Mocke J van Veuren, who is collaborating with her on Uncles and Angels, a new work which will premier during Dance Umbrella 2012.

Xaba explains that she commissioned a skirt that could simply open and close and could work as a screen. Gibson delivered what has probably become the most legendary skirt to have been introduced to the local dance world.
“He had created a monster.” Xaba laughs, but she embraced the costume: “It offered hundreds of possibilities.” Its scale presented limitations. She revels in physical restrictions – this is an intrinsic part of dance; it is an expression where spatial, bodily and social constraints intersect.
In Plasticisation, a work she performed in 2007 at Moving Africa 3 at the Barbican in London, Xaba danced her entire solo from inside a large checked plastic shopping bag, like the ones used by Zimbabweans when they travel across the border and back. The central role of dress in her work created the impression that clothing was an extension of her expression. It had always left me with a sense that through clothing she was expanding the vocabulary of contemporary dance.


Gibson went on to design the costumes for Xaba’s Black!...White?, a production which premiered at the 2010 Dance Umbrella, but they weren’t the centre of attention. Xaba suggests that if you can dispense with an outfit and the work retains its integrity then it is not essential to it. Central to Black!...White? was animation. Not only were animations screened but the dancers recreated the gestures that characterise this art form. They achieved this by lying on the floor so that their movements were weightless and mimicked the stylised kinetics of animation. There was no denying that, once again, Xaba had created a novel theatrical device, through engaging with a discipline outside of dance. Of course, Xaba doesn’t simply dabble with different disciplines; she collaborates with experts in different fields and the influence is seamlessly embedded within the dance – it sets the rules of engagement for that particular work.

Uncles and Angels will be no different. Extending her interest in animation, this new work sees her using film in quite a unique way. Two cameras will be trained on Xaba while she dances on stage, and the images will be fed onto screens behind her.
“In a lot of different performances there are screens showing what’s happening on stage. When you go to a music concert, for example, the screen is massive and the musician is almost irrelevant. We have such a screen culture. We are looking at the relationship between performer and screen,” explains Van Veuren.
Xaba and Van Veuren aim to subvert this relationship in a number of ways. A software program will “filter” the live footage of a dancing Xaba, causing it to be delayed or multiplied.
“I get delayed, multiplied and paused,” pipes Xaba. These images will be displayed on the screens behind her and are intended to signify different aspects of the young|protagonist she embodies. They map her imagined selves.
“Nothing will be pre-recorded, except for the music. It becomes this game how live video is duplicated and looped. It is an odd thing for theatre,” observes Van Veuren.

He keeps using the term “play”, not only in describing the relationship between Xaba and the imagined characters and her engagement with the medium of film, but also in the process of creating this unique performance. It’s a word that has become a fashionable part of artists’ lexicon. It evokes Jacques Derrida’s notion of “jeu” (game), an essential aspect of poststructuralist theory, but for artists it has come to characterise a distinctive approach to art making, which is experimental at its core. More crudely put: it is about “trying things out”, without being weighed down by the burden of failure or transgression – that one is exploring beyond the territory laid out for a particular art form.
The idea of “play” within the context of Uncles and Angels also has metaphorical significance in terms of the central character that Xaba portrays, who tries on different characters.

In this respect, “play” is empowering as it suggests that this character isn’t confined by societal conventions or rules, implies Van Veuren.
This is particularly relevant given the subject matter: reed dancing ceremonies. In the booklet promoting the Dance Umbrella it is suggested that this new work is connected to this Zulu and Swazi cultural practice but Van Veuren and Xaba are at pains to point out that it is just the symbolic language they have adopted.
“It’s great to use as a metaphor because it is so visual,” says Van Veuren. It is also a part of popular culture, points out Xaba.
“Reed dancing attracts tourists, local and international tourists. If you Google it the first site that comes up is the SA Tourism board. We are selling our little girls.”
Xaba will appear in an outfit that references the reed dancing tradition, where young women are subject to virginity testing and parade in front of the monarch, but the performance is designed to unpack the way sexual identity is inculcated in young people, proposes Van Veuren.
“(Similar things happen) to boy scouts and girl guides, though much less explicitly. It happens to us at school. We tend to forget about those things; in our schooling system there is a lot of cultural grooming that happens there.
“I went to a conservative Afrikaans primary school and the kind of grooming that happens there, girls and boys were encouraged into particular streams of education. It has a strong similarity. We are not condemning this practice (reed dancing),” he asserts.
Xaba is more critical of it.
“In Africa we tend to go back to cultural practices to solve contemporary issues; for me that is a problem. When I grew up I had never heard of it. It was stopped by someone; missionaries, apartheid. Somewhere in the Eighties the (Zulu) king decided that the girls had lost moral values… not everyone else, just the girls.”

Van Veuren doesn’t want their performance to be read as that which is directly concerned with reed dancing.
“We are not criticising any religion or practice. We throw in allusions to other cultural practices.”
Universalising the issues tied to reed dancing is also a way of deflecting ideas that the work reflects stereotypical notions about Africa. Xaba is always aware of how European/American audiences will read her work.
“I don’t want to be a UN-sponsored production where the audience will be saying: ‘look those Africans are still doing those|(traditional) practices’. We have to be careful. I don’t have the answer but I am aware; I do not want to be selling Africa to Europe.”

Xaba made that point clear in Plasticisation, in which she essentially packaged her body in a giant bag. Some of her intended audience didn’t get the message. A reviewer in The Guardian observed that, that work was nothing more than “an advert for recycling plastic”.
This misreading or interpretation suggested that Europeans may be ill-equipped to read South African dance. I ask Xaba if she would still be making the same work if she wasn’t forced to show it abroad.
“If I was only performing in Soweto it wouldn’t be an issue who is looking at me. Because I travel around the world it is an issue. Who invites me, why they invite me, I have to be aware of those issues.”

One of the ways of countering the kind of stereotyping that continues to plague African works is for the artists to embrace ambiguity. Undoubtedly, Xaba and Van Veuren resist positioning, describing and locating the new work during our conversation. This vagueness can be partly attributed to the nature of dance: it originates from a non-verbal base, so its subtle intonations and motivations reside within the body. This visceral approach intrinsically lends itself to a non-linear, non-literal product.
“I create in movement,” confirms Xaba, “the characters, everything, is explored through the choreography.”
Xaba had yet to start choreographing the piece when we met – the duo were still caught up in exploring and testing the software that mediates the live footage. As a result, whenever I enquire about the nature of the dance; her bodily responses to the subject matter, she just smiles.

For this reason I feel like I am leaving empty-handed when I part with the duo; they have not spoken about the dance aspect at all. Van Veuren tended to fill in the silences by describing the technical aspects of the project.
The non-linear, non-literal aspect of the dance is further enhanced by the way Van Veuren uses film. Hailing from an art background, his use of it is experimental.
“I recently was in the position where people were expecting me to teach them film, the rules of film, and I was at a complete loss.”
Van Veuren’s previous filmic art works, Minutes 2010: Time, Movement and Rhythm in Johannesburg and Minutes 2005 were both predicated on the notion that linear time is a social construct designed to regulate our lives, according to one reviewer.

In Uncles and Angels, Van Veuren will be tampering with time, distorting it in the sense that images of Xaba’s live performance will be delayed and multiplied. Once again I will be confronted with a mediated image of Xaba, like the one on Facebook.
After meeting her, I don’t know her any more than I did via that social media platform – she didn’t give away much. She didn’t want to  - she said she was tired of recounting her entry into the dance world.  I do leave with more of an understanding of the interdisciplinary nature of her practice.
She enjoys exploring different visual languages and while this expands how we conceive dance, it is clear from our interaction that she doesn’t deliberately set out to do this. She is simply a curious performer. She likes to play. - published in The Sunday Independent, February 5, 2012
Posted by Mary Corrigall at 9:35 AM