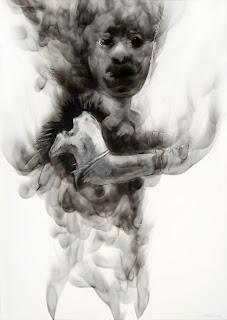 This really comes quite strongly into focus in this latest exhibition, titled Ashes to Ashes and Smoke to Dust, which presents a number of works in which the textural and sensory attributes of the subjects makes them feel quite lifelike. Naturally, Victor doesn’t simply leave it up to the smoke stains to create marks, she draws with charcoal over the smoke, accentuating areas and adding detail where necessary. Her “interventions” are more or less seamless and the results are persuasive. The flesh of her subjects appears velvety and translucent, accentuating the vulnerability of it – and its impermanence.

In this way the medium is able to fix her subjects in a liminal state between life and death. This is particularly pertinent to a series of drawings dubbed “the offerings”. The subjects mostly consist of sheep and a young girl. Their disembodied heads hover in the frame before they presumably meet their death.

The smoke captures this sense that they are in between life and death but it also amplifies their innocence: they aren’t weighted by a profusion of dark lines, which Victor often uses not only to evoke age, but historical and emotional baggage.  This is the case with the perpetrators of atrocities that feature in a work dubbed A Butcher’s Altar, which includes a rendition of the late Muammar Gaddafi.

As always Victor’s work is concerned with political subject matter. She is not interested in the subtleties of political policies or rhetoric: it is the effects, the senseless suffering caused by corrupt bigots that compels her to make art. As a reviewer once remarked: “Victor is an angry artist.”

There is an intelligence to her portrayal of suffering; the sacrificial lambs in “the offerings” are unaware of their fate; there is no fear in the eyes of the sheep or the girl. But it is this lack of awareness that deepens the evil of the act performed on them. The Old Maids presents three ageing domestic workers sitting on a street. These women are weighed down by the knowledge of their fate; the legislative policies that once dictated their lives have changed but it is too late for them to live their lives over.

In rendering this powerful image, Victor uses ash and charcoal. The medium here is significant  in terms of how it evokes this anguished, though everyday, scene.  The ash, which refers to the remains of something that has been destroyed, implies that renewal is out of reach.  A phoenix does not emerge from these ashes. The fire that has given birth to them did not cleanse them of the past, rather it seems to have distilled its essence, which now scattered anew gives life to a corrupted form. - published in The Sunday Independent, January 15, 2012
Posted by Mary Corrigall at 9:50 PM