Kudzanai Chiurai's State of the Nation 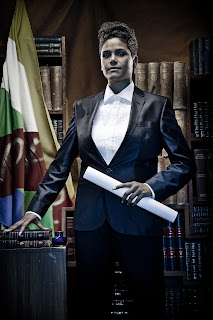 It is not unexpected that Kudzanai Chiurai’s exhibition is showing at two locales in Joburg’s inner city – one a makeshift gallery in a warehouse in Newtown, the other the Goodman Gallery’s Project Space at Arts on Main. His work has often exuded a gritty, downtown persona. Mostly it’s the graffiti-style vocabulary that has engendered this notion that his work is “of the streets”. In fact, his ties to street culture are so blatant one reviewer suggested that his art appeared incongruent in a conventional gallery setting.

His work’s connection to the urban environment, however, goes much deeper than superficial links with a pseudo-Jean-Michel Basquiat-like graffiti style. The composition of his paintings and photographs at State of the Nation reflect the palimpsest of an urban African environment populated by diverse signs and iconographies, which reflect the multitude of cultures, traditions and histories that all converge in these modern conurbations. They are places where first and third, African, European and, now, Chinese cultures collide and meld. The signs that populate Chiurai’s paintings – and photographs – should be in conflict with each other. In a painting titled Corinthians (2011) the word “Hollywood” is scrawled across a canvas on which also appears a naked female cadaver, the shadow of a plant, a skull balanced on a stick, a disused tyre and the phrase “time picture for your digital use”.

Despite the fact that these signs, phrases, names, appear mismatched and disjointed from their origins, they now exist as part of the fabric of the African urban experience both virtual and real. The skyline of a city is depicted in the background of Corinthians, alluding to the built environment but it is this incongruent mix of signs that root the painting in the urban African setting. In many ways his work evokes Jean Baudrilliard’s observation about modern reality consisting of simulated signs representing reality, such as a Hollywood sign serving as a shorthand for a place.

Chiurai’s work therefore serves as description of African urbanity. The signifiers of place are always clichéd; the Hollywood sign alludes to American imperialism and a leopard-shaped sofa evokes a generic symbol of Africa. Everything in his pictorial planes have been reduced to overstated forms – consequently what he presents is not the gritty reality of street life but a symbolic shorthand evoking a contested African identity that is expressed in the façades of the continent’s cities.

He presents troubled spaces; death and violence are predominant motifs. This multilayered urban palimpsest is an unpredictable territory. The titles refer to parts of the Bible but there is also a sense that the worlds that Chiurai presents are rooted in biblical times; not that they are modern replicas per se; rather he aims to chronicle lost societies without a moral compass to guide them. A dog gnaws a human arm. A skeleton treads over the bones of his ancestors. Words or phrases such as “Nursery School” and “Education for Success”, which appear in a painting are ironic, meaningless: there is no innocence or transcendence. As the title of one work implies: the children in this place have no mothers. In White Picket, an idealistic domestic environment is violated by an angry man with a knife in his hand. This is a world that has been turned upside down; the natural order has been reversed. The world that Chiurai paints – quite literally as this chaos is best illustrated in his paintings – is one in need of a “saviour”, who can steer this sick society on a new path.

But can such a society produce such a man – or woman? It is through a series of extraordinary photographs that Chiurai explores the ideological systems, forces and “saviours” that can deliver this morally corrupt society from a pervasive malevolence. These photographs are staged re-enactments of dated photographs of significant political occurrences or famous paintings. The most striking is a rendition of the Last Supper, which features the figure of a composed female “Jesus” (evoking Dan Brown’s theory in The Da Vinci Code) presiding over a group of miscreants that include a warlord and a witchdoctor who is said to be burning human flesh.

This Jesus figure is a rendition of Patrice Lumumba, the former prime|minister of the Congo. Though Chiurai uses a woman to pose as him, we know it is him because  a separate portrait (Revelations XII) recalls a well-known photograph of the Congolese leader. Most of the photographs are re-enactments of historical images, others are renditions of Chinese communist posters. Though some relate to actual events, they have been fictionalised via stylisation and parody.

The backgrounds, the contexts of these images are homogeneous, a collage, consisting of rose patterned wallpapers and West African fabrics. An old fan with horses printed on adds to the retro-kitsch pastiche. The theatrical tales of terror, violence and redemption all take place in this standardised collaged setting, a bricolage, defined by diverse cultural influences that also define his paintings and which evoke intricately layered African conurbations.

Chiurai creates the impression that a cross-cultural clash is embedded in the environment – or are these settings a product of such conflicts? Undoubtedly, the players – soldiers, victims, political leaders, foreign dignitaries and witchdoctors – are products of these jumbled realms, where power, control and survival aren’t discreetly negotiated but manifest in dramatic battles. Ultimately, it is the theatrics  and visual rhetoric of this burdened existence that Chiurai so artfully articulates. - published in The Sunday Independent, November 20, 2011.
Posted by Mary Corrigall at 6:33 AM

I could'nt agree with you more. I have found that Kudzi's work invariably ends up addressing the urban landscape and how it is actively interpreted by the presence of those who live within it. This is more pronounced I believe, in his Graceland and YellowLines series. I recently completed a term paper for one of my masters' subjects on Kudzi's work dealing exactly with the points that you raised. I am hoping to develop a research report that will focus on the idea of the artist as flaneur in the postcolonial city, next year.

On a different note altogether, I have always been interested in writing about the arts but find that there are so few arts writers out there and it seems near impossible to break into the industry as an arts writer. I do not have a journalism background but rather, have an art history BA and media management pgdip. I was a features writer for the varsity paper while at uct law school [subsequently taking a break from to take my art history studies all the way]. I hope the second half of the comment has not been inappropriate in any way, other than that, please keep doing what you do for the arts - there are those among us who appreciate it :-)

I must say that I absolutely agree with the point you make regarding Kudzi's work and its references to and invocation of the city. I am currently a masters-art history student at Wits and recently completed one of my modules in art & architecture through a term paper by considering Kudzi's work albeit my focus was on his earlier work from the series, Yellowlines and Graceland. I am very interesting in the way that space is represented and defined and how it,in turn, defines its inhabitants. There is, I believe, an aspect of the flaneur at play [the artist as flaneur - the artist representing a space of the flaneur]. Of course these are but aspects of the greater picture.


I am also very happy that you are among those who support the need for critical engagement with the arts particularly the criticism thereof. In a former life, as a full-time law student, I wrote for the University paper, always with the intention of bringing to light the significance of the arts and artists. I am therefore quite curious as to how one would go about joining the arts writers and critics association as I would like to further expand my knowledge and basic ideas amongst a group of like minded peers.

Thanks for your in-depth and informed commentry. You are welcome to join the SAAWCA - it is an open platform. Simply send an email to criticsassoc@gmail.com