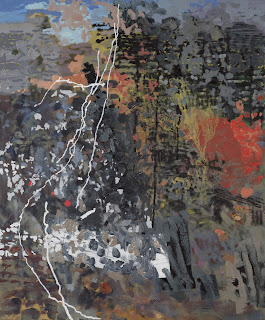 The best point of entry into Clive van den Berg’s new exhibition is an oil painting called Man Flails with Maps II (2011). It features the figure of a naked man clutching what appears to be a large map. It is scrunched and he is shaking it so hard that the lines and colours on it are falling off into the air and on to the ground. This painting offers a vital clue to a collection of bold abstract paintings defined by a cacophony of colour and lines that seem quite meaningless – in fact, they are meaningless… but more of that later.

The man shaking the maps could be seen as Van den Berg, who, through a series of the abstract paintings, presents deconstructed maps. In these paintings the lines have been pulled apart and haphazardly arranged to engender incoherent landscapes. Van den Berg is not just deconstructing an object but a visual vocabulary rooted in a pseudo-scientific paradigm. Deconstructing and “decomposing” (a word Rosalind Morris uses in the catalogue), however, don’t quite sufficiently describe what Van den Berg is attempting here, as both terms allude to a methodical act motivated by a desire to understand (and challenge) the mechanics of a construct.

Van den Berg isn’t striving towards understanding but the opposite; he wants to unknow what he knows – and by proxy what we know about the land. To achieve this he needs to jettison the tools of understanding and ordering it.

He subverts the function of the map; instead of guiding the reader/viewer around a territory, these incoherent paintings ensure that we cannot find our way. We are paralysed by the languages that are meant to order space. You could argue, of course, that this is precisely what occurs with maps: that they separate us from the land – the language of map-making becomes a more reliable marker of space than the space itself. Put another way: the land misleads us and maps tell the truth.

Naturally, it isn’t only the language of map-making that Van den Berg attempts to misuse but the traditional vocabulary of landscape painting that also has been used to map the land, though in quite a different way. The interrelationship between the two comes into focus in two watercolours dubbed Johannesburg II and III, where crude lines evoking the language of a mapping link up with brightly coloured quasi-impressionist renderings of a natural landscape. That one language aspires to accuracy and the other a subjective and idealistic interpretations of the land isn’t of importance; they are both politically and historically loaded. However, there is a sense with these paintings that the vocabulary associated with maps describes subterranean territory – the unseen parts of the land.

Van den Berg is reaching towards reimaging our reading of the land, its representation thereof. He wants to escape a system of plotting the external world but he cannot escape the visual syntaxes that define it, even if he discards the structure, so to speak. There appears to be nothing beneath these sign systems: there is nothing to see but the lines and amorphous shapes of these deconstructed vocabularies. In this way this disassembled language evokes the ambiguity of the landscape; the seen and unseen layers which cannot be reconciled. Van den Berg allows the land to exist in this disordered state. This makes his paintings slightly frustrating to view; you feel trapped, though the possibilities of what they might signify appear endless – the shapes and lines appear to extend beyond the edges of the canvas.

This tension and our desire for ordering the landscape while marvelling in its disorder is most obvious in Scarecrow I and II, featuring a wiry female figure wearing a dress with a print of maps. It is unclear whether she is trying to separate the lines from her garment, to be free from them, or whether she is disseminating them on the ground below. It seems that the act of letting go is no different from re-inscribing this system of ordering. These lines and forms don’t simply function as spatial markers, they contain (and define) memory. In this way they are not simply an external sign system, they describe an intangible internal territory, too. As such, through his abstract paintings, Van den Berg tangles and scrambles inner and outer territories.

He illustrates the connection between the body and the land quite obviously – such as in works where parts of the land appear to flow from the body. Like Man Flails with Maps II, these kinds of works illustrate his ideas and explain his abstract works. Granted, the abstract works are inaccessible – they are intended to express inaccessibility and incoherence, and perhaps need to be contextualised – but in such an overstated manner? Perhaps the most important aspect of this new collection of works is the rupture it articulates. Not just a break in an aesthetic language for the artist, but the state of crisis and possible condition of renewal it promises.

It seems as if Van den Berg wants to get beyond our history. There is also a sense that existing languages are incompatible with our society at present and have brought about an inevitable breakdown. An imagined future appears to be impossible to access with these outmoded, historically-loaded vocabularies. - published in The Sunday Independent, October 23, 2011.
Posted by Mary Corrigall at 12:00 AM