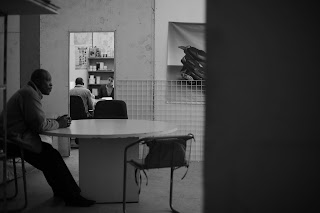 In Vacancy, two men are seen arriving at a building where they both apply for a job. Though we never know what kind of job it is, it appears to be a low-level job involving driving a truck. For this reason, the interview process involves two parts; a discussion and then a driving test in a yard outside.

One man merrily goes through the motions of both while the other, who seems to observe the details of the setting much closer, noticing a battered door handle and a dented pillow on a sofa, pauses in the stairwell before taking the driving test. He quietly exits. It’s a subtle rejection of an ambiguous set of circumstances.

Based on a variety of physical and non-verbal clues, the man comes to believe the job is not for him. His rejection is therefore based on instinct, so perhaps his moment of suspension is really the moment in which he embraces another belief about what work should entail. This decision or insight occurs in a split second, creating this sense that it is a temporary state. Perhaps he arrives home and regrets walking out.

These films look at shifting beliefs around work and, given that the current work ethic and the sense that our identity and self-importance is tied to work are derived from Christian teachings and others, it lends credibility to the link between faith and work.

It is not only religious fanatics or card-carrying political party members whose world view is shaped by belief systems but every individual’s outlook is influenced by a type of paradigm. Even being a non-believer is to believe in something. The man’s decision to skip out on the interview maps the moment when one set of ideas is replaced by another. The switch is activated by empirical information but also something quite intangible, mystical even, articulated in the haunting notes of the music, because isn’t faith about transcending the physical realm?

Gush roots us in the environments and spatial dynamics of each setting via close-ups. In this way he presents a textural and sensory encounter for viewers that establishes the seductive pull of reality and how it thwarts, challenges transcendence, though it also creates the conditions that inspire it.

When a young woman, who we presume has been the victim of sexual harassment or some other distasteful event in the workplace, gazes out of a window of a conference centre after a Cosatu meeting, she is transported outside that context and sees her predicament from an external perspective.

It is in this moment we surmise that she realises that she can no longer be a supporter of Cosatu, who she works for. But this may only be a temporary pause; she will have to work hard to restablish her faith in the organisation, a skill her superior has perfected.

It is interesting that Distance, which is set in a bland hotel setting, is meant to articulate an absence of belief, according to the press release. That the characters are all white also speaks volumes and implies that their inability to embrace populist beliefs situates them in some kind of liminal territory – an in-between, transient space.

Above the beds in the hotel suite is one of those mass-produced artworks depicting what could be a wagon, evoking the laager and mining motifs – though, of course, its stylisation speaks of the commodification and disintegration of binding belief systems. The wheel with its multiple spokes also evokes the Cosatu logo, which Gush reworks and deconstructs through a series of drawings and murals outside the gallery.

In the murals Gush reimagines the Cosatu logo by infusing it with religious slogans and motifs, thereby conflating two worldviews. As artists know only too well, it is in the representation – to use the title of the exhibition – of religious and political symbols that belief is|concretised for, as the films establish, it is through visual, non-verbal signs that faith can be altered. - published in The Sunday Independent, October 16, 2011.
Posted by Mary Corrigall at 11:27 PM