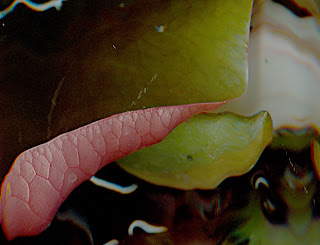 “Immersion” and “deconstruction” inform this body of work and Stern’s mode of documenting reality, which involves an HP scanner harnessed around his neck as he wades through the pond. Put plainly, he scans his subject matter. Because he does not remain static while doing this he generates images that appear life-like, but distorted. Not too unlike the kind of distortion reality undergoes under Monet’s heightened gaze, which amplifies the physical and sensual properties of his interest.

Just as Monet realised a purely figurative rendering of organic life doesn’t quite relay the physical experience or weight of reality, so does Stern recognise a straight life-like scan won’t do so either. Stern’s proximity to his subject matter facilitates a level of abstraction before he has even begun his process of “decompression”, which involves undoing the compression of the image. He is so close to his subject matter he doesn’t necessarily observe it, but is immersed in it. Because of this the view is distorted. It is a bit like putting the lens of a camera right up against that which is to be photographed.

Physical distance is a prerequisite for representation. Stern’s approach challenges this idea for not only is he immersed in his subject matter, but ironically he equips himself with a gadget that has no view-finder so he is unable to see the images he is capturing. As a result he records while not being trapped by, or implicated in, the act of recording. Thus representation is separated from seeing, it becomes an intuitive act of another kind.
si Stern. Giverny of the Midwest (detail 2)

This, of course, is the antithesis of the effect digital mediums have had on a society which has become more consumed with the act of documenting life that reality is viewed through a lens. In this way Stern succeeds in achieving what Monet never could: he is able to exist in a moment without the burden of reconstructing it. For this reason he is a participant rather than a detached observer. Stern is able to produce images that relay so much detail, like a insect caught in a petal or the veins of a leaf. These details might have evaded his detection despite his proximity and immersion. This suggests he was unable to fully appreciate the scene in its totality. In this way the full weight of reality is always withheld.

It is only in the processing of his scanned images, in which he stretches them out, that another encounter with his subject matter becomes possible. This encounter is obviously subject to his manipulation; he heightens the colours and decompresses the images to such a point that they are abstracted.

Stern doesn’t present one cohesive view of the pond, but a plethora of cropped details of it. The images are pieced together to form three larger “canvases”. They need to be scrutinised up close, where you can spy traces of the submersion of his physical being in the work – denoted by finger prints.

These works are excessively beautiful and compel immersion. Viewing them is a time-demanding exercise, which defies our usual consumption of imagery. This is exacerbated by the number of small canvases one must view, which appear like pieces of a puzzle even though they do not fit together to create a complete image. These are fragments of reality. Stern suggests a scene cannot be relayed in its entirety, so despite his reverence he challenges Monet’s work. Stern doesn’t order the visual world; he casts his garden pond scene as an indeterminate one that exists beyond the boundaries of any frame. - published in The Sunday Independent, August 22, 2011
Posted by Mary Corrigall at 12:24 AM