Unit for Measure III: Testing the boundaries between art criticism and production 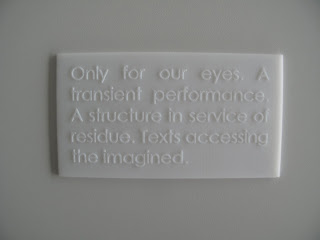 What happens when the formal boundary between an art critic and artists is dismantled? Are there new ways of (re)conceiving the relationship between art production and art criticism?
Artists Bronwyn Lace, Vaughn Sadie and myself decided to find out with an experimental project dubbed Unit for Measure III. We took an existing art project, Unit for Measure, which I had already written about. As my written response to the work shaped its second incarnation at the Durban Art Gallery, so it made sense to discover what would occur if I was brought into the process from its inception. I wasn’t simply a co-conceptualiser; I was involved at every stage, even in the making of the work – a rarity for a critic. I was de facto an artist.
It has been a fascinating process, which will not only help me reconceive of new functions for art criticism but will feed into my other side project: the establishment of an arts writers and critics association (read about it here), which I have founded with the express desire to renew the relevance of criticism and push the boundaries between artmaking and criticism.
The results of this experiment will be on show this coming Monday at the FADA Gallery at the University of Johannesburg as part of the Collaborations/Articulations group exhibition, curated by Brenden Gray.
It is a three-part artwork, which consists of visual, aural and textual elements. Unit for Measure III is the result of a dialogue between us three collaborators in an effort to not only discover the interrelationship between texts and images but to steer an existing collaborative project centred on spatial dynamics, dubbed Unit for Measure, into new territory.
With a focus on the lasting residue of artworks,  we present a trace of an art object. Thus the artwork per se is removed from the gallery and the residue or trace of its physical existence becomes the focus of the artwork, echoing the function and privileging of text and research in art historical discourses.
Unit for Measure III will show at the FADA Gallery, Bunting Road Campus, Auckland Park, the University of Johannesburg until May 24.
I will reflect further on the process and result of this experimental project at the National Arts Festival in Grahamstown on July 4th at a panel discussion at Think!Fest entitled From Criticism, to Critique to Criticality: Developing Performatory and Participatory Forms of Criticism. Sean O’Toole and Leon de Kok will be joining me for that discussion.
Posted by Mary Corrigall at 11:28 PM