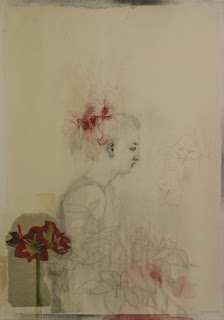 It was set to be the art world’s most talked about non-wedding – or anti-wedding – of the year. Though not quite a Middleton and Windsor affair, there was much buzz in Joburg as invitations bearing gold-embossed fonts arrived in the postboxes of art fundis, patrons, critics and fashionistas with an appetite for sartorial spectacles. The invitation conjured a lavish betrothal, despite the fact it was entreating visitors to attend Frances Goodman’s wedding-themed exhibition, Til Death Us Do Part. With a performance rumoured to be in the offing, it was not going to be an ordinary exhibition opening.

And in the weeks preceding the event, the Goodman Gallery’s staff fielded numerous telephone calls and e-mails enquiring whether it was a bona fide catered affair and whether RSVPs were thus imperative. The gallery had underestimated the popularity of anti-weddings: over 250 people flocked to the modest Jan Smuts gallery in anticipation of Goodman’s subversive wedding act. There was no question that it would be anything other than subversive; artists have a tendency to upturn tradition. There was also talk that Goodman’s exhibition might be the final manifestation of an acrimonious break-up.

The performance as such had no beginning or end but simply consisted of a bevy of women parading in their old wedding dresses. Notably, there was not a groom in sight, underscoring the exhibition’s gender bias. Audio recordings of women articulating their vexed relationship with marriage and the burden it placed on their identity emanated from a pole wrapped in fabric supporting a makeshift wedding party tent. Fashioned from blocks of richly embroidered ivory satins, silks and taffeta, the tent evoked the most prominent attraction at weddings: the wedding dress. Undoubtedly the bulk of the billion or so viewers of Kate and William’s televised union were most interested in her dress, as if it would somehow be an astounding revelation. Undoubtedly her future relationship to Britain’s aristocracy was encoded in the conservative white lacy number that evoked princesses of the past.

Goodman’s fabric installation created the illusion of stepping underneath or inside a large wedding dress.Goodman clearly wanted to bring the unspoken sentiments and debates that belie weddings to the surface. Consequently blocks of wedding fabric were adorned with statements by a variety of young women, alluding to the nitty-gritty realities these huge social occasions seem to silence. In this way the work is, de facto, created by the variety of female respondents that Goodman interviewed. As such there was little ambiguity. The work and the statements were ordinary and predictable. Based on many of them, it seemed that women remain victims of this social practice, even when they choose it. The artworks, mostly framed pieces of fabric or car bumpers emblazoned with bitter statements, offered little substance beyond the surface. But perhaps that was the point: weddings are such stylised rituals that the unions are overshadowed by exaggerated theatrics. Consequently, the only way Goodman was able to insert a dissident  voice was to literally embroider it onto the surface among the flower and butterfly motifs. However, by so doing, these gestures were simply co-opted by the system they assumed to rally against. There is no escape, implied Goodman.

The exhibition’s most striking work was an installation at the back of the gallery, set in a room configured to resemble a dance floor. A disco ball reflected bright specks of light onto a floor covered in confetti with the word “forever” punched into it. Upon closer inspection, it became obvious that the piles of “forever” confetti weren’t authentic – thin piles of confetti were supported by props covered in white fabric to create the illusion that there were large mounds. This installation didn’t just evoke hypocrisy and betrayal but ultimately the impossibility of quantifying “forever”. So even if a bride or groom profess to love each other forever, they have no tangible notion of that concept.

With the artworks Weather I and Weather II, Gerhard Marx also made an attempt at quantifying the immeasurable: clouds. Given they are so amorphous, this is an impossible feat. Of course, Marx was aiming at a representation, but as this semi-sculptural work is fashioned from rulers, it hints at a desire to arrive at a precise measurement.
It was only when you were standing close to the work, displayed in the viewing room of the Goodman Gallery, that you were able to see it was made from hundreds of black rulers layered over each other. From afar, these dark clouds were highly stylised renderings, like a 3D cartoon drawing. Consequently they almost mocked the incalculability of the objects they represented.

The relationship between an object and subject and its representation drives Terry Kurgan’s and Ruth Rosengarten’s Still, Life exhibition at Art On Paper, which consists of hand drawings of photographs (the objects). In other words, these are representations of representations, sort of hyper-mediated products, though you wouldn’t know it by looking at Kurgan’s figurative hand-drawings, which evoke a live model, particularly in the sensitivity of their execution.

Predictably, I kept wondering about the source – not the teenager in Kurgan’s portraits, but the photographs of her. Or, at least, I pondered the insufficiency of photography, which no doubt must have compelled Kurgan to reconstitute and reconfigure the images. Undoubtedly Kurgan’s obvious enjoyment of texture would have been thwarted by the glossy veneer of the photographic image. Kurgan pays as much attention to the surface of the paper as the drawings.

The rabbit glue she uses to prime the surface not only has an impact on the drawing, allowing her to retrace lines, but establishes a soft veneer, like a screen, drawing attention to our observer status. Kurgan further draws attention to the screen by mixing the glue with a pale pink gouache, which appears like condensation. Red oxide and wax is applied to the surface of some drawings, instilling other tones and textural qualities into the artworks. In other words, the work has a distinctively tactile quality, implying a field of sensation and experience beyond photography.

Photography’s fixed nature might have also frustrated Kurgan, or at least encouraged her to translate photographic images in a more tentative realm. The black smudges that bleed from her charcoal lines hint at the numerous alterations that have occurred. Drawing is a tentative medium – particularly the charcoal line which can be erased and redrawn. Consequently, you are always aware that the profile portraits of the teen girl (her daughter Jessie) are provisional and transitional.

Transition is a recurring motif in each of Kurgan’s portraits. Though they are untitled, subtitles which appear in parenthesis evoke a series of consecutive actions, from “waiting” to “floating” or from “holds” to “spreads”.
These actions refer both to the fluctuations in the art-making process as well as the physical and emotional states of the sitter. In the artwork dubbed “spreads”, for example, red oxide extends across the paper, almost completely obscuring the silhouette of the sitter. Undoubtedly, these works summon a game of control. By priming her paper with rabbit glue, Kurgan has altered the conditions of drawing so that the line isn’t always within her control – or at least she must push harder to make it.

This ensures that she remains self-conscious of the act of drawing and representation.
The application of oxide and wax appears slightly haphazard, engendering the notion that it is accidentally placed and then worked into a drawing, such as in Untitled (red edge), which shows her subject seated on an invisible chair, suggested via a smear of red oxide. But the work isn’t simply about manipulating various tools in the act of representation and allowing for the unexpected, it is about coming to terms with both the subject (the girl) and the object (the photograph). Always pictured in profile, the teenager remains aloof and her position within the work ambiguous; is she just an object of a formal experiment? Is she really present as a subject?

The randomness and impulsiveness that Kurgan’s medium affords her, and her struggle to manipulate it, expresses the frustration of pinning down a fluctuating subject (and an intangible object). Rosengarten’s illustrative renditions of a series of dated family snapshots provide an interesting counterpoint to Turgan’s more contemplative work.
While Kurgan appears to be interested in retrieving lost information or investing photographic images with new information, Rosengarten flattens or divests her source images of data. Her subjects aren’t rooted in any context and her illustrative rendering nullifies the details of their physical appearance. As a result they function as generic family images, a sort of abstract expression of family connections and how snapshots cultivate and even distort those links.

For many, family photographs are often the only tangible record of family heritage. By flattening the kind of information that makes them powerful indexes of history, Rosengarten emphasises their function as substitutions for the real, disconnected as they are from the present – an articulation of loss and absence. Interestingly, a collection of the reverse side of photographs is even more evocative of the past. The stained, yellowed surfaces that are typically marked with handwritten information about the photograph, such as the date, yield a stronger connection. Here Rosengarten draws our attention to the photograph’s object status and how properties beyond the image are rich sources of information.

This series of images returns your focus to Kurgan’s images, which bear the stains of her process. The red oxide smudges or pink gouache washes that bubble like water at the surface don’t simply evoke a self-conscious engagement with art making, but are discreet markers of time. They age her canvas and steep it in a history while she tries to negotiate representing a subject suspended in another time. - published in The Sunday Independent, May 15, 2011
Posted by Mary Corrigall at 11:27 PM