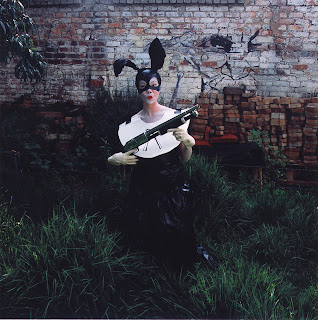 But it was Rose who first appropriated this brand of performance. It is one that evokes Cindy Sherman’s practice – the American artist who many regard as the genesis of this local identity-based art.
In the hands of Rose this kind of critical subversive strategy (or adult dress-up game, if you will) is given quite a different twist. While Sherman mostly inserts herself into real-life roles and scenarios Rose takes on the guise of  famous female figures that have been conferred with a mythological status, such as Lucy, the “African Eve” in Lucie’s Fur, or Saartjie Baartman in the Ciao Bella series (2001). Sometimes the characters simply embody a psychological compulsion, a concept or phenomenon, such as the LovemeFuckme (2001) character, a female boxer who beats herself up, articulating a supposedly female predilection for self-destructive relationships.

What really sets her work apart from Sherman’s is the manner in which she weaves all these characters together into surreal tableaux. Such as in the send-up of the Last Supper in the Ciao Bella series, where a host of female characters pictured in a photographic series are assembled in a video artwork that plays on a large LED screen surrounded by a decorative gilded frame. By bringing all these characters into one setting, Rose implies that these archetypal female characters are part of the same inner world, not just a social or cultural realm but a psychic one. So while some characters she plays are the antithesis of each other, such as Regina Coeli, the nun, and Cicciolina, the porn star ex-wife of the artist Jeff Koons, they are able to occupy the same territory.

Rose suggests that women carry all these contradictory multiple female personas within them, thus they are both virgins and whores, childlike, greedy and learned (embodied in the prim school principal character). Obviously, this implies that a struggle for domination will ensue, which it does. Female sexuality thus remains a heavily contested arena in which cancelling out one stereotype seems to simply involve replacing it with another.
As the title of this mid-career retrospective, Waiting for God, wryly implies, Rose has been preoccupied with upturning religious dogma. This is obviously linked to her desire to explore female sexuality. Certainly the binary coupling of the virgin and the whore, which has dominated female sexuality, is derived from the Bible. In order to liberate women from this pervasive script, Rose reaches back to its origin, the story that maps the moment at which men and women become separate entities – the story of Adam and Eve.

Rose names her subversive rewriting of this mythological tale Lucie’s Fur – referring to Lucifer, the devil, and Lucy, the remains of a female hominid discovered in Ethiopia in 1974 that presented challenges to the creation myth. Like the Ciao Bella series, this comprises of a number of photographic pieces and a video artwork. Rose seemed to abandon this sort of practice, choosing rather to create video artworks which exist independently of photographs, as seen with works such as The Cockpit (2008) and San Pedro V – The Hope I Hope (2005).
Those are strong works but they simply aren’t as interesting as the kind of multilayered multimedia works that evoke an interplay between photography and film.

This mode suited Lucie’s Fur for in order to successfully counter the origin myth Rose had to create a new mythical world, with its own cast of characters. Like the “angel”, an androgynous being whose skin is stained with the colours of the rainbow. This non-racial, non-gender being is the antithesis of the stereotypical characters that star in Ciao Bella, thus in this work Rose attempts to configure a utopian model in which female sexuality is ambigious and not subject to prescriptive racial or gender roles. In so doing she takes a  swipe at the western art canon too, which is responsible for perpetuating Biblical mythology and fixing female sexuality.

Lucie’s Fur is a fascinating series of works and once you become absorbed in them you easily forget that some are poorly executed (the Fucking Flowers (2004) photograph is a bad reproduction) and clumsily hung. Certainly, Rose’s film products are slicker, particularly The Wailers (2003), which depicts a group of Hasidic Jews playing a game of basketball under water at a location that is meant to operate as the Wailing Wall. So while Rose might assume to rewrite the beginning of humankind and weigh in on other politically contested subject matter, her practice is defined by an underlying sense of playfulness and humour. Her world is one in which everything is open to derision, even her art – a game of dress-up that while flippant, offers fleeting insights into the politicized world of female sexuality. - published in The Sunday Independent, April 10, 2011.
Posted by Mary Corrigall at 2:54 PM