Out of Sight: Jo Ractliffe 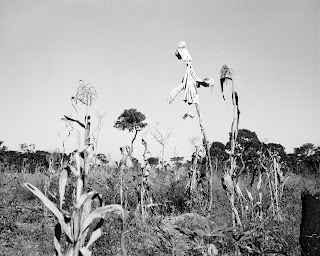 It is as if nature has overwritten history. A concrete grave is cracked and partially obscured by grass and other vegetation, which has penetrated its hard surface. In time this grave will be completely overgrown and its existence will be obscured from sight. The surfaces of buildings have disintegrated and the iconography that once adorned them has faded. Nothing lasts. Not even the traces of a violent war. The natural landscape might exude a sense of permanence but it is constantly shifting, erasing history.

So, superficially, it seems as if Ractliffe’s attempt to document sites along the routes of the border war fought by South Africa in Angola during the 1970s and 1980s is futile. There is nothing left to see. Hence she maps the edges, the boundary where the visible is passing into invisibility. Like the grave stone that is gradually being concealed.

The landscape’s inability to keep a record of the violent and abhorrent events that have taken place on it has preoccupied a number of South African artists. Driving it is a frustrated compulsion to reconcile with a past that cannot be fully accessed. Without visual or physical markers to substantiate and navigate history, the past becomes indiscernible, ambiguous, and slips into the abstract territory of myth. Thus the landscape’s inability to speak evokes a psychological form of erasure and paralysis – until the past has been recovered it cannot be transcended.
In William Kentridge’s animated films such as Felix in Exile (1994), he inserts bright orange lines into his monochromatic palette to draw attention to the places on the landscape where dead bodies once lay. This sense of nature conspiring to erase the past pervades Ractliffe’s exhibition.

Of course, this isn’t the first time that she has aimed her lens at a site of trauma. In the Vlakplaas: 2 June 1999 (Drive-by Shooting) works the absence of any visual residue of the awful atrocities which were committed at this counter-insurgency unit is glaring. By documenting “the border” Ractliffe once again attempts to confront viewers with the reality of a politically charged site, that is both known and documented but is also paradoxically unknown – most are familiar with what “the border” represented but few are acquainted with its physical appearance.
The images of the place deemed “the border”, that Ractliffe presents to us, do not live up to our expectations. It’s a natural environment that was temporarily inhabited for the purposes of warfare. There are only a few disintegrated physical traces that vaguely hint at what has occurred here.

The soldiers attempted to blend in with the environment to avoid detection so their interventions are subtle: natural materials were employed in makeshift constructions. The contrast between man-made traces and nature is further flattened by Ractliffe’s choice to shoot in black and white, allowing contrasting objects to exist on the same colour plane. The monochrome scheme also nullifies the beauty of the natural environment, which would obviously counter the trauma that occurred here. As with the Vlakplaas photographs, Ractliffe allows her subjective reading to filter into her (re)construction of the site. In this way she demonstrates how the present is read through the lens of the past.

In this context small signs, no matter how insignificant, take on great importance. As such, in On the Road to Cuito Cuanavale IV, a pole with disused tins attached to it is conferred with a level of  significance that seems incongruous to its arbitrariness. These items aren’t quite the conduits to another time in the manner of artefacts in museums. Mostly they only substantiate a human presence, thus they amplify the silences left behind.
A menacing air infuses the images. It’s not just the black-andwhite treatment but the angle and treatment of the natural scenery. Trees are photographed at night so that their white bark contrasts against the ink-black sky, engendering an eerie mood.   A cornfield with a flaccid scarecrow situated between the dead crop summons a similar tone. The scarecrow’s white frame conjures a ghostly presence, that seems to evade detection.

Though Ractliffe attempts to suppress the inherent beauty of the natural landscape she can’t resist aestheticising it too, particularly in the densely forested areas, where she takes pleasing close-ups. But an underlying motive drives the rendering of these areas. The dense bush, or a heavy mist pictured in other images, frustrates sight, articulating the impenetrable veil that seems to separate the present from the past. Belying these natural vistas is a hidden menace: hundreds of landmines, a concrete trace of the war. That they are hidden and cannot be handled reiterates the theme of inaccessibility. Just as some of the mines will evade detection so too will some of the truths attached to this site remain buried. - published in The Sunday Independent, March 20, 2011
Posted by Mary Corrigall at 11:52 PM