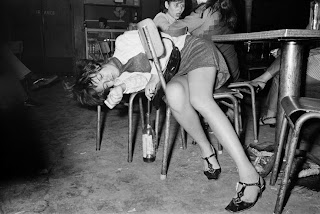 Undoubtedly the conditions in this club fit in with its name, which refers to subterranean cemeteries or passageways, and certainly there is a sense that the very dysfunctionality of this environment and the one that exists outside is what binds the young people who cavort in Les Catacombs. Of course, these interiors aren’t completely alienating – a faux fountain and plastic screens bearing stereotypical renditions of old-world Italian or European cities adorn some areas. But the artificiality of the decorations aren’t disguised; the fountain looks lopsided and flimsy and the pseudo-Italian cityscapes are badly rendered and the sheen of the plastic interferes with the look of the images. Nevertheless, these visual cues are part of a strategy to situate this environment within the realm of fantasy. Nightclubs are supposed to provide an escape from reality. The fountain and the bare floors all work towards situating this place as an “outside” location, engendering the notion that this is a parallel world, a sort of mini-city within a city. It is a city of the inhabitants’ own making and one where they do not have to conform to social conventions.

The most obvious acts of challenging convention are evidenced in a number of images of women showing their naked breasts. But do these acts constitute liberation? In one of the photos a man is squeezing a woman’s bare breast, consequently it is implied that this act is performed to satisfy the men and is just an exaggerated form of behaviour that takes place outside the club. Most of the women sport the fashions of the 1960s: beehives and thick eyeliner. And while one can tell them apart there is a kind of sameness about them that suggests that even within this setting, few genuinely pursue individuality. Instead they are all chasing some ideal that seems just slightly out of their grasp.

Some of the couplings Monk documents appear inappropriate and clumsy; large women with small men, or a young woman with a much older man. But one is always left with a sense that these couplings are transitory – they clutch each other so closely and with such a sense of urgency that one is left to conclude they are exploiting the moment for all that it can offer before it has passed.

So what had Monk intended with these photographs? Given that he was a bouncer at the club he might have simply taken them  with the aim of preserving this fleeting night scene for posterity. It seems unlikely he was making an ethnographic study of the curious vicissitudes of the human condition, though that is precisely what they offer us today. And while these photographs evoke a particular time and place, they also exude a kind of universality; in some ways the subjects are not different to those who appear in Nxumalo’s or Lynch’s images, who also engage in what seems to be a futile effort to be liberated from societal chains. - published in The Sunday Independent, January, 2010
Posted by Mary Corrigall at 11:03 PM

Please don't leave unrelated messages for me in comments rather send me an e-mail to mcorrigall@plotbeep.co.za