Jacques Coetzer reflects on the futility of art 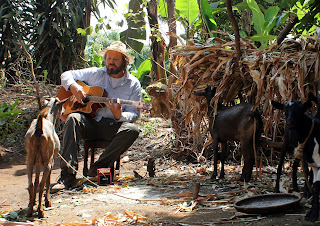 An infectious sense of naive playfulness infuses Jacques Coetzer’s latest exhibition. As the title New Adventures implies, the artist has allowed his fervent sense of curiosity to drive his art-making or escapades, which are inseparable from each other here. For Coetzer, art is about adventure. He perceives it as a zone of endless play in which any idea can be explored,  unravelled or upturned. The results of these activities are propelled by a purpose – Coetzer clearly plots out the reasons driving each adventure –  while similarly it is implied that they serve no actual function – they do not shift anything.  Consequently, his adventures are both significant and futile. This paradoxical notion of art underpins the central work of this exhibition, a video artwork, which contains footage of performances (for want of a better description) that Coetzer enacts in different destinations around the world.

These performances or vignettes are preceded by text and are related to one another only by the fact that they are compelled by the same kind of compulsion: to enact a fantasy of sorts. For all the acts that Coetzer performs are fantasies: dressing up like Elvis and playing on a beach or arranging for a musician to play drums on a concrete island on a busy highway – though they are not quite as whimsical as they appear. Playing music is a recurring action; not only does it allow him to mock the guitar-hero status, but it also introduces another vocabulary, which allows him to summon an abstract and sentimental quality. It also conjures that staple form of popular culture: the music video, which is most typically used to elevate the artist’s status.

Because each scenario reads as quite pathetic and pointless – the man who plays the drums in traffic doesn’t draw attention, the cars pass at the same high pace – this stylised form of expression is subverted or shown to be irrelevant. This is best illustrated via a vignette titled Playing Guitar for Goats, where Coetzer strums his guitar in the company of goats. Obviously goats do not make ideal audience members. Coetzer suggests that the significance of any act is inextricably tied not only to a witness to substantiate it, but also to one’s ability to transform that audience – if only temporarily. This idea is addressed in Long Live the Pacifists and the Activists, where Coetzer plays guitar in different locations around Barcelona – the home of the guitar. Significantly, Barcelona is also the city where Don Quixote’s journey concluded.


A parallel exists between Coetzer and Don Quixote, the central protagonist of Cervantes’s eponymous novel, in that they model themselves on idealised notions of fictional heroes. Coetzer, like Quixote, is a caricature of himself. Their momentous adventures are banal. They do not change or save the world.So in a sense, they are activists doomed to live out a pacifist’s existence.

Coetzer implies that this is the fate of the present-day artist. That while he or she may be able to carve out a place for themselves and tailor-make seemingly monumental activities, ultimately these acts serve no wider purpose. Though on one level Coetzer is, perhaps, disappointed with this condition, he is more resentful of the fact that he has been set up to fail; that such deeply ingrained notions about art and the artist/hero have forced him to strive towards an unattainable goal.

The text that accompanies each performance/vignette is substantial, conferring a narrative quality to the video artwork/film. The text not only contextualises each performance, but also tells the story behind each “adventure”.
What is particularly interesting about these narratives are the paths of associations that they plot; the coincidental ideological connections that bring him to perform each act. They are typically guided by mental and virtual free association – via Google and Wikipedia. And so it is that a whim to pack an Elvis suit to wear in Zanzibar is connected to Nietszche’s line of enquiry in Sprach Zarathustra. In this way, the footage of him on the beach playing the guitar dressed in an Elvis suit is the physical result of a series of virtual actions.
Thus he comments on the role of the internet and the predetermined path of associations that websites such as Wikipedia allow for and how this shapes our worldviews.

This kind of virtual free association also mirrors the artists’ process; how an idea evolves from being a visceral compulsion to a fully formed theory that is rooted in paradigms that have preceded it – such as with Nietszche.
Consequently Coetzer’s process of art-making is made transparent – the text maps the process and the image is the result. That the results are purposively laughable underscores the friction between Coetzer’s childlike curiosity and his acknowledgement of the acts’ pointlessness.

This is an outstanding show that is both humorous and tragic. Though the conclusions that he draws might appear bleak – apropos the futility of art – the novel form of expression he embraces presents  new ways of conceiving of the art product. Coetzer’s refreshing approach, engagement with the epistemological impact of the internet and the relationship between text, ideas and imagery make this exhibition an invigorating experience. - published in The Sunday Indepedent, February 24, 2011
Posted by Mary Corrigall at 11:03 PM