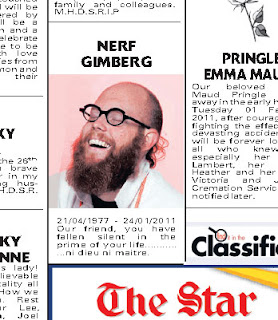 Who would have thought that they would have turned to an almost outmoded form of communication (the classifieds) to announce their inactivity? I think many artists will take comfort in the notion that inactivity is worth declaring. For those like me who have been following the curious behaviour of this hybrid artistic persona, they will note that once again Gimberg Nerf’s appearance has shifted somewhat. Gimberg Nerf certainly is a slippery chap. The black rimmed glasses – a characteristic that could be ascribed to a number of folk in the art world – are still in place but he has a fresher, younger appearance.  This must be Gimberg Nerf’s late summer/autumn 2011 look. I do like it.
Posted by Mary Corrigall at 10:39 PM