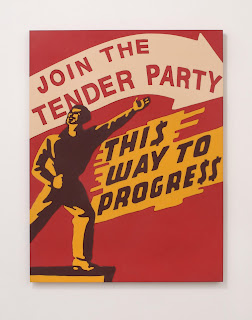 Anger often bypasses reason as it circulates around the mind, gathering energy to force an explosion. Hail to the Thief is just such an explosion. It is not that Brett Murray’s anger is unreasonable: like many South Africans he is enraged by the pervasive level of corruption that has permeated the ruling party. Certainly, it is an inescapable phenomenon of our times. One cannot open a newspaper without being confronted with another story detailing how government or ANC members have exploited their position to line their own pockets. That few individuals are ever held accountable has compounded the sense of outrage that so many justifiably experience.

This perhaps might explain why Murray says the same thing over and over again in this exhibition: he is paralysed by an overwhelming sense of disbelief and powerlessness. An ANC logo is emblazoned with the phrase “For Sale”. “Cash is King” is a slogan that appears below a stylised rendition of Zuma, rendered to resemble a famous poster of Vladmir Lenin, the first leader of the communist Soviet Union. “Join the Tender Party” is the phrase that emblazons a wooden sculpture that is designed to appear like a poster. Like the former artwork Murray draws its language from communist visual and textual rhetoric. In another work Murray borrows the title from F. Scott Fitzgerald’s, Tender is the Night, except here the word “tender” is repeated over and over.

By repeatedly stating the phenomenon Murray evokes or replicates the habitual nature of the corrupt behaviour that all these morally twisted politicos and their collaborators engage in. Consequently this exhibition is almost as excessive as the behaviour it critiques. Certainly some of the visual forms that Murray uses, such as the oversized gold leaf and aluminium coat of arms that dominate walls around the gallery, suggest that he has assumed a mode of expression that mimics the opulent lifestyles which either drive such widespread corruption among the country’s new elite or is a manifestation of extreme wealth.

Like many, Murray is bitter that the ruling party has forsaken the noble ideologies that defined it during the struggle years. He does this quite obviously by “corrupting” well-known struggle posters, slogans and quotes by struggle heroes. In an artwork aptly titled The Struggle, a quote from Solomon Mhlangu has been altered to read: “Tell my people that I love them and that I will continue to struggle for Chivas Regal, Mercs and kickbacks.”
Naturally, it is the last few words that Murray has added. The manner in which Murray “corrupts” these slogans or quotes mirrors the way the ruling party’s belief system has been supplemented by greed and a desire for status objects. It’s as if they are evoking the same rhetoric as before, just adapting the lexicon to accommodate their current self-interests.

Murray’s other strategy is to show how this new ethos has been institutionalised. He achieves this by presenting coats of arms that embody this crooked mentality. Such as the eponymous work Hail to the Thief, which boasts this phrase. This work implies that this is the mantra of the new elites, who seem to prize unscrupulous acts committed in the name of capitalism. It’s a skewed and absurd ethos. One that Murray suggests is related to the completely incongruent confluence of capitalist and communist ideologies. Such completely divergent paradigms cannot be reconciled. Doing so paves the way for a chaotic ideological stance that can be exploited to justify any behaviour. This idea is quite obviously addressed in the work Hold my Hand, which shows two men united, their fists clasped tightly in the air. Visual cues around them suggest that one is an American and the other a communist.

This is a bold and unambiguous exhibition that many will enjoy if only to have their own sense of moral outrage confirmed. Murray does attempt to provoke his audience, particularly with a work called Grave Turners, where he lists the names of dead struggle heroes, giving them nicknames that suggest that they are implicated by the corrupt actions that their living counterparts are performing. As such Steve Biko is called Steve “kick-back king” Biko. This artwork implies that had Biko lived he too might have gone down this path, but it also directs attention to the fact that the antics of the living, undermine the values Biko died for.

This is not exactly a new idea. And this is the main failing of this exhibition: the observations Murray makes are not new: they have been articulated over and over in the pages of newspapers. That Murray has assumed a form of expression that doesn’t allow for any ambiguity also ensures that this state of affairs is one-dimensionally portrayed. It’s too simplistic: the ruling party and its followers are not an homogenous group.

Without a doubt he is critiquing a social and political phenomenon which appears to be fixated with the superficial characteristics that express status. Nevertheless one can’t help wishing that Murray had dug beneath this façade. Corruption is a real problem and there seem to be few explanations beyond greed to account for it. One would expect an artist to be able to cut through superficial observations, and uncover the dynamics that propel it. This topic demands as much. Murray’s preference for the language of design prevents him from probing beneath the surface. Of course, he doesn’t want to. It’s not just that he is too angry to make sense of it all, but perhaps in so doing he realises these crooked characters might be let off the hook. - published in The Sunday Independent, December 19, 2010
Posted by Mary Corrigall at 10:14 PM

“The manner in which Murray “corrupts” these slogans or quotes mirrors the way the ruling party’s belief system has been supplemented by greed and a desire for status objects.” How can a ‘belief system’ be supplemented by greed? More interesting is the way that the rhetoric of liberation has been ‘corrupted’ (embellished, like Murray icons) into a defence of what a neo-liberal status quo (to deploy some bullshit of my own) while retaining some of the outward form of egalitarianism, and by intentionally blurring ethnicity and class.
“The observations Murray makes are not new: they have been articulated over and over in the pages of newspapers.” Can Murray’s formal work be reduced to ‘observations’? What about the visual effect of co-opting Soviet imagery into ‘corrupted’ SA post-liberation context? What are the aesthetic implications?
“One would expect an artist to be able to cut through superficial observations, and uncover the dynamics that propel it.” Why?
“Murray’s preference for the language of design prevents him from probing beneath the surface.” In what way? Why is this a problem? In what way would the language of the academy help with this probe?
“It’s not just that he is too angry to make sense of it all, but perhaps in so doing he realises these crooked characters might be let off the hook.” Is there any evidence that he holds this belief?