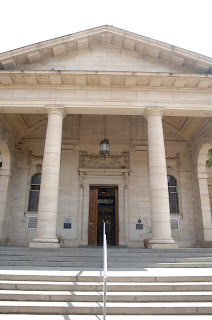 In my opinion JAG is neither. To tie in with the 100 year anniversary of JAG’s collection I wrote a feature on the institution in which I reflected on how its origins largely shaped its life span thus far (see below). Though major shifts in the 1980s accredited to Christopher Till’s  vision really set this public art institution on a new path, this gallery does not set the trends. Commercial galleries in this country determine what is ‘good’ art, and who the up-and-coming artists should be. With an emphasis on retrospectives, JAG comes to the party after the fact: after an artist has secured a reputation. The Nando’s Project Room did serve as a platform for young artists but the quality of the work wasn’t consistent, little was done to promote the exhibitions. Nando’s have pulled sponsorship so that space no longer exists.

I am not comfortable with commercial galleries leading the art scene  – as obviously a commercial agenda informs their choices and many of the gallerists don’t know much about art or even grasp the significance of the work they sell.  But the fact is the commercial galleries adapted to shifts in the country much quicker than JAG and more readily promoted local artists – they democratised art.  JAG has never really caught up and has since 1994 it’s curators have been preoccupied in reclaiming the history of the black artists that had been previously excluded/ignored. This is valuable work, though sometimes the glorification of these artists has left no room for critical engagement with the work and the narratives around these exhibitions tend to centre on the political aspect of the work or the difficulties in making the art rather than on the work itself.

Antoinette Murdoch is keen to shift the power dynamics between the commercial and public art institutions but during my discussions with her, it seemed she had no clear vision or knew how to re-determine this status quo. Perhaps JAG’s role should be in rewriting history. The City of Joburg is now establishing a new public art space in Sandton near the Gautrain station in that area, according to Steven Sack. It will be a public/private endeavour - most likely this will be the new model for public institutions in this country. The advent of this new gallery is good news – the more public art spaces, the better this will be for artists (and critics) and the discourse on art in this country. But given that the City has been unable to suitably fund and support JAG and Africa Museum, it makes no sense to start up a new space. This new gallery could also perceivably render JAG’s position even more peripheral.

My feature:
Art has a smell. It’s |a subtle aroma, suggests Antoinette Murdoch, the director of the Johannesburg Art Gallery (JAG), as we stride along a narrow corridor passing large boxes containing artworks. |When we squeeze past the heavy door where the dated works are stored, I twitch my nose hoping to catch a whiff of the scent that the old masterworks might exude. With many dating from the early 18th century, it’s perceivable that they might give off an odour – time always leaves a trace.

It seems incongruent that all these valuable artworks – which include Irma Sterns, the Dutch Masters and a priceless selection of African headrests – have been consigned to the least noteworthy room at JAG. It’s a cold, barren basement and the noisy reverberation of an air conditioning system in the corner suggests that it is the engine room of this rather imposing ship that has been moored next to Joubert Park for nearly a century. Certainly its grand neoclassical exterior and allusions to high culture now seem out of place in its inner-city setting where bargain goods are displayed on cardboard boxes along the pavement.

Inside the gallery you can’t hear taxis hooting or the distorted music that plays out of the inexpensive speakers at the entrances of shops. The first painting I encounter in the historical vault is John Millais’s Fringe of the Moor (1874). It presents a tranquil rural British idyll. It looks naked without the external armour that a gallery interior engenders. It is propped up against a wall, waiting to be restored. A hundred years ago, when the British curator Hugh Lane bought this work for JAG – or the Municipal Gallery of Modern Art as it was known then – this painting was thought to epitomise the apotheosis of “modern” (not to be confused with modernist) British art. Thus it would aid in bringing the philistines that colonised early Joburg up to date with culture. Or so thought Florence Phillips, the Joburg socialite and philanthropist who first conceived of an art gallery for Joburg.

It is among faded documents, old photos and books that boast Phillips’s curlicue scrawl inside that I trace the history of this public institution and the personality who established it. The institution’s genesis is inseparable from Phillips, who is described by one writer as “opinionated, arrogant and self-important”. These might have been just the right characteristics to get an art institution off the ground, but they also seemed to have had a negative impact on the institution’s relevance and standing.

Some South African Recollections (1899), a book containing Phillips’s musings on life in Joburg, is proof not only of her sense of importance but also, regrettably, her prejudiced outlook. A chapter on “Kaffir miners” is cringeworthy reading – though it gives one a view into Joburg of yesteryear. It also explains the rather contradictory ideas driving the gallery: though Phillips wanted it to play a role in “nation building” – this phrase was not just exclusive to the post-apartheid era – her focus was on collecting and displaying almost exclusively European art, with an emphasis on British, French and Dutch expression. Undoubtedly her emphasis was in unifying a segmented white population largely consisting of French, British and Dutch origins, but it is telling that, aside from a few Anton van Wouw bronzes, no South African schools of painting were included.