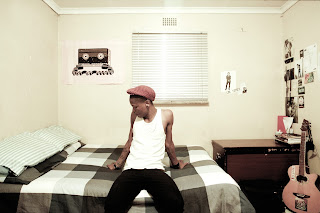 The young photographer Musa Nxumalo (pictured above in a recent self portrait) scooped an ACT Award last week for Visuals Arts. About a month ago I happened to interview him in connection with a story I was writing about the youth – the titular Generation Disappointment. What was most interesting about my encounter with Nxumalo was that I discovered that this young photographer had with his Alternative Kidz series taken the notion of the ‘constructed’ photograph to a new level in the sense that he had played a primary role in creating the social subculture that he would photograph. Thus he wasn’t simply a participant in the alternative Rock scene in Soweto but he had actually had a hand in creating that scene. From his photographs one would not be mistaken for thinking that the subculture which he documents is a growing one, however, it is incredibly small: in fact so limited and fleeting that it is only really given life through Nxumalo’s photographs.

Nxumalo was inspired by documentaries which mapped the rise of rave culture in Manchester. He yearned to be part of a similar youth movement. When he looked around there was nothing like it that he could latch onto so he created a movement with the idea that he could document it at some later stage. In other words he conceived of a society for the purposes of documenting it. In this way Nxumalo’s construction of his photographs extends far beyond the moment he stood behind the camera lens.

In my feature story below,which was published in The Sunday Independent a few weeks back, my interest was in contextualising Nxumalo’s work within the broader sociopolitical context:

With dreads and a tattoo, Thato Woody Khumalo looks a bit out of place in the non-descript rural setting. He seems completely unaware of Musa Nxumalo’s penetrative camera lens as he gazes deeply into a pool of water in front of him. It is not a narcissistic compulsion which has him contemplating his reflection in the water but rather an enquiring stare that one imagines is compelled by the brand of confusion that grips twentysomethings attempting to come to terms with themselves and their place in the world. The barren rural setting succinctly articulates the sense of alienation that Khumalo and his band of punk-rockers experience in Joburg, in Soweto, where they are outsiders.

Nxumalo’s image of Khumalo could function as a poster for this new supposed Generation Disappointment. His contemplative stare could be read as a despondent gaze. Nevertheless his dress, demeanour and the setting suggest that Khumalo is not part of this group of young people pegged as impatient materialists disappointed by the fact that they have been unable to fast-track their way into cushy well-paid jobs.
Khumalo and the photographer Nxumalo are part of one of the counter-cultural youth movements emerging in this country. It is these rebellious voices that are foregrounding the flaws in our society and driving us towards a new status quo. The youth are like a mirror of our society. So certainly if they are despondent it is not a situation of their own making. It is an expression of the environment that has shaped them.