Gugulective, Goniwe and the Politics of Race, again. 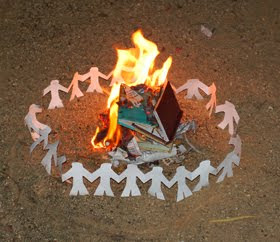 At the Bonani Africa Photography conference held in Cape Town this past week (ironically) titled, Beyond the Racial Lens The Politics of South African Documentary Photography, Past and Present, Thembinkosi Goniwe took issue with the comments I made in an earlier blog on Gugulective. While I was delighted that a post on my blog might be causing a stir his observations were totally unfounded.  His suggestion that I didn’t believe that artists working on the so-called periphery should be showing in commercial galleries conflicted with the views I had expressed. If he had in fact read my blog post carefully he would have noted that because I had been lobbying for artists who operated outside the commercial gallery circuit to be shown at the Goodman’s Project Space I was disappointed that Gugulective hadn’t delivered.

He also suggested that this piece of writing was indicative of a tendency in (white) critics and arts writers in this country to foreground black artists’ biographical history rather than in engaging with their work. As I stated in my rebuttal at the conference I agree with this latter point - albeit that I think white artist's are often subject to this kind of reporting - but do not count myself as one of these writers. I do not believe that I paid any attention to the biographies of any of Gugulective members in my blog post. I simply referenced where they had been exhibiting before. The reason I did not discuss Gugulective’s work in my blog post in any depth was because I felt that there was little depth to the work: they had translated their stated intentions in such a literal way that there was no need for me to unpack the image - a fact which pained me given that I had implied in an ART SA article that the likes of Gugulective should be given such a platform.


Goniwe should have read my blog post with the kind of care that he urges critics to extend to the work which they appraise. Though I believe that he had an axe to grind because I did not give his exhibition "SPace" a favourable review, I think that he also chose to assume that because I am white I assess the work of black artists differently to their white counterparts.  He should not make assumptions about me and my brand of criticism based on my race. By doing so he is enacting precisely what he is accusing me of doing.

Art criticism cannot flourish in this country if every time a white critic gives a black artist’s work a bad review they are accused of being a racist. Why is nothing said when a black artist’s work is received favourably when surely the same prejudice must also inform this reception? As it is I believe that many critics and writers censor themselves when writing about black artists work out of fear of appearing not to be politically correct. In this context white artists work is being subject to a more rigorous form of criticism than their black counterparts.  This is not a healthy situation and it is one that is further perpetuated if every time a white writer or critic is attacked or accused of racism when they make a negative comment about black artists work.

P.S. Just one final point that I want to make about Gugulective. My opinion about their show at Goodman Gallery's Project Space is an opinion about THAT exhibition and does not reflect how I feel about them as people or artists. They are young artists who simply weren't ready for a solo exhibition and I do not discount the fact that they may startle me with their art sometime in the future.
Posted by Mary Corrigall at 6:38 AM No comments: