So who's the fairest photographer in the land? 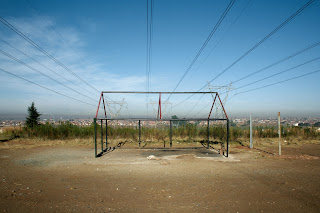 On Saturday I joined David Goldblatt, Riason Naidoo, Thembinkosi Goniwe and Omar Badsha in judging the Bonani Africa Photography competition. Desperate to chillax after a heavy week I wasn’t totally looking forward to the task. But I really, really enjoyed the experience; though there were over fifty photographic essays to view on the whole they were mostly of a high standard so it was a pleasure sorting through them. It was interesting to see how some established names in the art/photo world compared with newcomers and photo journalists making the cross-over into art photography. Naturally, it was a pleasure to spend time with Goldblatt and I relished hearing his views on the work as we wrestled over who the three finalists should be. I learnt a lot about the mechanics and poetics of photography listening and arguing with Goldblatt. I do hope that when I am 79 years old that I am as sharp and perceptive. It was also interesting to gage where Goniwe and Naidoo’s heads are at too. It was fascinating to observe the kind of photographic work and the predominant themes that are emerging in this realm of visual production and to see the photographs that don’t make into commercial galleries. Largely the work wasn’t highly conceptual; for art-artists entered the competition -  the bulk of the work was more journalistic in its orientation in terms of social subject-matter with many essays documenting communities on the fringes, the fall-out from the xenophobic attacks and the city of Joburg (I am starting to tire of this theme).
What was interesting was the way in which we reached consensus quite quickly; it seems that a “good” photograph is easy to identify – albeit that it is difficult to verbally articulate the elements that contribute to its success. In other words the tangible qualities that characterise a successful shot are paradoxically at times just as intangible. This was particularly the case with one of the winners, whose name I obviously can’t reveal but whose work is simply sublime and while one can ‘name’ some of the reasons why this is so, it is similarly hard to really nail down that exact element that separates it from the rest. It was a really stimulating day and when we finally sat down to lunch we ended up tackling that old when-is-photography-art chestnut. Yeah, right.

*The photograph above was not one of the entries; it is a photo taken by Mkhize Khabazela from the Market Photo Workshop. I just picked this one out to tie in the with soccer frenzy that seems to have gripped Joburg
Posted by Mary Corrigall at 10:26 AM No comments: